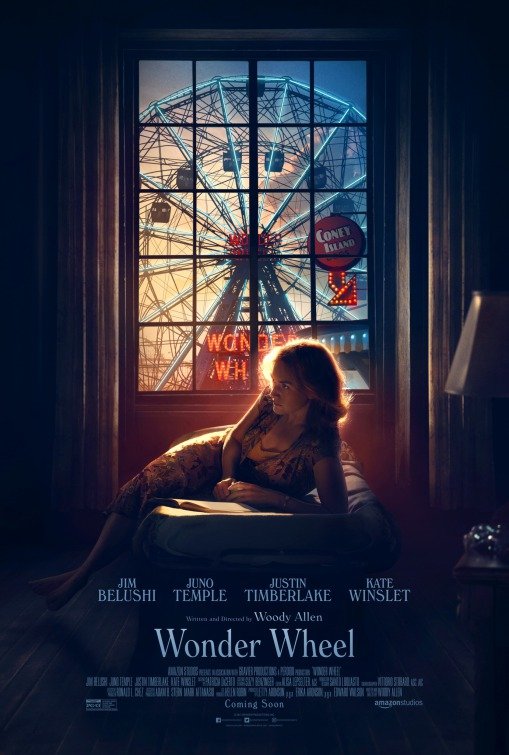 WONDER WHEEL follows the stories of four characters on Coney Island, living under the neon lights of the giant Ferris wheel. Humpty and Ginny are unhappily married and just living to survive when Humpty’s daughter returns. She’s on the run from New York gangsters after she married one, left him and told too much to the FBI. Ginny finds an unlikely romance with the local lifeguard, which gives her a hope for the future she hasn’t had in years. However, everything changes when the lifeguard first lays eyes on Ginny’s beautiful stepdaughter.

Set in the 1950s, WONDER WHEEL is told with Woody Allen’s classic style of unconventional relationships, New York and rambling, nonsensical monologues. This movie is beautifully shot, with vivid colors that constantly match the emotions revealed on the screen. However, it contains an extremely high amount of questionable content, as it revolves around a love affair of a married woman, and main characters who have very little sense of a moral compass. WONDER WHEEL has a high amount of strong profanities too, so media-wise viewers will want to stay away.

(RoRoRo, B, LLL, VV, SS, N, AA, D, MMM) Overarching Romantic worldview throughout this movie, almost all main characters follow their own intuition with little regard to any type of a moral compass, and much of the morality is relative, but the movies does show a little bit that bad decisions lead to bad consequences; at least 40 obscenities and 33 strong profanities; moderate amount of violence as there is implied domestic abuse when the husband drinks, the dad is accused of hitting the son because he stole from him, although nothing is shown, only mentioned, the son asks his mom why his stepfather hits her, the mom and dad at different times throw things violently when they get upset, when the dad drinks he grabs his wife and threatens her, multiple characters make violent threats to each other, such as “I will throw you through that window” and “I swear to God I will smash you”; strong sexual content where one of the main plotlines centers on an affair between a married woman and another man, implied adulterous sex multiple times, and one depicted sex scene; upper male nudity, women in 1950s style swimsuits, main female character is shown multiple times in slip or lingerie, and man is shown taking off his pants; one of the main characters is a recovering alcoholic and hits people when he becomes intoxicated, the wife hides a bottle of liquor underneath the sink and takes swigs every so often, people have casual beers in a bar, a few examples of drunkenness as the husband “falls off the wagon” when he hears of devastating news and goes to a bar and returns inebriated, in the same situation the wife also becomes drunk by herself when she is aware of the bad news, a few situations where the characters have casual drinks with their dinner; almost all of the characters smoke cigarettes, and main female character constantly gets migraines when she stresses out and takes prescription medication; very strong miscellaneous immorality includes many examples of family dysfunction, female character cheated on her husband, and he left as a result, woman married another man and cheats on him as well, father and daughter are estranged after she marries a New York gangster against father’s will, mother and son are constantly fighting because the son compulsively sets fires everywhere around Coney Island and is always in trouble with the police, boy steals money from his stepfather, wife steals from her husband in order to buy her lover a birthday gift, boy disobeys his parents and skips school, boy calls his stepfather names and says that he hates him, boy is always asking where his real father is, and main male character’s friends joke about his pretty daughter and her getting pregnant.

WONDER WHEEL is the latest of the Woody Allen creations, pairing with Amazon Studios to produce this star packed movie. Set in the 1950s on Coney Island, the story is narrated from the perspective of the beach lifeguard, Mickey, played by Justin Timberlake. As an aspiring playwright, he tends to see the world from a very Romantic point of view, relishing exciting experiences. Four characters drive this movie as it focuses on how their lives intricately intertwine on this small island in New York.

Former aspiring actress, Ginny (Kate Winslet), now works in a clamhouse restaurant and has become a very emotionally unstable person because of her life experiences and choices. She reluctantly married Humpty (Jim Belushi), in an effort to ease the pain of her former husband leaving her after she had an affair.

Humpty’s daughter, Carolina, has just returned to Coney Island after leaving five years prior to marry a New York gangster. Not approving of the match, Humpty has disowned her and wants nothing to do with her. Unfortunately, she has babbled a bit too much of what she knows to the FBI, and now her husband’s friends are coming after her. Humpty decides to shelter her, and she gets a job working in the same restaurant as his wife Ginny.

Stressed out one day with her life grievances and her pyromaniac son, Ginny takes a walk on the beach on a stormy evening. Because the beach is closed, the on-duty lifeguard, Mickey, takes her inside. They sit on the boardwalk and have a drink, discussing their lives thus far. Smitten by this melancholy, tortured woman, Mickey asks to see her again, and so a love affair begins.

Ginny is now suddenly rejuvenated with this newfound infatuation, and Humpty is similarly happy again, having Carolina back in his life. However, when Ginny and Carolina are taking a stroll on the boardwalk and bump into Mickey, jealousy begins to grow in Ginny as she suspects an affair is growing between the two young and beautiful people. The more of Carolina that he sees, the more of an attraction begins to grow inside of Mickey for his lover’s step-daughter. Completely ignorant of the affair between this handsome lifeguard and her father’s wife, Carolina begins to become attracted to Mickey as well. This relationship breeds nothing but trouble for Humpty and Ginny, as they try to cope with what is about to come.

WONDER WHEEL is the 54th movie of Woody Allen’s to direct, and he seems to be becoming less and less polished of a filmmaker. True to Allen’s style, this movie is packed with rambling monologues, although they are not quite as fascinating and seem to be mostly nonsensical. The cinematography and poetic lighting bring a beautiful visual stimulation to the screen, and it’s not hard to maintain interest in this story so full of conflict. However, toward the end, when everything is meant to come to a meaningful climax, the scenes almost seem to be improvised by the actors, and it comes across a bit messy. It can be a bit difficult to be emotionally invested in these events or these characters because of how anticlimactic the story becomes.

Dominated by a Romantic worldview, this movie does teach that bad decisions lead to bad consequences, but that people are led primarily by their emotions, without any form of moral compass. There’s lots of foul language, especially many uses of GD and many profanities misusing the name of Jesus. With the majority of the storyline focusing on an affair between a married woman and a young man, and then that same man with her stepdaughter, there’s a high amount of questionable content throughout this movie. So, media-wise viewers will want to stay away from WONDER WHEEL.