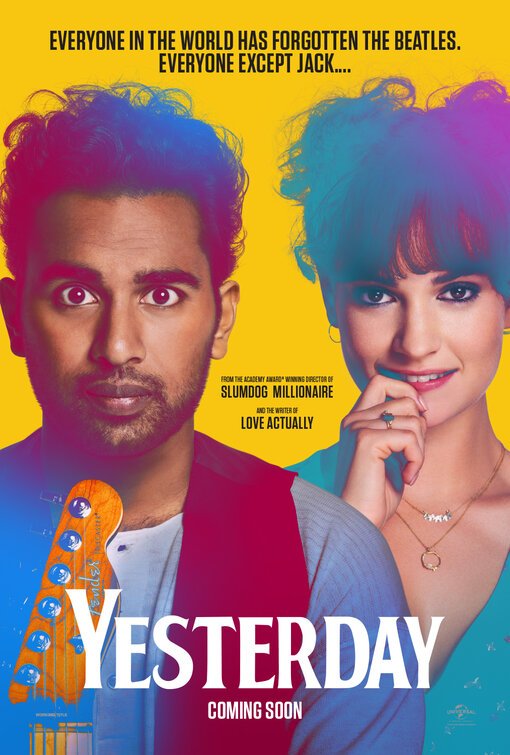 YESTERDAY is the musical fantasy tale of a young struggling musician who wakes up in a world without any knowledge of the Beatles and decides to claim their songs as his own. YESTERDAY is a delightful morality tale with a positive message to always tell the truth, but it’s marred by several strong profanities and some emphasis on romantic love. Caution is advised for teenagers and adults.

YESTERDAY is a delightful musical fantasy. Jack is a struggling musician ready to give up after a disastrous performance. Ellie, his manager friend, is heartbroken by his decision. She tries to convince him a miracle might be around the corner. While riding his bike home that night, a brief worldwide power outage occurs, and Jack’s hit by a bus. When Jack awakens in a hospital, no one around him knows who the Beatles are or recognizes their songs. So, he decides to claim the songs as his own.

YESTERDAY is terrifically entertaining. The actors give marvelous performances. YESTERDAY has several strong profanities, but no violence or explicit nudity. There’s an implied sex scene between the musician and his friend, but they get married in a church and are shown having a happy marriage with children. Eventually, the musician must face up to his guilt for stealing the Beatles songs. A key line in the movie is, “To be happy in life, tell the girl you love that you love her and always tell the truth.” MOVIEGUIDE® advises caution for teenagers and adults.

(CC, BB, Ro, LL, S, N, A, M):
Dominant Worldview and Other Worldview Content/Elements:
Strong Christian, redemptive, moral worldview extols telling the truth, marriage, having children, hoping for miracles, repentance, getting rid of guilt by confessing and seeking forgiveness, and ultimately doing the right thing, and includes a wedding that occurs in a Christian church, but marred by some Romantic elements extolling romantic love (a key line in the movie is, “To be happy in life, tell the girl you love that you love her and always tell the truth”)
Foul Language:
Five “d” and multiple "s" obscenities and eight strong missuses of the name of Jesus, and multiple OMG's
Violence:
No violence
Sex:
An unmarried couple is shown kissing passionately, and then the man stands shirtless with the woman hugging him from behind in the obvious but implied aftermath, but the couple is immediately afterward shown getting married in a church wedding and having a beautiful and happy marriage with children
Nudity:
Upper male nudity
Alcohol Use:
Some alcohol use
Smoking and/or Drug Use and Abuse:
No smoking or drugs; and,
Miscellaneous Immorality:
Movie centers on the moral and ethical crisis created by a young musician who has the opportunity to earn worldwide fame and fortune by claiming the classic Beatles songs as his own, so he lies throughout much of the movie but ultimately lands on the side of right and goodness.

You probably can’t go to any civilized place on the planet without hearing the music of The Beatles on a daily basis. Their music has dominated the pop culture landscape for well over 50 years, with 27 Number One singles in the US alone and well over 100 million albums sold.

In YESTERDAY, the latest movie from Danny Boyle (perhaps the most eclectic director working today, e.g. SLUMDOG MILLIONAIRE, 127 HOURS, TRAINSPOTTING), a young struggling musician named Jack (Himesh Patel) is ready to give up on his ambitions after a disastrous appearance at a music festival. Ellie, his longtime friend and manager (Lily James), is heartbroken by his decision. She tries to convince him that a miracle might be just around the corner. It turns out she’s remarkably prescient.

While Jack rides his bike home that night, a worldwide power outage occurs for 12 seconds, and he’s hit by a bus in the darkness. When he awakens in a hospital with his two front teeth missing, he also finds that no one around him knows who The Beatles are or recognizes any of their songs.

Searching the Internet, he finds there are literally no references to The Beatles, and his record collection is devoid of their albums as well. The Rolling Stones exist, but the Beatles-derivative band Oasis has also been wiped off the planet’s collective consciousness. Jack sees a golden opportunity in all of this. So, he proceeds to play from memory and record as many of the Fab Four’s tunes as he can, while claiming the songs as his own.

Jack immediately finds himself on a rocket ride to fame, as present-day superstar Ed Sheeran (playing himself with comic aplomb) sees him on a local TV show and hires him as his opening act on tour. However, when Jack starts getting more fan mania than Ed himself and Ed’s comically ruthless manager (Kate McKinnon) pushes to make him the biggest artist of all time, things start to get complicated, in both Jack’s professional life and in his relationship with Ellie.

YESTERDAY is a terrifically good time at the movies, with Boyle deftly handling the fantasy, comedy and romantic elements with total grace. Patel’s performance as Jack should be an instant star-maker for the actor, who’s previously only worked in British television but has a magnetic ability to earn empathy for a character who might have just seemed like a selfish con artist in the hands of most actors.

As Ellie, Lily James is clearly channeling a young Keira Knightley with irresistible winsomeness, but the world needs more of that kind of delightful charm, especially when Knightley has matured into more complex roles. Sheeran brings a surprising comical zing to his part. Especially when he’s increasingly baffled by Jack’s inexplicable ability to craft timeless classics like “The Long and Winding Road” in a bar bet on who can compose the best song within ten minutes. McKinnon brings a zesty sense of comic ruthlessness and greed to the table, delivering some of the movie’s funniest moments.

The screenplay is by Richard Curtis, the mastermind of rom-com classics FOUR WEDDINGS AND A FUNERAL, NOTTING HILL and LOVE ACTUALLY. Curtis grounds everything in relatable characters and, of course, ample opportunities to hear some of the greatest pop songs ever, through the fresh voice and musical arrangements of Jack. Curtis layers in some intriguing moral quandaries as well, as Jack lives in constant fear of someone catching on to his ruse, or the world suddenly remembering The Beatles again. Nearly everyone has faced a moment in life where they could get away with a scam or a shortcut that’s highly questionable. The way that Jack faces his moment is both moving and entertaining.

YESTERDAY also provides some thoughtful insights into the creative process of great songwriting, as Jack and his producers put their own fresh tweaks on the tunes, turning “Help” into a revved-up rocker that sounds like a Ramones tune, for instance. Also, when Jack realizes he’s going to face questions about what inspired each song, he heads to key places like Liverpool to try and get his own understanding of places like Penny Lane and Eleanor Rigby’s grave.

Morally, despite some strong profanities, YESTERDAY is one of the more wholesome mature audience movies to come down the pike in a long while. It has no violence or explicit nudity. There’s an implied sex scene, but the movie also winds up having a beautifully positive take on marriage and parenthood. Also, Jack and Ellie are refreshingly matter of fact about their belief in God when discussing miracles early in the movie. Ultimately, Jack must face up to his guilt for, in effect, stealing the songs the Beatles created. A key line in the movie is, “To be happy in life, tell the girl you love that you love her and always tell the truth.”

However, the most fascinating part of this unexpected charmer is being forced to consider what would happen if the whole world was deprived of The Beatles’ music. YESTERDAY encourages viewers to appreciate the magical soundtrack their music has played in everyone’s life since the early 1960s and will hopefully continue to color their lives for generations to come. In the final analysis, music is a marvelous gift from God, and the often beautiful, joyous and sometimes haunting melodies crafted by The Beatles should be considered part of that divine gift, even when their music is just a celebration of romantic love.