"Escape from Brutality and Cruelty" 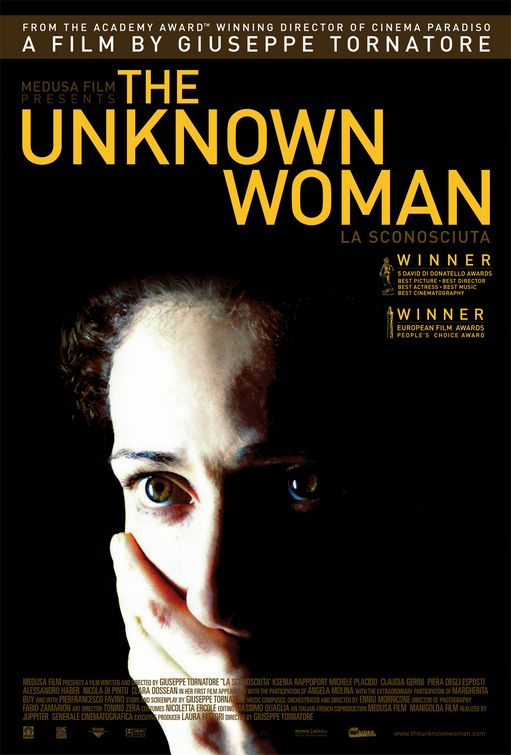 THE UNKNOWN WOMAN, a movie from Italy, stars Russian actress Xenia Rappoport as Irena, a young Ukrainian immigrant in an Italian city fixated on getting a job in an apartment building. Irena spies on an Italian couple, Valerie and Donato Adacher, and their young daughter, Thea. Through devious means, she gets hired by Valerie and begins a tentative, but ultimately strong, friendship with the young Thea. A series of shocking flashbacks reveals that Irena used to be a sex slave serving a brutal Ukrainian pimp. Irena thinks Thea is her real daughter, but her awful past begins catching up with her. This results in several tragic outcomes and a bittersweet ending.

THE UNKNOWN WOMAN has the feel of a Hitchcock thriller, aided by the lyrical, evocative music of Ennio Morricone. The sequences in Italy are the most provocative and the most touching. They are accompanied, however, by brutal, explicit sadomasochistic flashbacks to the abuse Irena suffers in the slave trade. The frank flashbacks are disturbing. They take away from the power of the rest of the movie, as well as the viewer’s enjoyment. They also gut the movie’s more uplifting aspects.

(Ro, Fe, B, L, VVV, SSS, NNN, A, DD, MM) Light Romantic worldview where social circumstances turn people into monsters, with some light feminist content and some light moral aspects to the story; about four to six obscenities; very strong violence with blood includes flashes of sadomasochism and rape, a stabbing, an accidental death, a woman falls down stairs and blood pours under her head, implied drowning, brutal slapping, images of a corpse, woman tries to toughen up bullied little girl by pushing her down on hard floor very strongly and forcing her to keep getting up, and threats of violence; very strong sexual content includes flashes of rape and sadomasochism, depicted fornication, implied fornication, prostitution and sex slavery, women pose naked for pimp or pimp’s customer as he considers which one to pick; explicit shots of upper, rear and full female nudity and upper male nudity; alcohol use; smoking and implied drug selling; and, deceit, breaking and entering, spying, lying, little girl bullied, stealing.

THE UNKNOWN WOMAN is a non-linear thriller from Italy about a Russian woman who insinuates herself in an Italian family to befriend the daughter she birthed while serving as a sex slave in Ukraine. Some brutal, explicit sadomasochistic flashbacks to the abuse the woman suffers in the sex trade make this movie unfit for even adult viewing.

The movie stars Russian actress Xenia Rappoport as Irena, a young Ukrainian immigrant in an Italian city fixated on getting a job in an apartment building. Irena spies on an Italian couple, Valerie and Donato Adacher, and their young daughter, Thea. She becomes friends with the family’s long-term maid and nanny, Gina, to the point of stealing and copying Gina’s keys so that she can search for something in the family’s apartment.

Irena clearly wants to work for the Italian couple, but she finds out that Gina is likely to be employed with them for a long time. So, Irena deliberately trips Gina, who falls down the spiral staircase in the apartment building’s hallway. A pool of blood spreads from Gina’s head, and only later do viewers discover that a paralyzed Gina survived the fall.

Irena successfully gets hired by Valerie and begins a tentative, but ultimately strong, friendship with the young Thea, who resembles Irena but doesn’t resemble Valerie. A series of shocking flashbacks reveals that Irena was a sex slave serving a brutal Ukrainian pimp, but escaped after apparently killing the evil man. Irena thinks Thea is her real daughter and learns that Thea was indeed adopted from Ukraine. The pimp is still alive, however. He and his goons finally come looking for Irena, who stole his hidden stash of money. This results in several tragic outcomes, some unexpected twists and a bittersweet ending.

THE UNKNOWN WOMAN has the feel of a Hitchcock thriller, aided by the lyrical music of Ennio Morricone, who at times even seems to be imitating the music of Bernard Herrmann, Hitchcock’s famous composer for such iconic movies as VERTIGO, PSYCHO and NORTH BY NORTHWEST. The Irena character also may remind some knowledgeable moviegoers of the woman in Francois Truffaut’s homage to Hitchcock, THE BRIDE WORE BLACK, also composed by Herrmann.

The sequences in Italy are the most provocative and the most powerful. They tell an emotional story about one woman’s attempt to escape brutality and cruelty. Xenia Rappoport gives a wonderful performance in those sequences. They are accompanied, however, by brutal, sadomasochistic flashbacks to the abuse Irena suffers in the slave trade. Included in those scenes, many of which are composed of extremely short shots that suggest rather than show what’s happening, are many shots of explicit nudity, including full female nudity.

This abuse of the viewer’s eyes and soul takes away from the power of the rest of the movie. It also guts the movie’s more morally uplifting positive aspects. The movie also contains disturbing scenes where Irena tries to toughen up the young girl, who has become the victim of some school bullies. These scenes and other scenes imply that some of the brutality from which Irena is escaping has rubbed off on her.