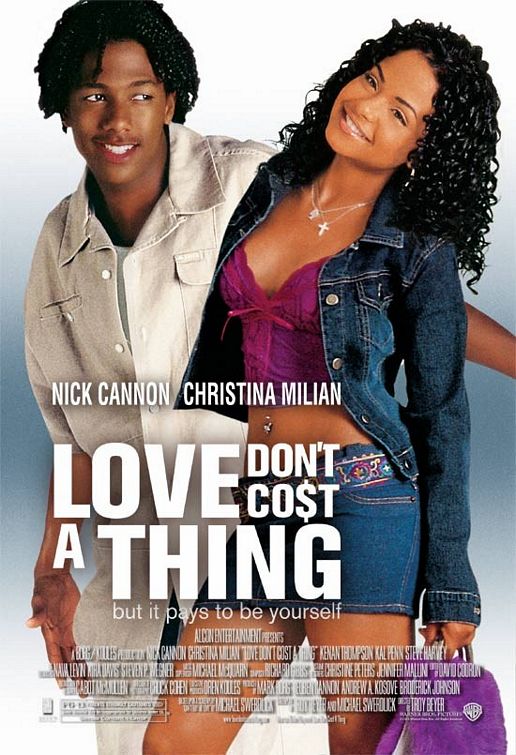 LOVE DON’T COST A THING stars Nickelodeon star Nick Cannon as Alvin Johnson, played by Nickelodeon’s Nick Cannon, is your everyday high school genius/loser. He is portrayed with all the stereotypical trappings of the brilliant outsider. Alvin has a crush on popular cheerleader Paris Morgan, nicely played by Disney alum Christina Milian. When Paris needs a favor from Alvin, Alvin pays Paris to pretend to be his girlfriend for two weeks so that he can get the popularity he craves. Although this movie is not so smart, Alvin learns that it’s better to be smart and kind rather than dumb and popular.

Ultimately, LOVE DON’T COST A THING uses negative images to communicate a positive premise, which says honesty pays if you’re true to yourself. Using a script from a 1987 movie, the filmmakers communicate this positive message, however, through a humanist Hollywood lens blurred with stereotypes. Their movie also contains some graphic talk about condoms in scenes where Alvin’s father tries to relive his life as a “player” through his son. There is also plenty of foul language, though much of it is light. MOVIEGUIDE®, therefore, advises extreme caution for mature audiences.

(H, B, Ab, Pa, LLL, V, SS, N, A, M) Light humanist worldview in comedy about a teenager trying to buy his way into being popular, but who finds it’s better to just be yourself with some moral elements, including a moral premise that says honesty pays off, but there’s also a joke about a very short, one-word prayer during a dinner scene, and some pagan, hedonistic lifestyles depicted; about 27 obscenities and one light profanity; some light violence such as pushing, shoving, and grabbing; father engages in graphic talk about condoms with son, miscellaneous sexual references and double entendres, movie implies couple begins making love in secluded area of beach, and boy grabs girl’s buttocks; some naturalistic nudity of men, plus some female cleavage and women wear skimpy outfits, bikinis, and underwear; brief underage alcohol use; no smoking; and, cheating, lying, teasing, and bullying.

If absolute power corrupts absolutely, then would it be safe to say that absolute popularity does the same thing? If you’re a part of the in-crowd at a high school anywhere in America, your answer would probably be a resounding “no,” but in her latest offering, LOVE DON’T COST A THING, director Troy Beyer tries to make her audience arrive at a different response. Based on the 1987 teen flick CAN’T BUY ME LOVE starring then teen heartthrobs, Patrick Dempsey and Seth Green, Beyer, with the aid of Michael Swerdlick, the screenwriter of the original film, try to put a fresh face on the movie’s basic premise by literally “colorizing” it. Really! Beyer changes the previously all-white cast to predominantly black. While Ms. Beyer should be commended for giving a host of young, talented African-American thespians some much-needed big screen time, they should also be reprimanded for failing to put a new spin on the hackneyed and cliché story of the high school loser who seeks acceptance/popularity through cool kids’ affirmation followed by the ultimate moral demise of said loser.

If you’ve seen the movies GREASE or CLUELESS, or any of the teen-oriented sitcoms that pass for witty entertainment during Saturday morning network programming, a la SAVED BY THE BELL, you need not read any further. In the event that your television and VCR have been in the shop for the past three decades, here’s the gist of LOVE DON’T COST A THING.

The film’s protagonist Alvin Johnson, played by Nickelodeon’s Nick Cannon, is your everyday high school genius/loser. He is portrayed with all the stereotypical trappings of the brilliant outsider. For instance, he sports an uncoordinated, eclectic style of dress; has loving and somewhat quirky parents whom he respects and obeys; hangs with a small group of brainiac friends; maintains a solid work ethic; and, holds third place standing in a nationwide engineering contest. Sadly however, the audience discovers that Alvin is not content with his life. For him, his intelligence doesn’t suffice, his family’s love isn’t enough, and his friends’ camaraderie doesn’t satisfy a burning need. For Alvin, the loser, the grass is greener on the “cooler” side of the school hallway, the side where only the popular students have lockers. As in most all Hollywood-formula movies about young people in high school, Alvin’s passport to “Popularity Place” comes in the form of the proverbially beautiful, well-liked, and navel pierced female member of the in-crowd.

Enter Paris Morgan, nuanced nicely by Disney alum Christina Milian. As fate, or braggadocio would have it, Ms. Morgan and her posse of pals are out flossin’ (showing off her wealth) one day in her mother’s Cadillac Escalade when she gets into a fender-bender as a result of driving while talking on her cell phone to her boyfriend who has just been drafted to the National Basketball Association (NBA). Needless to say, she takes the SUV to be fixed at a garage where Alvin is building a car engine for the final leg of the engineering contest in which he currently holds third place. After much discussion between the two, Alvin and Paris hatch upon a plan, that must be kept on the downlow, but will be mutually beneficial: Paris will get her mother’s car secretly fixed by Alvin, and Alvin, in return, will get two-weeks worth of Paris’s friendship and a much-cherished upgrade to his loser reputation. Thus, the deal is made and the deception begins.

With Paris’s social seal of approval, Alvin is reluctantly accepted into the school’s elite circle of popular students, which simultaneously creates a rift between him and his former friends. It is amazing to witness just how quickly the popularity for which Alvin yearns deteriorates his decent character and his moral code of ethics. Of the film’s 100-minutes duration, about 15 to 20 minutes focuses on the honest and kind person Alvin really is. The majority of the movie, unfortunately, is dedicated to seeing him morph into the crass, cold-hearted, but ever so popular “Al,” his full name having been shortened to demonstrate his evolving coolness quotient.

In LOVE DON’T COST A THING, director Beyer shows viewers the vacuous standards by which a person is deemed popular. A standard according to which Zoe, one of Paris’s best friends, equates marriage to an NBA player as the very best life has to offer. With much chagrin, the audience also sees Walter, one of Alvin’s friends, who is hilariously played by Kenan Thompson, measuring his and his peers’ value by the ridiculously expensive name-brand clothing they wear to school.

Beyer and Swerdlick have tried to communicate a positive message, but through a Hollywood lens blurred with stereotypes. While the movie clearly shows that the motivating factor behind its popular students is their love of position/popularity, which is largely achieved with money, it comes nowhere near to revealing that the green grass upon which Alvin is firmly planted in the first 15 minutes of the film is also capable of producing a likeable person who loves himself, stays true to his friends, and adheres to a standard of moral ethics which in and of itself breeds admiration and just reward.

Some would argue that audiences better appreciate the good when they see the bad. View the movie, and you be the judge. Ultimately, LOVE DON’T COST A THING uses negative images to communicate some positive messages. For instance, it says be true to yourself, love yourself, and express yourself. Also, don’t sell yourself short to popularity, for its price and consequences are very costly. Finally, and perhaps best of all, its premise says that honesty really pays. These moral elements are seen, however, within a humanist worldview.

Since Hollywood isn’t shy when it comes to producing sequels, maybe, just maybe, they might give the green light for a part two where the audience gets to see more screen time given to the wholesome and loveable Alvin Johnson. If a sequel is made, MOVIEGUIDE® votes to skip the play on words and mirror the love of Jesus Christ by calling the sequel, LOVE COSTS EVERYTHING.

LOVE DON’T COST A THING also contains some graphic talk about condoms in scenes where Alvin’s father tries to relive his life as a “player” through his son. There is also plenty of foul language, though much of it is light. MOVIEGUIDE® therefore advises extreme caution.