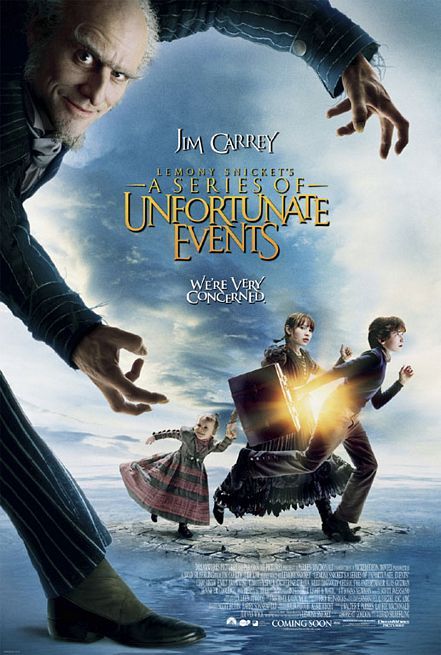 LEMONY SNICKET’S A SERIES OF UNFORTUNATE EVENTS is based on the first three books in a series of popular children's books. The story opens with the three Baudelaire children learning that their parents have died in a massive fire, which destroyed their home. Mr. Poe, the executor, first places them with their nearest relative, Count Olaf, played by Jim Carrey. The Count is an outrageously bad actor who makes it clear that he wants the Baudelaire fortune and is willing to kill to get it. The three children use their own personal talents to escape Count Olaf’s clutches, but he pursues them as they are placed with other distant relatives.

LEMONY SNICKET’S A SERIES OF UNFORTUNATE EVENTS is a stylish, funny movie for pre-teens and young teenagers. It has a lot to recommend it, including a moral coda at the end which says that children who can work together and love each other are "very fortunate indeed." The movie is very dark, however, much too scary for little children. It also doesn’t have enough light humor to completely carry off its sardonic, episodic tone. Furthermore, a few scenes are flat, despite the movie’s many visual delights.

LEMONY SNICKET’S A SERIES OF UNFORTUNATE EVENTS is a stylish, funny movie aimed at pre-teens and young teenagers. It has a lot to recommend it, including a moral coda at the end which says that children who work together to overcome adversity and love each other are “very fortunate indeed.”

The movie is very dark, however, much too scary for little children. It also doesn’t have enough light humor to completely carry off its sardonic tone.

The high concept of the books and the movie is that life is difficult and children need to be prepared to deal with it. Therefore, in a way, the movie resembles hazing, an intense confrontation with the unfortunate aspects of life.

The story opens with the three Baudelaire children learning that their parents have died in a massive fire destroying their home. Mr. Poe, the executor of their estate, places them with their nearest relative, Count Olaf. The Count is an outrageously bad actor who makes it clear that he wants the Baudelaire fortune and is willing to kill to get it.

The three children, 14-year-old Violet played by the beautiful Emily Browning, her 12-year-old brother Klaus and their baby sister Sunny, played by the best actresses in the movie, the Kara and Shelby Hoffman twins, quickly perceive Olaf’s evil intentions and work together to thwart his plans.

Violet is a brilliant inventor. Her inventiveness gets them out of many tight spots. Klaus is an avid reader who remembers everything he reads and often saves the day by remembering some piece of literary trivia, such as how to switch a train from one track to another. Although Sunny can only talk baby talk, she has a very quick, discerning grasp of character and very sharp teeth, both of which she uses to save the day when appropriate.

When Mr. Poe finally realizes Count Olaf’s wicked ways, he places the children with probably the most wonderful character in the movie, Uncle Monty, a herbatologist played by Billy Connolly. He lives in a reptile room with venomous cobras, vipers, rattlesnakes, pythons, scorpions, and other unattractive reptiles. In disguise, Olaf gets into the reptile room, and finishes off Monty.

Mr. Poe then places the children with their aunt, Josephine, played by Meryl Streep. Josephine is afraid of everything – avocadoes because the pit may get stuck in your throat, refrigerators because they may fall on you, doorknobs because they may explode. Meryl Streep, who is afraid of apples and got swept up in the alar scare, is perfect to play this role. Aunt Josephine’s husband was eaten by vicious leaches and her house is built precariously overlooking a cliff overlooking the lake where the leeches live. Olaf gets rid of Josephine and harasses the children anew.

After these dire adventures, the question arises, Will Olaf get the fortune and dispose of the Baudelaire children or will they use their natural talents to thrive as a family and thwart the evil Count?

Although this is a dark movie, it does not rely on magic and does show that children can overcome horrendous circumstances. Thus, it does make a positive point. It also shows we live in a sinful, fallen world, although that was not the intention of the writers or filmmakers, who strangely put in the comment several times that there is more good in the world than bad, even though the story suggests otherwise.

Some of the humor in the movie is very pointed and witty, but a few sections of the movie are flat, with Mr. Carrey over-acting as he sometimes is apt to do. These problems may have occurred because the filmmakers tried to unite three short books into one movie, creating an episodic quality.

Also, it must be noted that there are some intense moments for children, such as when Count Olaf slugs the 12-year-old boy. Some of the reporters at the screening remarked about this physical violence. Some of the movie’s other moments are truly hair-raising. This means that the movie is not for children younger than 10 years-old, although the filmmakers are suggesting it’s okay for 8-year-olds. However, children in the imaginative stage of cognitive development, ages 3-7, could be deeply troubled by the movie, and may have trouble reading the very quick subtitles. Furthermore, without the consistent intense humor of the books, the movie is very sad at several points, almost depressing.

That said, like POLAR EXPRESS, this is a beautifully filmed, clever movie. The sets, staging, lighting, and costumes are superb. The production quality is high, and everyone who loves eye candy will be dazzled.

LEMONY SNICKET’S A SERIES OF UNFORTUNATE EVENTS probably is a very good match for pre-adolescents. Whether it will pull in a large number of adults or not will determine whether it’s a hit.

Writer: Robert Gordon BASED ON THE BOOKS BY: Daniel Handler, aka Lemony Snicket???