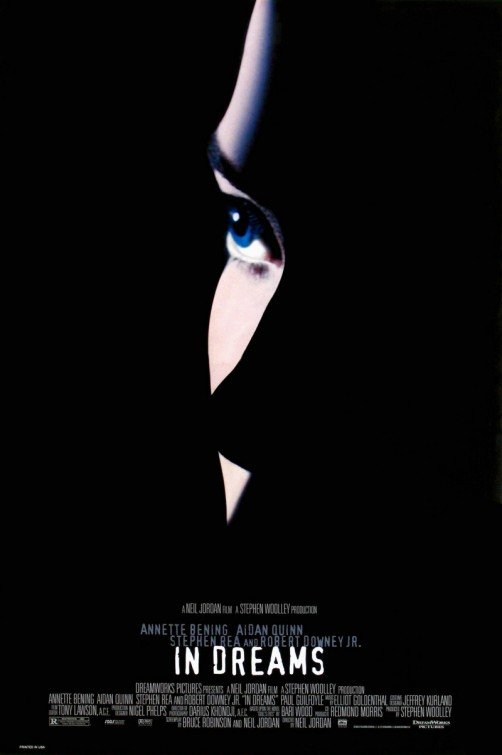 In the movie IN DREAMS, Annette Bening plays Claire, a clairvoyant. Claire realizes that someone is planting the dreams in her about future events such as the kidnapping and murder of her daughter and tries to convince her psychiatrist that psychic phenomenon exist. The occult activity is punctuated by intense, blood splattered violence.

The days have passed when thread-bare occultists gathered on the fringe of society to exchange their deluded stories and engage in their fruitless pursuits. Now, occultism is slickly packaged by Hollywood as something powerful, and perhaps even noble. No longer is it associated with the illicit and the sinful. Now we have PRACTICAL MAGIC and IN DREAMS (as well as CHARMED and SABRINA, THE TEENAGE WITCH on TV).

In the movie IN DREAMS, Annette Bening plays Claire, who needles to say is clairvoyant. The subtlety of her name marks the subtlety of the film, which lacks so much suspense that even the most sensitive to horror might find themselves yawning. Claire has these dreams about little girls being kidnapped. These dreams are connected to the town of Northfield, which was flooded to form a reservoir back in the 60s. Claire’s dreams foreshadow the future. Her husband Paul (Aidan Quinn), an airline pilot, is concerned about her dreams because it interferes with their conjugal life. After a twilight zone setup, Claire’s daughter Rebecca (Katie Sagona) is kidnapped and found and the bottom of the lake.

Claire’s dreams get more intense. She is put under psychiatric treatment, and then she is institutionalized after trying to take her own life. In the institution, she foresees Paul being eaten by a dog. She starts to realize that the person who seems to be planting the dreams in her is a man who was almost killed as a little boy, when Northfield was flooded. Evidently, this little boy’s mother chained him to the bed, but he escaped, only to be institutionalized himself and then to escape by dressing as a nurse. Now, he wants a family, plants dreams in Claire to get her to come to him and cross-dresses as his mother in a veiled reference to PSYCHO. Disaster leads to disaster, until Claire is able to take her revenge, or does she?

Neil Jordan is an art house director. THE CRYING GAME was one depressing surprise ( the girl turned out to be a man at the critical point of lust. IN DREAMS offers no surprises. In most horror movies, the characters are faced with a fearful situation where the normal order of reality is disrupted. For example, Dracula upsets the boundary between life and death because he is both alive and dead at the same time, and the Wolfman upsets the line between the Human and the Animal because he is a man who changes into a wolf. IN DREAMS steals the NIGHTMARE ON ELM STREET plot where dreams and nightmares enter the waking life of the heroes/victims and become real, but it handles this ripped-off horror plot in a mundane fashion. Thus, it seems that the only point of this movie is to convince the materialistic psychiatrist that psychic phenomenon does exist. This is done in a ho-hum manner, as if director Jordan assumed that his audience already believed in psychic phenomenon. Dionne Warwick may have been a better choice to direct this pathetic thriller.

The acting here is merely serviceable, complementing the mundane plot. Steven Rea has almost a bit part and looks as if he is the one who is drugged. Robert Downey, Jr. only enters in the third act as the demented Vivian Thompson. Aidan Quinn is given a very lackluster part as the husband who seems to be there only as a plot device, rather than a real character.

IN DREAMS should have been re-titled IN NIGHTMARES.