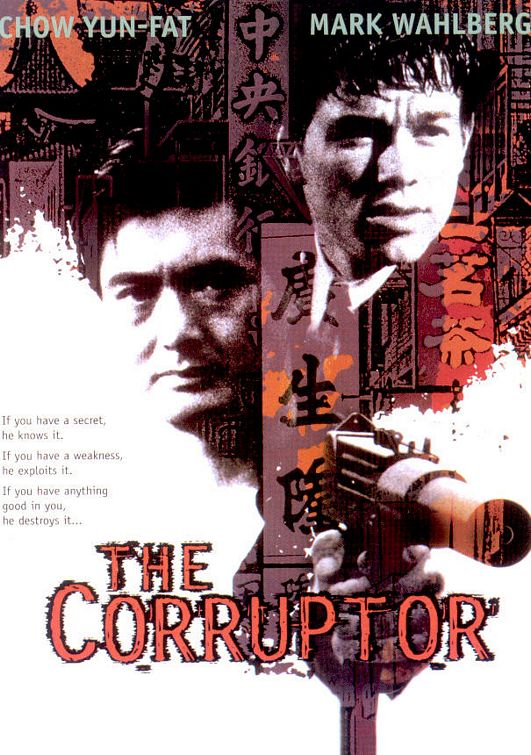 In THE CORRUPTOR, Chow Yun Fat plays Nick Chen, a legendary New York City police officer, and head of the Asian Gang Unit. He partners with Danny Wallace, where both face serious repercussions because of compromise. THE CORRUPTOR examines issues of loyalty, honor, courage, compromise, and redemption, but it is violent, has many obscenities and some strong sexuality as it explores that sin has wages.

A sometimes uneasy marriage between the Hong Kong style action movies of John Woo, (FACE OFF) and the gritty New York police films of Sidney Lumet (SERPICO & PRINCE OF THE CITY), THE CORRUPTOR is more ambitious than the average action flick, and a lot smarter, too – though some might view that as faint praise. This movie is the second attempt to make Hong Kong action star Chow Yun-Fat into an American star, and it is more successful than his first lame attempt, THE REPLACEMENT KILLERS.

In THE CORRUPTOR, Chow plays Nick Chen, a legendary New York City police officer and head of the Asian Gang Unit. Chen is battling a particularly vicious gang of young Chinese street thugs called the Fukanese Dragons. It becomes obvious, however, that, rather than merely enforcing the law, Chen is taking the side of the more traditional Triads against the nihilistic, bullet-spraying Dragons. He accepts bribes from the Triads, which are run by the Chinatown Godfather, “Uncle Benny” Wong (Kim Chan, who weirdly enough also played a similar character called “Uncle Benny” in LETHAL WEAPON IV), and Wong’s top lieutenant, Henry Lee, played by Ric Young.

As Chen collects his payoff, both in money and in the services of a young woman (Marie Matiko), he appears to be just another corrupt cop on the take. Enter the latest detective to be assigned to the AGU, Danny Wallace (Mark Wahlberg). At first, Chen is aghast at the bureaucratic bungling that would lead to a white officer being assigned to operate in Chinatown. “He’s worse than white, he’s green!” he sputters to his boss, but as the two begin to work cases together, Chen begins to respect his new young partner for his street smarts, idealism and integrity. When Henry Lee approaches Chen to recruit Danny, he not only resists, but makes a Faustian bargain with Lee to stay away from Danny.

However, the Devil doesn’t keep those kind of bargains, and Lee makes his own approaches to Danny. Lee offers to help Danny put bad guys behind bars – as long as they are Lee’s competitors. Danny takes this bait. After all, he is doing good by arresting criminals, right? Lee further insinuates himself into Danny’s life by protecting his drunken father (Brian Cox) from Mafia loan sharks trying to collect a gambling debt.

As the war between the Dragons and the Triads escalates, an undercover FBI agent is killed, possibly because of Chen’s involvement with Lee. Chen begins to see that the justifications for his actions were wrong. He resolves to set things straight and rescue Danny from Lee’s clutches.

At its best, THE CORRUPTOR examines issues of loyalty, honor, courage, compromise, and redemption. It clearly illustrates how doing the wrong thing for “right” reasons, and even doing the right things in the wrong way, can be a slippery slope that leads to corruption – or, worse, anarchy.

Ric Young plays Henry Lee as the ultimate human tempter, a man who can even use his target’s better instincts against him in an unguarded moment. He tries every trick in the book to ensnare his targets, and the audience can almost hear him whisper, “Turn these stones into bread, you are hungry, right?”

Chow Yun-Fat displays the unpredictable charisma and physical grace that made him the biggest star in Asia (next to the more family-friendly Jackie Chan) in films like A BETTER TOMORROW and THE KILLER. Wahlberg’s quieter, almost bookish performance makes him a good foil, and the two form the chemistry necessary to make the story and its dilemmas work.

Though it contains more than its share of obscene talk and bloody violence, THE CORRUPTOR does not revel in such things. They are presented in a realistic way as part of a depraved landscape. One set piece in particular is a textbook example of how such an approach can de-glamorize something that some might worry causes imitative behavior.

THE CORRUPTOR contains a car chase that is in a league with those in last year’s great action movie, RONIN. While a good car chase is thrilling, the chase in THE CORRUPTOR is truly terrifying. It demonstrates that if cops really chased bad guys through an urban area with guns blazing and without regard to traffic, fruit stands would not be the primary casualties, but carnage among innocent bystanders.

Regrettably, THE CORRUPTOR does not handle all of its objectionable elements this well. This is particularly true when it comes to sex. In one scene, it could be argued that Danny’s “undercover work” has led him into an impossible situation, and while the foreplay is somewhat explicit, there is a quick fadeout and no simulated sex acts. In another scene, however, Danny is presented a “present” of two prostitutes by Chen, and in this case, it is something a little quick thinking could have gotten him out of – if he so desired. Despite all this, another sexual situation clearly has some bad consequences for Danny.

Some of the action in THE CORRUPTOR is cartoonish, or over the top. While it never degenerates into the giggly sadism of the later LEATHAL WEAPON outings, it does detract from the intelligence and moral discussion of the rest of the film. Rookie screenwriter and New Yorker Robert Pucci may not have perfect pitch, but he hits more good notes than false ones here. The final shootout is particularly routine, though it does contain an act of self-sacrifice that brings the message home in a way that the makers of noir classics from the 1950s would appreciate. Ultimately, sin (and even compromise with sin) has wages in THE CORRUPTOR, but, regrettably, there is a sometimes brutal and gritty exposition of those sins.