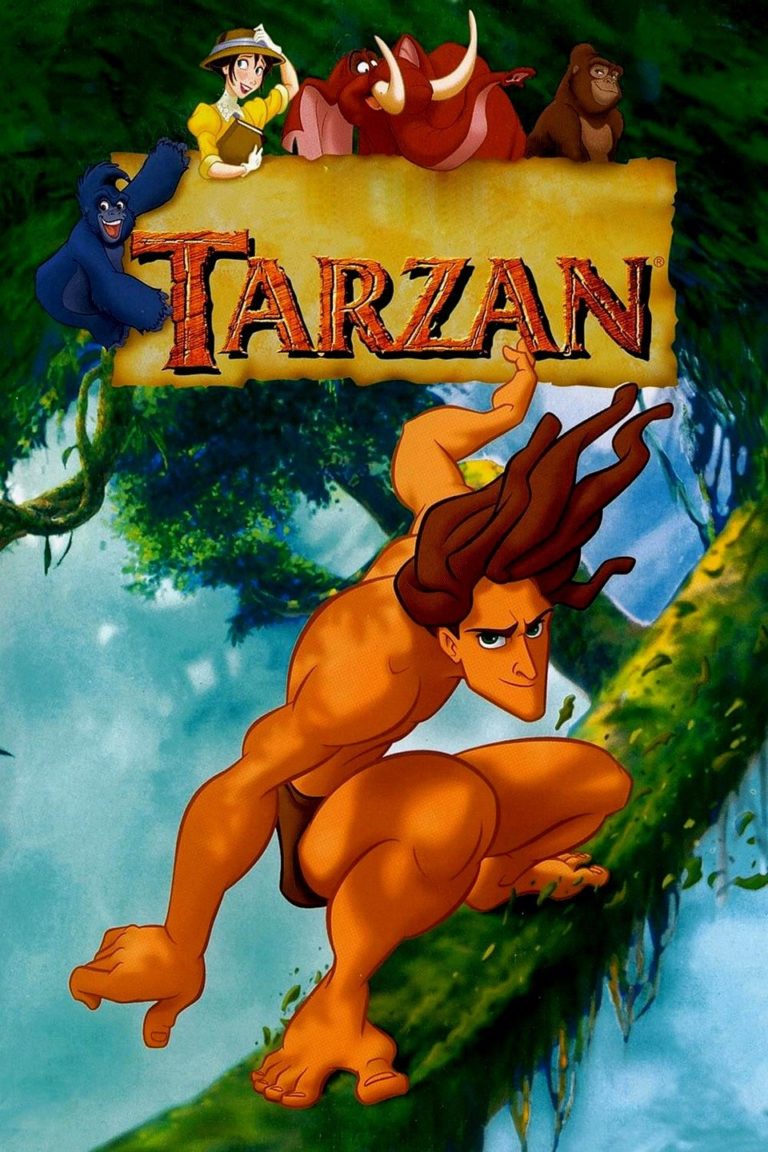 Walt Disney Pictures' TARZAN is the first animated feature to focus on the legendary jungle hero. Using a "deep canvas," 3-D effect where Tarzan swings, skids and flips through the jungle as the camera zooms in and around the landscape, this mostly moral story has some mild action violence and some political correctness which calls for parents to spend a media-wise moment with their children if they allow their children see it.

Mild moral worldview of taking care of family with a "going native" conclusion & mild pro-environmental political correctness implied with gun-happy, greedy English villain who wants to exploit gorillas; one use of the word "heck"; moderate action violence including implied leopard attacking & eating gorilla baby & human man & wife, Tarzan fights with leopard & implied stabs him to death, ship burns & sinks, implied death by accidental hanging in heat of battle, & man shoots at gorillas but misses; no sex but Jane seems a little excited at seeing Tarzan & being near him; man constantly in loincloth; villain drinks wine; no smoking; and, a little scatological humor where ape sniffs baby diaper & a joke about emotional constipation.

With 47 previous movie adaptations, “Tarzan” is believed to be the second most filmed subject in Hollywood history (following DRACULA). However, Walt Disney Pictures’ TARZAN is the first full-length animated feature to focus on the legendary loin-clothed jungle swinger. It uses an eye-popping technique called “deep canvas” which creates a 3-D effect where Tarzan swings, skids and flips through the foliage and vines of the jungle as the camera seems to zoom in and out and around the entire landscape.

The story begins with a catastrophic shipwreck that leaves a young couple and their infant son, Tarzan, stranded on the shores of a hostile jungle environment. A leopard named Sabor is on the hunt and first kills the infant son of a female gorilla named Kala (voiced by Glenn Close) and then attacks Tarzan’s parents. (Happily, the movie spares the audience from actually seeing the probable gruesome death of such an attack.) Reeling from her own loss, Kala sees Tarzan alone and adopts him into her own gorilla family. Her husband Kerchak (Lance Henriksen), the leader of the group, is not pleased, however.

As a five-year old, Tarzan doesn’t understand why he is different and can’t keep up with the other ape members. He proves his courage, though, by stealing a hair from an elephant’s tail. This act earns the respect of a spunky gorilla named Terk (Rosie O’Donnell), and a neurotic elephant named Tantor (funnyman Wayne Knight from TV’s SEINFELD and THIRD ROCK FROM THE SUN).

Tarzan matures into a skillful and athletic young man. He proves his loyalty and place in the gorilla family by finally destroying Sabor (where we, again, don’t see the kill), when Sabor returns to attack the gorilla family. Just as Kerchak begins to accept Tarzan, Tarzan hears a gunshot in the jungle. Man has arrived, including the benign primatologist named Professor Porter (Nigel Hawthorne), his beautiful daughter Jane (Minnie Driver) and their charming-but-arrogant personal guardian, Clayton (Brian Blessed).

Tarzan is drawn to Jane from afar and eventually saves her from a pack of agitated baboons. She teaches him English and about the outside world, while he teaches her about the jungle. All the while, Tarzan is dismissing appeals by Professor Porter and Clayton for Tarzan to take them to see the gorillas. As the time comes for the strangers to leave the jungle, Tarzan finds himself faced with the agonizing choice of staying with his gorilla family or returning to civilization. Tarzan learns the truth about his origins from Kala and decides to go. However, when Clayton reveals his true intentions of kidnapping Tarzan and members of Tarzan’s ape family, Tarzan breaks free with the help of Terk and Tantor and makes an attempt to save the only family he has ever known. Finally, Jane and her father must decide whether or not to go to “merry Old England” or stay in the jungle with their new friend.

Artistically, there is a lot to appreciate about this movie. As expected, the animation is superb. The audience will see Tarzan move through the jungle like no live actor could ever do. In fact, the Christian animator who brought Tarzan to life in this movie, Glen Keane, says his teenage son and his skateboard inspired him. Tarzan literally rides the trees like a surfer or a skateboarder, to the certain delight of young boys, who may want to rig ropes from trees after seeing this movie. Similarly, the music this time by British pop star, Phil Collins, provides the expected jungle beats and rhythm to pump up the excitement.

Thematically, this clearly recognizable Disney product borrows greatly from other, previous products. Thus, the audience sees the kind native, like POCAHONTAS, traverse his/her beloved forest home. Furthermore, the bad English come to destroy the peaceful way of life. (Granted, only one of the Englishmen proves to be villainous in TARZAN, but even so, he still sports the smarmy attitude and little pencil-thin moustache.) TARZAN is also a lot like THE LION KING with lots of talking, wise-cracking African critters scampering about, and a few characters harping on the integrity of the family structure. For comic effect, the Professor serves tea from a tea set looking exactly like the teapot and cups in BEAUTY AND THE BEAST.

Morally, TARZAN is a mixed bag and has a disappointing conclusion.

First of all, both the human families and the ape families constantly talk about family love, self-sacrifice and family protection. Yet, Tarzan’s ape mother Kala doesn’t tell him, until it is almost too late, that he came from humans. The Professor and his daughter are loving and respectful to the apes, but they also hold their English civilization dear and teach it to Tarzan. In a nod to Darwinism, however, when the Professor sees Tarzan, he says, “He could be the missing link.” The Professor also says he will introduce Tarzan to Darwin, Kipling and Queen Victoria. Furthermore, as mentioned before in reference to Disney’s POCAHONTAS, Clayton proves to be another greedy white Englishman who wishes to exploit a defenseless new land for personal gain. This perpetuates false, anti-Christian, Marxist stereotypes about Western Civilization.

Finally, the Professor and Jane decide to “go native” at the end of the movie. They don loincloths and swing through the trees, preferring the jungle to English civilization founded historically on the Christian worldview. This is a departure from the original book by Edgar Rice Burroughs book where Tarzan goes back to what director Chris Buck said was actually Baltimore. He told me in an interview after the screening that live action films had Tarzan going to civilization, but they wanted to do something different. They also thought it would be dramatically inconsistent for Tarzan to leave his jungle home after the whole time it was established that he loved his ape family there. Civilization has its problems, but there is perhaps an unintentional nod to “going native” and worshipping nature rather than living in a civilized area where man can express his God-given creativity. (Hopefully, in the direct to video sequel, Tarzan will go to civilization.)

Unlike some other recent Disney animated movies, TARZAN doesn’t have New Age religion, ancestral worship, talking trees, or revisionist history, but it does have a stereotypical villain and heroes who decide it is better to be a noble savage than a refined person of culture. There are many other TARZAN videos out available, some of them entirely inappropriate for children, but many of the older ones with Johnny Weismuller aren’t infected by modern political correctness. Disney’s new animated TARZAN, however, isn’t heavy-handed or preachy like the tale of the murderous, noble savage in INSTINCT, though it does have a few red flags. Parents can enjoy the movie with their children if they discuss it with them and perhaps even give them the original book to read too.

Writer: Tab Murphy BASED ON THE NOVEL BY: Edgar Rice Burroughs