ROSENCRANTZ AND GUILDENSTERN ARE DEAD 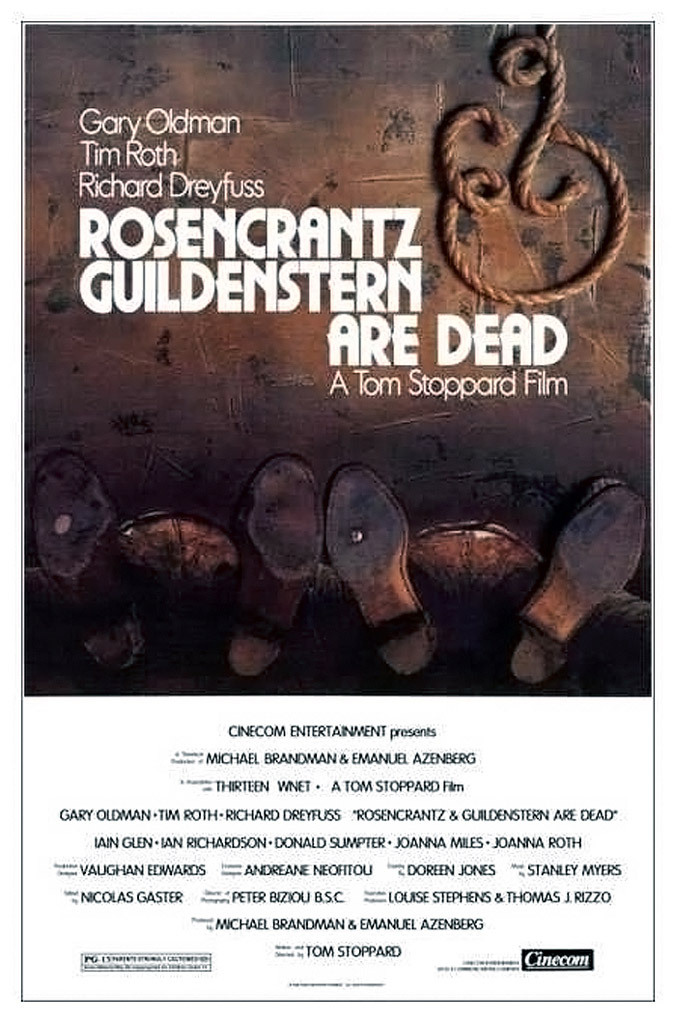 Two unlikely heroes steal the limelight from Prince Hamlet in this comedy about Rosencrantz and Guildenstern, two of the minor characters from Shakespeare's play

ROSENCRANTZ AND GUILDENSTERN ARE DEAD is a nihilistic comedy that takes place within the world’s most famous tragedy, “Hamlet,” and stars two of Shakespeare’s minor characters, Rosencrantz and Guildenstern. Old friends of Hamlet, they have been mysteriously summoned to the royal court of Denmark by the King and Queen. Their mission, as best they understand it, is to find out why Hamlet is acting so strange, but that’s about all they know.

Loping their way to Elsinore on donkeys, Rosencrantz and Guildenstern toss coins as a test of probability theory (eerily, heads always wins). Moreover, they inadvertently make many discoveries in physics and even “invent” the paper airplane. They also play a kind of word-tennis rather like an Abbott and Costello routine, a game of verbal one-upmanship on a badminton court. Great game-players and time-wasters these two.

A comic duo on par with Laurel and Hardy, Rosencrantz and Guildenstern arrive at Elsinore and roam about the castle in an agitated state, trying to figure out exactly what they’re doing there, what they’re supposed to say to their royal friend and how not to lose their heads in the process.

Inadvertently, they eavesdrop on various scenes from the tragedy of usurpation and revenge unfolding before their very eyes: the tragedy of Hamlet, his beloved Ophelia, his mother,, Gertrude, her new husband Claudius, and courtier, and master spy, Polonius. They haven’t the foggiest idea of what’s happening, but dutifully show up and speak their few lines when prodded by the chief player.

“There’s something they’re not telling us,” complains Rosencrantz, or is it Guildenstern? They themselves hardly know which is Rosencrantz, which Guildenstern. Why? Because it hardly matters, since in the vast, inscrutable drama of fatality we call life, the names of the individual players (that is, us) don’t add up to much.

Director/writer Stoppard puts it this way about man’s ability, or inability, to control his own fate. “This is a story about two guys who show up in a place, and they don’t know how they got there and they don’t even know what they’re doing there. Most of what they’re told isn’t true, and they end up dead. And there’s nothing in the Shakespeare play to indicate that they ever find out why they were killed. So whatever that does for you,” says Stoppard, “that’s what the movie is saying.”

Thank God that the Bible says something far different from Stoppard. In Matthew 10:29-31 Jesus says, “Are not two sparrows sold for a penny? Yet not one of them will fall to the ground apart from the will of your Father…. So don’t be afraid; you are worth more than many sparrows.”

Not only do we have worth in God’s sight, but through Christ we are united with Him to accomplish God’s purpose. In 1 Corinthians 12:12-31, the example of the body is given to illustrate that we are all members of the one body of Christ. In verse 18, the sovereign purpose of God is stressed in diversity of the parts of the body. Paul is illustrating the fact that God has arranged for Christians in the body of Christ to exercise different spiritual gifts, and this diversity is intended to accomplish God’s unified purpose.

In verse 21, there is the principle of the interdependence of the parts of the body in the one whole. Christians in the body of Christ are mutually dependent as they exercise their distinctive functions. Verse 22 says that Christians who seem to have less important functions in the body of Christ are actually indispensable, a point that Stoppard doesn’t take into consideration.

Finally, Romans 9:21 says: “Does not the potter have the right to make out of the same lump of clay some pottery for noble purposes and some for common use?” This analogy between God and the potter and between man and the pot should not be pressed to the extreme. The main point is the sovereign freedom of God in dealing with man, which seems to have gone unaddressed in ROSENCRANTZ AND GUILDENSTERN ARE DEAD.

Watch ROSENCRANTZ AND GUILDENSTERN ARE DEAD:

Director: Director/writer Stoppard puts it this way about man's ability, or inability, to control his own fate. "This is a story about two guys who show up in a place, they don't know how they got there, they don't even know what they're doing there. Most of what they're told isn't true, they end up dead. And there's nothing in the Shakespeare play to indicate that they ever find out why they were killed. So whatever that does for you, " says Stoppard, "that's what the movie is saying."