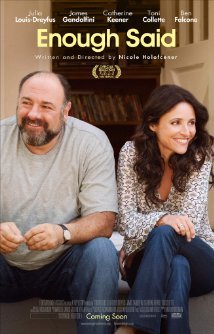 ENOUGH SAID is a problematic romantic comedy. The story follows Eva, a divorced mother of a teenage daughter who’s also a massage therapist. Eva meets Albert at a party. She finds herself drawn to his warmth and charm despite his being overweight and a slob. Soon, the two are falling in love. Meanwhile, Eva becomes friends with a new massage client who’s always complaining about her ex-husband without naming him. Of course, the ex-husband turns out to be Albert. However, Eva hides this new revelation so she can mine her friend for more gossip. This complicates everything horribly, leading to more plot twists.

ENOUGH SAID is a character comedy in the style of Woody Allen. It creates warm, funny situations for neurotic but lovable characters. However, it also has a Romantic, libertine attitude about sex, despite some light moral elements and a touching scene of forgiveness. ENOUGH SAID also has too much foul language. All in all, ENOUGH SAID has many funny lines and sharp performances that are entertaining and sometimes even insightful. However, the movie’s immoral elements make it excessive.

(RoRo, C, B, LLL, SS, N, A, MM) Strong Romantic worldview, with a redemptive scene of forgiveness and some light moral elements where consequences are suffered for gossiping and other bad behavior; at least 46 obscenities and profanities; light comic violence; strong sexual content includes frequent comic dialogue about sex includes two women discuss their sex lives and share notes on what turns out to be the same man, implied fornication with couple shown in bed, lead character (a divorced mom of a teenage daughter) tells her daughter’s teenage friend to go ahead and fornicate now so she can “get over it,” girl later says she had sex, and it was no big deal, and girl’s mother arrives to take her away from the lead character, but character laughs as woman leaves; upper male nudity and massage therapist shown working on men and women’s bare backs; casual alcohol use; no smoking or drugs; and, gossip and lying but eventually rebuked, including forgiveness asked and received.

ENOUGH SAID is an entertaining but problematic romantic comedy about a divorced massage therapist who finds herself falling in love with a divorced man without realizing he’s the ex-husband of her new best friend and client. ENOUGH SAID has a strong Romantic worldview with too much foul language and some lewd references.

The story follows Eva, a divorced mother of a teenage daughter who is also a massage therapist with apparently only one real friend. Eva meets Albert at a party and finds herself drawn to his warmth and charm despite his being overweight and a slob. Soon, the two are falling in love with each other, though the movie’s casual sexual attitudes tries to make it cute that they have sex on their second date together.

Meanwhile, Eva becomes friends with a new massage client named Marianne, who’s a famous poet and is always complaining about her ex-husband without naming him. Eva is fascinated by her comical horror stories until she slowly realizes that Albert has the exact same bad habits. Eva finally realizes Albert is Marianne’s ex-husband.

However, instead of owning up to her newfound knowledge with each of them, Eva hides that she’s figured this out and continues mining for gossip from Marianne about Albert because she feels it will prepare her to handle any bad qualities about him. Yet that very knowledge causes Eva to start nitpicking. This complicates everything horribly, leading to more plot twists.

ENOUGH SAID is a gentle character-based comedy in the vein of Woody Allen. Writer-director Nicole Holofcener matches Allen’s good and bad qualities. She creates warm and funny environments for lovable yet neurotic characters. The downside is that, like Woody, she has a casual attitude toward sex that renders her movie highly Romantic in tone and lacking conventional morality.

This manifests itself not only in the movie’s main romance, but also in the fact that the characters engage casually in great duplicity and gossip before learning a moral lesson against gossip and deceit, yet continuing to engage in a pre-marital affair. The movie also has a brief offensive scene where Eva tells her teenage daughter’s best friend to have sex and just “get it over with,” advice the girl says she followed later. Finally, ENOUGH SAID has too much foul language.

That aside, ENOUGH SAID handles its illicit subject matter with discretion during most of its running time. There are also strong negative, emotional consequences for Eva’s gossip and deceit, as well as a touching scene of forgiveness.

All in all, therefore, ENOUGH SAID has many funny lines and sharp performances that are entertaining and sometimes even insightful. However, the immoral elements in ENOUGH SAID make it excessive.

Enough said? If not, please consult our content section for more details about this movie.