"When Passion Turns into Obsession" 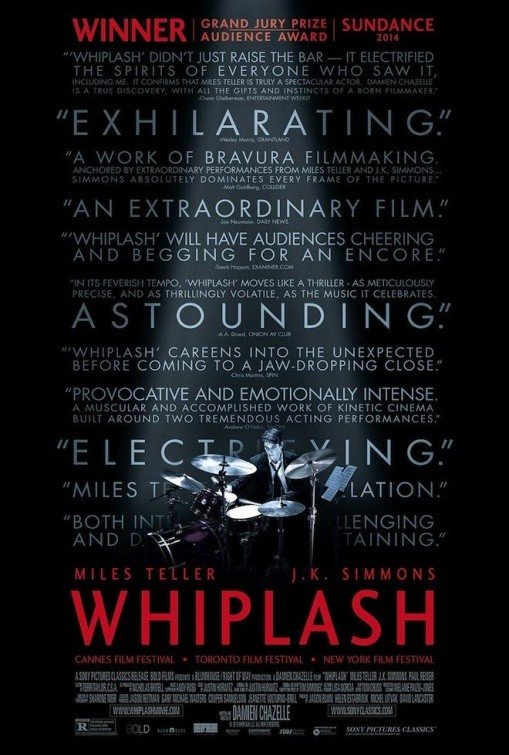 WHIPLASH is like a dramatic thriller about American jazz music. The story follows Andrew Neyman, a promising young drummer, who attends a prominent and rigorous music school. Andrew wants to take his music career to the top, but faces difficult challenges along the way. He meets a merciless jazz instructor who pushes Andrew’s musical abilities, driving him to the brink of insanity. Their troubled relationship is shot like a boxing match, including sweat and blood.

WHIPLASH has excellent writing, directing, cinematography, and acting. It will have viewers on the edge of their seats. Sadly, WHIPLASH has a strong humanist worldview with many strong obscenities and profanities. For example, the protagonist measures musical greatness and success on the proficiency of his drumming talents and on how great of an impression he leaves on his ruthless jazz instructor. His own ego grows whenever success occurs. This goes against the Bible’s concept of God-given talents and gifts, which are meant for the glory of God and to benefit others. WHIPLASH has a lot of violence and strong obscenities and profanities, so extreme caution is advised.

(HH, Ro, LLL, VV, A, M) Strong humanist worldview, with the protagonist trying to reach musical success and greatness with his musical abilities and talents alone, slightly supported by elements of Romanticism, with the protagonist allowing to be physically and verbally abused by his ruthless music instructor simply because he loves and is passionate about drumming, rather than realizing that the logical thing to do is to remove himself from that; at least 50 obscenities (including some “f” words) and 10 profanities (including GD and Jesus references), plus some name calling and slurs; moderate violence, with several scenes that involved blood after the protagonist plays drums for an extensive amount of time, including a scene where jazz instructor nearly decapitates the protagonist after throwing a drum cymbals and a scene involving a serious car accident; no sexual content; no nudity; very light, brief alcohol use, with a scene at a bar with people drinking; no smoking or drug use; and, very light miscellaneous immorality, with the music instructor seeking revenge on the protagonist for reporting his abusive methods of instruction, some lying and dysfunctional family portrayals include depiction of the father as a failure.

Despite being hounded by his father’s unsuccessful writing career, Andrew is steadfast in his quest to ascend to the top of the nation’s most prestigious music conservatory, and eventually become one of, if not the, greatest drummers. Terence Fletcher, a ruthless jazz instructor, who’s recognized for his teaching abilities and his frightening teaching methods, directs the top jazz band in the school. Fletcher discovers Andrew and transfers the aspiring jazz drummer into his music ensemble, forever changing Andrew’s life and musical career.

Andrew’s appetite to accomplish perfection rapidly spirals into obsession. His obsession prompts him to strip his life of anything that my hinder him from achieving greatness. He also allows his merciless jazz instructor to continue to push him to the brink of his ability and nearly to insanity.

WHIPLASH undoubtedly presents a traditional humanist worldview that places man as the measure of all things. This is primarily seen in the protagonist, Andrew Neyman, who obsessively believes and tries to reach greatness solely on the basis of his musical abilities and talents. In his quest to merit greatness, he selfishly ends a romantic courtship with a young woman in order to avoid any distractions.

WHIPLASH fails to put abilities and talents in perspective. It seems to encourage the use of personal talents for the purpose of attaining success and greatness, which will result in self-worth and glorification. This is ultimately observed in the epic 10-minute drum solo at the very end of the film. After miserably failing to captivate the audience, Andrew returns to give the greatest performance of his career, but only for the purpose of proving his worthiness to everyone, especially his merciless jazz instructor.

Although WHIPLASH fails to present a positive Christian/biblical worldview, and instead presents a humanist worldview, it nonetheless is aesthetically pleasing to watch. The high artistic value predominantly derives from the movie’s script, cinematography and acting.

The plot in WHIPLASH is fairly simple and easy to comprehend, but not to the point of complete predictability and disinterest. The psychological complexities of each character, especially of the protagonist, Andrew, and his crazy jazz instructor, Fletcher, give the story a much more powerful meaning and move the storyline forward. It was fascinating to see how WHIPLASH told the simple story of an abusive student-instructor relationship in music, since these kinds of stories are usually sports related, but it definitely was captivating.

The cinematography was also fantastic in WHIPLASH and added to the overall aesthetic worth. The movie contains several beautifully shot scenes of the protagonist playing the drums in slow motion with blood dripping on and running through on different parts of the drum set, especially on the cymbals and snare. This was intentionally done to capture the high degree of difficulty of drumming and a drummer’s commitment to mastering their art form. It was also fascinating to see how the abusive relationship between Andrew and Fletcher was creatively captured as a boxing rivalry and match. It definitely almost feels like one is watching a ROCKY movie or a movie about Mohammed Ali. Andrew and Fletcher go back and forth at each other. Fletcher yells obscenities at Andrew. In response, Andrew replies with a nice drum solo, all while there is blood and sweat. These “boxing” scenes really validated and enhanced the nastiness and dysfunction of the two characters’ relationship.

Finally, the acting is also outstanding and contributes to the overall artistic value of WHIPLASH. Most of the acting is between Miles Teller as Andrew and J.K. Simmons as Terence Fletcher, since the heart of the narrative is based on their relationship. All the other actors have relatively small supportive roles. Teller was the perfect actor for the lead role because he has a background history in drumming and music in general, so the movie reflects his musical skills. The best acting, however, comes from Simmons, who stole the show. His performance is so marvelous that the movie’s audience develops complete disdain toward his character by the movie’s end. Simmons probably will get some major nominations during awards season.

Overall, WHIPLASH is a thrilling, electrifying drama that is centered on a humanist worldview and contains violence and a heavy load of obscenities and profanities, so adult viewers are advised, but otherwise it’s a good a movie.