"Do Your Own Thing" 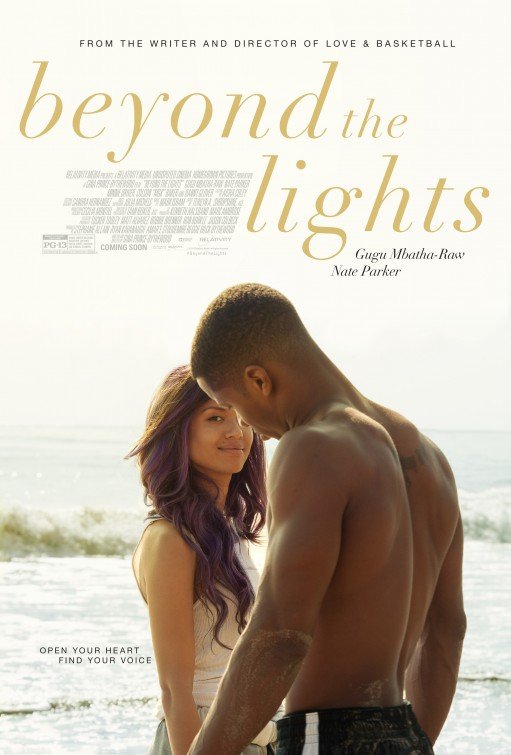 In BEYOND THE LIGHTS, Noni becomes a sexy rock star to please her demanding mother. Her lifestyle is so sickening she winds up on a balcony preparing to jump to her death. She’s rescued by Kaz, a police officer assigned to guard her bedroom door. Noni’s mother and manager work to cover up the suicide attempt while the tabloids work to uncover it. Kaz winds up playing along, but being truly concerned about Noni’s wellbeing. He and Noni develop a relationship that endangers the dreams their parents have for them. They escape to Mexico in search of their own identities.

BEYOND THE LIGHTS is reasonably entertaining with good production values. The problem is that it misses the greatest option of all: surrendering your life to God. BEYOND THE LIGHTS contains excessive vulgarity and really lewd behavior. The movie implies these things are wrong, but it still promotes a Romantic worldview of pursuing your own desires and dreams without God. “Just do your own thing” isn’t a good lesson for children, or anyone else. BEYOND THE LIGHTS is beyond the pale.

(RoRo, C, B, AcapAcap, LL, VV, SS, NN, AA, MMM) Strong Romantic worldview where mankind finds happiness pursuing one’s own desires without God, mitigated by some light redemptive elements of self-sacrifice, but the movie’s primary example was to sacrifice one’s honesty and integrity for someone else’s benefit, some moral elements include some police work that was noble, but even this included violence beyond the necessary, and horrible anti-capitalist representation of recording industry; at least 25 obscenities and one light “Oh, my God” profanity; strong violence includes man shoots policeman, policeman brutally beats man, stage performance with some violent looking fake sex results in a an actual fight, attempted suicide; strong sexual content includes sex outside of marriage shown and condoned on several occasions, musical “performances” that simulate sex, including oral sex and sexual violence, skimpy costumes, frequent crotch grabbing; upper male nudity and upper female nudity from behind; alcohol use with drunkenness; no smoking or drugs; and, dishonesty, manipulation, mother obsessed with daughter’s career encourages or ignores horrible behavior to advance that career.

BEYOND THE LIGHTS is the story of a girl who rises to rock stardom to please her mother, then tries to find what she wants in life. Her seedy rock lifestyle gives way to a seedy folk lifestyle, making the movie unsuitable for Christian audiences.

The movie opens with Noni as a little girl placing second in a talent concert. Her angered mother storms out and has her throw away her second place trophy. The movie then jumps forward to show Noni as a full-blown rock star gyrating on stage as if she’s not sure whether she’s a singer or a stripper. The lifestyle is so sickening she winds up on a balcony preparing to jump to her death. She’s rescued by Kaz, a police officer assigned to guard her bedroom door.

Her mother and her manager work to cover up the suicide attempt while the tabloids work to uncover it. Kaz winds up playing along with the cover-up but being truly concerned about the Noni’s wellbeing. Kaz’s father is pushing him into politics, but Kaz develops a relationship with Noni that damages the dreams their parents have for them. Noni and Kaz run away to Mexico to find their own identities. Will they be drawn back to a “better” life in America?

BEYOND THE LIGHTS is reasonably entertaining with good production values. The problem, however, is that the filmmakers completely miss the greatest option of all. Countless millions of people pursue their own dreams to wreck and ruin. Rejecting one’s parent’s wishes is not the key to happiness. Surrendering your life to God’s will is. Many people who achieve fame and fortune pursuing their own desires wind up being miserable. Those who pursue their own desires, and never reach them, are far from happy as well. God’s will is for you to use the talent and opportunity He gives you to bless others. You might be surprised just how fulfilling it is to be a blessing to others, especially when God empowers you to do more than you could on your own.

BEYOND THE LIGHTS has excessive vulgarity, sex and simulated stage sex in skimpy costumes. While the movie does imply this is wrong, the movie’s concept of what’s right is still wrong. It still promotes a Romantic worldview of pursuing your own desires and dreams without God. “Just do your own thing” isn’t a good lesson for children, or anyone else for that matter. BEYOND THE LIGHTS is beyond the pale. It isn’t a movie for media-wise viewers.