THE THEORY OF EVERYTHING

"The Theory of Everything Begins and Ends with Love" 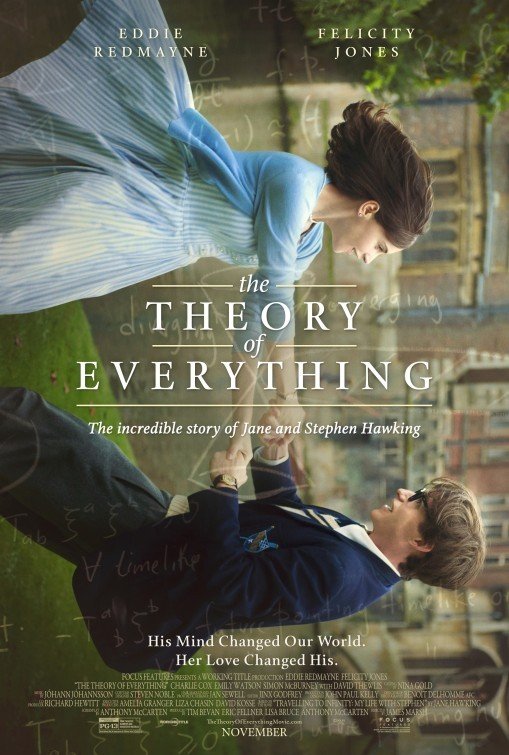 THE THEORY OF EVERYTHING follows the life of world-renowned physicist Stephen Hawking and his wife, Jane. It details how they overcome Stephen’s crippling muscle disease with love, humor, perseverance, and acceptance. As two doctoral students at Cambridge University, Stephen and Jane fall in love and even raise a family. However, Stephen becomes totally crippled by motor neuron disease. As his condition worsens, he continues to impact modern science.

THE THEORY OF EVERYTHING is a well-told love story with frequent comical moments. It’s both engaging and inspiring. The movie has strong atheist elements as Stephen holds to the theory that everything can be explained and proven by science. Thus, there is no need for God. In contrast to this, Stephen’s wife displays a strong Christian faith, though the ordeal of caring for both Stephen and their three children begins to take its toll. Still, she relentlessly shows Stephen the love of Christ as she cares for him when he can no longer care for himself. THE THEORY OF EVERYTHING shows both Stephen and Jane as positive role models. MOVIEGUIDE® advises extreme caution.

(HH, CC, BB, L, V, S, A, D, M) Strong atheist, humanist worldview where physicist protagonist develops theory to explain time and the universe apart from God, mitigated by strong Christian opposing worldview as wife cares for husband despite his crippling muscle disease so love and sacrifice are extolled even though things become hard for both her and husband; only one obscenity spoken, some adult themes shared with humor; man suffers from crippling disease and a tracheotomy is performed; adultery and female therapist lets patient look at porn magazine; no nudity; alcohol use; brief smoking; and, family becomes dysfunctional but they are reconciled somewhat.

THE THEORY OF EVERYTHING follows the life of world-renowned physicist Stephen Hawking (Eddie Redmayne) and his wife Jane Hawking (Felicity Jones).

During the beginning of the movie Stephen is an active, comedic 21-year-old doctoral student who attends Cambridge University studying cosmology, but has yet to declare a major. It would seem that he is either a late-bloomer, or just not taking his academic future completely seriously. However, his professor soon begins to see beyond Stephen’s quirkiness, to Stephen’s brilliant genius. Stephen questions the existence of God, theorizes about black holes, and that there is a time before time that can be scientifically and mathematically deduced.

Stephen meets Jane, also a student at Cambridge, and they fall in love. Their romance begins to blossom and Stephen begins to work on the mathematics to establish before time existed. They debate and discuss about God’s existence, being that Jane, unlike Stephen, believes strongly in God. They accept one another’s differences and continue to grow closer.

As Stephen works on hours of mathematical equations, his fingers begin to draw up, but he continues. His work seems to just be taking off when Stephen loses control of his legs and falls onto the pavement as he’s walking on campus and is knocked unconscious. His doctor diagnoses him with debilitating motor neuron disease (MND), which will in time cause him to lose all sense of control of his motor skills. His brain, however, will continue to function normally, but, eventually, he wouldn’t be able to communicate his thoughts. The doctor gives him two years to live.

Jane is determined to stay with Stephen against all odds. After two years, Stephen is still alive, and he and Jane even have a child. Eventually, he and Jane have three children together as he defies the doctor’s diagnosis. As his mobility becomes less and less, Stephen becomes confined to a wheelchair. He and his children find humor in the various wheelchair upgrades over the years as he continues to work on his theory about time. Stephen’s success grows. However, in time, caring for Stephen and three active children begins to take their toll on Jane.

Jane has begun to feel overwhelmed and a sense of losing herself when her mother encourages her to join the church choir to lift her spirits. When she does, she reconnects with her love of music and meets choir director Jonathan, who becomes her friend and a great help to her and Stephen. However, as the two realize they have feelings for each other, and after a near fatal situation with Stephen, Jonathan respects Jane’s commitment to Stephen, and he and she go their separate ways. Eventually, Stephen moves to America with his new therapist, leaving Jane behind.

THE THEORY OF EVERYTHING is a well-shot, well-told love story with comedic moments woven throughout to keep the movie engaging as well as inspiring. There is a very strong positivistic scientism worldview in the movie as Stephen holds to the theory that everything in existence can be explained and proven by science. Thus, there isn’t a need for God. For the most part, Stephen seems to be atheistic in his belief of God, and he reasons that the beginning of the universe can be explained through science without God. However, there is a moment where he does acknowledge God’s existence, or the possibility of God’s existence. This is one of the underlying tensions within Stephen and Jane’s marriage as Jane was brought up as a devout Christian follower of God. Eventually, this tension plays out and after their years together in love, laughter, trials, and triumphs, Stephen and Jane separate.

Much can be said about the brilliance of Stephen Hawking’s mind and how he has survived so many years with MND. Spiritually speaking, could it be that God is giving Stephen time? Time to come to know Him and that, beyond all Stephen’s theories, God is profoundly the Great I Am.

THE THEORY OF EVERYTHING eloquently tells a story of unconditional love and humor between Jane and Stephen through pain, perseverance and sacrifice. In this case, the saying rings true that, “Behind every great man there’s a great woman.” As Stephen is knighted in England, he invites Jane and the children to meet the Queen of England, realizing that he couldn’t have done it without Jane’s unflinching servitude and love. That said, extreme caution is advised for the romantic view of atheism.

Watch THE THEORY OF EVERYTHING: