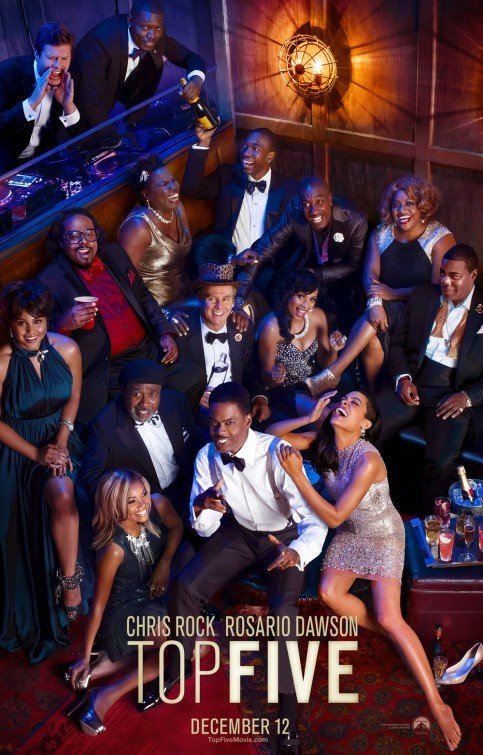 TOP FIVE is about a standup comedian who wants to be regarded as a serious artist. Comedian Chris Rock writes, directs and stars as the comic, Andre Allen. After too many sequels, Andre has an epic weekend planned to get himself back on top. His latest movie, UPRIZE, where he plays the leader of a historic Haitian slave rebellion, is opening. He’s also slated to marry his longtime girlfriend (a reality star in a “Real Housewives” series) live on the Bravo TV network. Andre agrees to be shadowed for a day by a female reporter from the New York Times. The reporter happens to be an AA member, just like Andre.

This strong plot setup in TOP FIVE allows Chris Rock to satirically and dramatically explore the world of standup comedy and the temptation to sell out for success. Consequently, the movie is able to make some moral points. Sadly, these positive results are greatly diminished by abundant and strong foul, crude language and excessively offensive lewd scenes. So, the positive qualities don’t balance out, much less overcome, TOP FIVE’s overwhelming negatives.

(PaPaPa, BB, C, HoHo, PC, LLL, V, SSS, NN, AA, DD, MMM) Very strong, slightly mixed pagan worldview with some moral/redemptive elements (including honesty and family eventually extolled, the dangers of addiction are mentioned, characters recognize their need to stop some immoral/negative behavior, and staying loyal to family and friends is lifted up), but some strong, crude homosexual references and some politically correct content; at least 220 or more obscenities and profanities, including many “f” words and some strong profanities (mostly GD), plus some racial epithets; some comical violence; extreme sexual content includes two graphic scenes leaving little to the imagination (including depicted prostitution and depicted nude dancing at a club), disgusting homosexual references, very crude verbal descriptions and references, and implied heterosexual petting in a scene set in a bathroom; images of upper and rear female nudity, and upper and rear male nudity; alcohol use and abuse, but characters go to AA; drug references, but recovery from addiction is extolled; and, very strong miscellaneous immorality includes lighthearted discussion and implied advocacy of highly raunchy behavior, male protagonist and his bride-to-be each shown as being false in their relationships, female reporter asks not to be judged for having had numerous male relationships and a couple relationships with other women, other characters comically insult each other rudely, and a surprise twist reveals reporter has lied about herself in a very serious way.

TOP FIVE is the story of a standup comedian who wants to be regarded as a serious artist, and a day in his life in which he is followed around by a New York Times reporter while his new movie comes out, and he’s scheduled to have a TV wedding. It has a strong, slightly mixed pagan worldview with two graphic sex scenes and plenty of foul, crude language. There’s also a secretly homosexual character revealed (though in a negative fashion), giving the movie some obscene homosexual elements as well. It is also mildly politically correct during some satire about the tendency of many movie-star comedians to want to make movies with serious political agendas.

The movie is written and directed by Chris Rock, who also stars as Andre Allen, a comedian who grew tired of Hollywood’s star-making machinery after one too many sequels in the fictional film series “Hammy the Bear,” about a giant talking bear who’s also a cop. Determined to prove himself as an artist, Andre has opted to only act in serious roles and to completely abandon his standup career. This leads to a string of flops that has his career on the ropes.

Andre has an epic weekend planned to get himself back on top, however. His latest movie, UPRIZE, where he plays the real-life leader of a historic Haitian slave rebellion, is opening. He’s also slated to marry his longtime girlfriend, who is a reality star in one of the “Real Housewives” series, live on the Bravo TV network.

That’s when an attractive and initially combative New York Times reporter (Rosario Dawson) forces her way into his life, seeking to spend a day with him for a slice-of-life profile in the newspaper. Her timing upsets Andre, because all the pressure is tempting him to start drinking alcohol again after four years of sobriety. However, when she reveals herself to be a fellow member of Alcoholics Anonymous, the two make a pact to speak to each other with the AA program’s hallmark “rigorous honesty” over the course of the highly tumultuous day.

This setup is a sharp one for “Top Five,” as Rock uses the movie to satirically explore the world of standup comedy and the temptation to sell out for Hollywood success. On an artistic level, his sharply written screenplay and confident, fluid direction propel the story toward some surprisingly strong results as well as some laughs.

Rock shows the difficult balance many black entertainers have to maintain between mainstream success and the pressure to maintain ties with their often impoverished backgrounds. He also masterfully conveys the wild range of emotions that standup comics go through, from nervous fear to manic elation as they feed off the love and energy of strangers for their sense of self-worth. A scene where he’s transformed by the adulation of a comedy club crowd is particularly impressive.

Rock also does it all while generously constructing substantial supporting roles for his impressive cast of supporting players. Dawson digs deeper than her beautiful surface looks and provides a full-bodied performance that matches Rock with intelligence, wit and dark emotions.

Sadly, these elements detract severely from a sharp, emotionally affecting core storyline where honesty is valued and addiction is shown to be a serious problem that can nonetheless be overcome. These positive qualities don’t balance out, much less overcome, TOP FIVE’s overwhelming negatives.