A MOST VIOLENT YEAR

"Trying To Do the Right Thing Without Compromising" 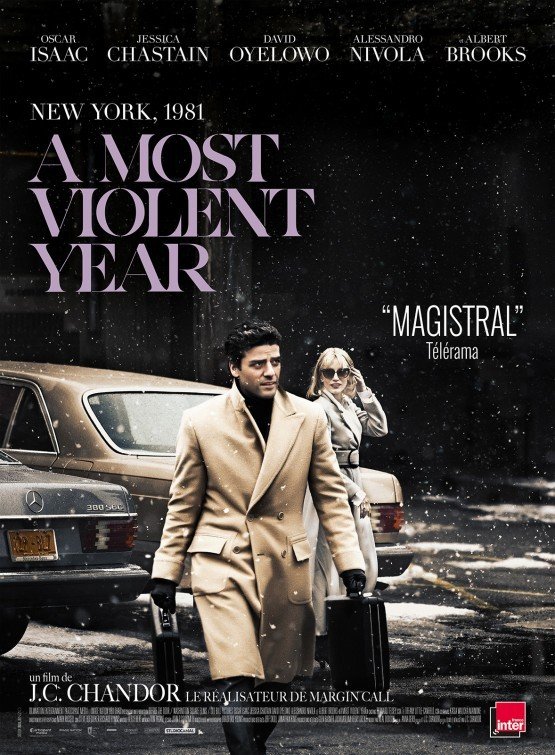 Set in 1981, A MOST VIOLENT YEAR is a riveting drama about a moral businessman in New York City with a growing oil heating company whose trucks are being hijacked. Abel Morales, a Latin American immigrant, bought the company from his wife’s mobster father. Abel is adamant about running his company as a legitimate business, with hard work and intelligence. The hijackers, and a local Assistant DA who doesn’t believe Abel is legit, endanger a crucial business deal that will put Abel’s company on top. Will Abel resort to immoral means to save the deal?

A MOST VIOLENT YEAR is one of the year’s best, most compelling movies. MOVIEGUIDE® Award winning actor Oscar Isaac of THE NATIVITY STORY delivers a brilliant performance as a smart businessman trying to do the right thing. The rest of the cast is excellent, including Jessica Chastain as the businessman’s ethically challenged wife. A MOST VIOLENT YEAR shows that hard work and doing the right thing can breed success. Extreme caution is advised for strong foul language and a borderline scene of sudden violence with bloody effects.

(BB, FR, LLL, VVV, N, A, MM) Strong moral worldview, with one or two antinomian, lawless moral elements condoned or almost condoned, marred also by foul language; about 44 obscenities (including many “f” words), six strong profanities and one light exclamatory profanity; one brief example of extreme sudden violence with blood when man’s shot in head and some strong violence when truck driver shoots it out with would-be hijackers, hijackers beat up driver and dump him out on road and send him to the hospital, salesman gets beaten up, and protagonist in car chases hijackers until truck crashes and chases hijacker on foot and through subway until he catches up with him and tries to punch a confession out of him but stops when it’s clear the man’s not telling him anything; no sex scenes (man and wife kiss a few times, once passionately); brief upper male nudity, some female cleavage; alcohol use; smoking; and, men hijack oil trucks, man admits buying hijacked oil but agrees to pay victim for what was stolen, scared employee disobeys company order, wife wants protagonist to compromise his values but he refuses multiple times, and character admits to embezzling and lying about it.

A MOST VIOLENT YEAR is one of the best-made movies of the year. It’s a thoroughly riveting drama about a moral businessman in New York City caught in a corrupt oil heating industry. He faces some moral and financial dilemmas when gangsters start hijacking his trucks and endanger a crucial business deal.

Set in 1981, the movie opens with a truck filled with heating oil being hijacked on the freeway at a toll stop. The two hijackers beat up the truck’s driver and leave him on the pavement.

Cut to a business meeting at an oceanfront oil tank storage facility across from Manhattan. A man with a fancy camelhair coat and his lawyer meet with the owners of the facility, who just happen to be Hasidic Jews. Abel Morales, a Latin American immigrant, puts down a deposit on the facility, but has only 30 days to come up with another $2 million. However, it’s Abel’s truck that was hijacked in the first scene, and it’s not the only one that’s been hijacked recently.

Abel purchased the heating oil company from his wife, Anna’s, gangster father, but he desperately and firmly wants to build the business legitimately. The attempt to buy the oceanfront storage facility is the next step in the company’s growth. The hijackings of Abel’s trucks might be done by Abel’s mobster competitors, including Anna’s gangster brother. Even if they aren’t behind the hijackers, one or more of these competitors is buying the hijacked oil from the crooks.

One night, a man with a gun is seen casing Abel and Anna’s new home, endangering their two young daughters. They think the gunman might be connected to the hijackings. Anna urges Abel to ask for help from her brother, but Abel is adamant. He doesn’t want to use criminal means, much less violence, to succeed, even to protect his family. In fact, he even refuses the local Teamster’s union official’s offer to get guns for his truck drivers. That will only escalate the violence, Abel says. Besides, he doesn’t want to endanger his upcoming loan from a bank to pay for the storage facility.

Why can’t the police help Abel with his hijacking problem?

An Assistant District Attorney tells Abel that the police are too busy dealing with the city’s rampant murder, rape and mugging rates. Not only that. The man also tells Abel that he’s investigating Abel’s company on multiple charges of fraud. Sure enough, the DA decides to make those charges, but Abel tells him he’s fighting the charges because he’s done nothing wrong, other than using some hard sales tactics in getting people to buy his company’s heating oil, which isn’t a crime. As Abel tells three new salespeople, he believes his company is the best one out there, even though its prices might be a little higher than the other guy’s.

Abel also cares about his truck drivers. He tells his hijacked driver not to worry about taking care of his family while he recovers from his injuries.

More trouble is brewing for Abel and Anna, however. When the hijacked driver is ready to return to work, Abel gives the man a stirring pep talk, but, unknown to Abel, the man is packing a gun. Sure enough, on the man’s first trip, two hijackers try to take the truck, but the driver fires back at them. He then runs away and goes into hiding, with the police searching for him.

Abel promises the Assistant DA he will do all he can to find and convince the driver to surrender. Abel tells the DA and his wife there are only two ways to do things – the right way or the wrong way. Abel is always trying to do the “most right” thing. However, the damage is already done, and the bank now refuses to give Abel the loan to buy the storage facility.

Abel’s dreams of success and achieving the American Dream are now on the verge of total collapse. How will he get the $2 million to buy the storage facility? Will he resort to illegal means, or even violence, to protect his family and the future of his company? Will he decide to cut a deal with his gangster brother-in-law or one of the other corrupt companies run by mobsters?

A MOST VIOLENT YEAR is a riveting movie from beginning to end. The cast is amazing, especially MOVIEGUIDE® Award winning actor Oscar Isaac (THE NATIVITY STORY) as the slightly vain and materialistic capitalist hero with a strong moral conscience.

Despite some harsh foul language, A MOST VIOLENT YEAR has a strong moral, capitalist worldview. Hard work and the American Dream are extolled, even though the movie clearly shows that corruption and violence can tarnish that Dream. Besides the foul language, there’s only one point toward the end where the movie seems to stumble morally, when Abel does resort to doing the “most right” thing instead of the perfectly right thing. Otherwise, however, this businessman is a really positive role model who exists in a gritty, corrupt world. He’s tempted to get really violent or to compromise with the corrupt industry around him that’s run by mobsters and thieves, but time and time again he refuses to cross those lines even when the wife he loves, who’s more pragmatic and morally flawed, tries to push him in that direction.

Ultimately, A MOST VIOLENT YEAR truly earns its kudos from the National Board of Review, which named it the year’s best movie. Sadly, extreme caution is advised for about 50 strong obscenities and profanities. There’s also a scene of sudden shocking violence with bloody effects. Otherwise, the movie is about as close to perfect as you can get for such a modern drama.

Watch A MOST VIOLENT YEAR: