"Risking Everything Is the Only Way To Live" 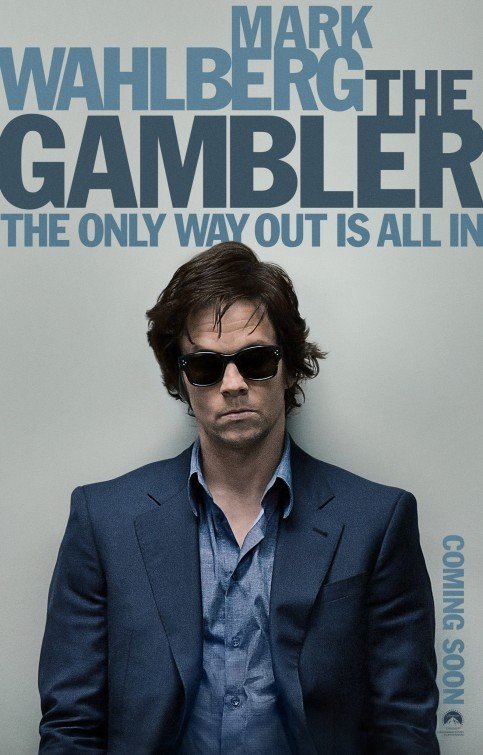 THE GAMBLER is a compelling remake of a 1974 movie starring James Caan. Here, Mark Wahlberg plays Associate English Professor James Bennett, an iconoclastic teacher who owes $260,000 in gambling debts to an illegal casino owner and a gangster. James gets money from his wealthy mother to pay off the debts, but he promptly loses it at an Indian casino. The gangster finds out one of James’ students is a star basketball player, so he forces James to offer the player some money to shave points off a game. James, however, has a better plan, but he ups the ante by borrowing more money on one final play.

THE GAMBLER is smartly directed, with nice camerawork, acting and terrific sound terrific sound that adds tremendously to this movie’s dark and intense mood. That said, THE GAMBLER has about 100 or more “f” bombs. There’s also a brief scene set in a strip club. And, of course, the story involves a lot of gambling. Eventually, more gambling resolves the plot problem. So, media-wise viewers ultimately will find THE GAMBLER to be unacceptable entertainment.

(PaPaPa, Cap, LLL, VV, S, NN, A, D, MMM) Very strong pagan worldview set in a film noir world of gamblers, loan sharks, gangsters, and illegal casino owners, with the movie’s plot problem involving gambling debts resolved by more gambling, and a menacing loan shark gives a gambling addict some sound capitalist advice about buying some nice real estate and saving your money instead of wasting it; at least 132 obscenities (mostly “f” words) and five strong profanities; strong violence includes protagonist tied up on a chair and roughed up a little by one gangster’s henchman, another gangster’s henchmen beat him up pretty bad, but protagonist also taunts them, gangster’s henchman dumps protagonist into bathtub water, plus threats of violence and murder; no depicted sex scenes but protagonist visits a strip club and hands a stripper some money and starts a romance with one of his female students; brief upper and rear female nudity in strip club scene, and two scenes of upper male nudity; alcohol use; smoking; and, frequent gambling (including playing a couple roulette wheels and playing Blackjack), loan sharking, illegal casino, and a gambling dive, dysfunctional mother and son relationship (partly due to son’s gambling addiction, but son has some kind of unmentioned resentment or grudge toward his mother), protagonist deliberately risks his own life to get back at gangsters and a loan shark or die trying.

THE GAMBLER is a remake of the 1974 movie starring James Caan about an associate professor of English with a gambling addiction who must find a way to pay off two gangsters, or else. The movie is smartly directed, with nice camerawork, acting and terrific sound that adds tremendously to this movie’s dark and intense mood. It has constant abundant foul language, however, and solves the plot problem for the protagonist with more gambling.

Mark Wahlberg stars as Associate English Professor James Bennett, who wrote a novel with middling success. After his elderly grandfather’s death, the movie shows James going into an illegal gambling establishment operating in a mansion in the Malibu Hills high above the Pacific Ocean. Though he owes the casino’s Asian owner, Mister Lee, $240,000, James promptly loses the $10,000 he brought with him, then borrows $50,000 from a black gangster, Neville, who’s apparently roaming the illegal casino looking for gamblers to stake. He gives Mister Lee $40,000 of the $50K, but gambles away the rest. Now, James still owes about $260,000 to Lee and Neville, and only has seven days to pay off the two debts.

Back at college, James tells his literature students that writing for a living is useless unless you are a true genius who’s willing to take big risks. Don’t strive for mediocrity, he advises. He tells the class that only one student, a pretty young blonde woman named Amy Phillips, qualifies as a writing genius, but he chastises her for not taking great risks. While James lectures, the star basketball player in his class, a young man named Lamar Allen, is too busy playing with his cell-phone to pay much attention. The college is putting pressure on James to help focus Lamar on passing the class so he can keep playing basketball.

After some threats from Mister Lee and Neville, James gets the money to pay off his debts from his wealthy mother, who’s not very happy with her son. However, he goes with Amy to a legal casino in Palm Springs, where he loses all the money at blackjack. After this happens, Neville threatens both Amy and his mother if James doesn’t come up with the money.

James goes to see a menacing loan shark named Frank, played by John Goodman. Frank lectures James about taking too many risks. He tells James that, if he gives him the money to pay off his gambling debts, Frank will show no mercy at all when James can’t make his weekly interest payments. Wisely, James decides not to borrow Frank’s money.

Neville finds out that Lamar Allen attends James’ class. He proposes that, to pay off his debt, James will get Lamar to win the next game by only seven points, but James has a better idea. His idea wins him the money to pay off Mister Lee, but James decides to borrow more money from both Frank and Mister Lee in a gutsy play to risk everything. The collateral for the loans will be his own life.

Rupert Wyatt, who directed RISE OF THE PLANET OF THE APES, the first movie in the recent reboot of that franchise, is a talented filmmaker. He does a bang-up job here, getting Mark Wahlberg to give one of his best performances, and doing the same with John Goodman, who plays the loan shark, and Jessica Lange, who plays the mother. The new script is based on James Toback’s acclaimed screenplay for the 1974 movie THE GAMBLER, starring James Caan of THE GODFATHER, ELF and CLOUDY WITH A CHANCE OF MEATBALLS. The sound design in this GAMBLER is particularly powerful. It gives more gravitas to the actors’ voices, especially in the scenes between Wahlberg and Goodman and between Wahlberg and Michael Kenneth Williams (from HBO’s BOARDWALK EMPIRE), who plays Neville.

That said, THE GAMBLER has about 100 or more “f” bombs. There’s also a brief scene set in a strip club. Of course, the story involves a lot of gambling. Eventually, more gambling resolves the plot problem, and the protagonist believes that risking everything is the only way to live. Hence, the movie’s tagline, “The only way out is all in.” So, ultimately, media-wise viewers will find THE GAMBLER to be unacceptable entertainment.