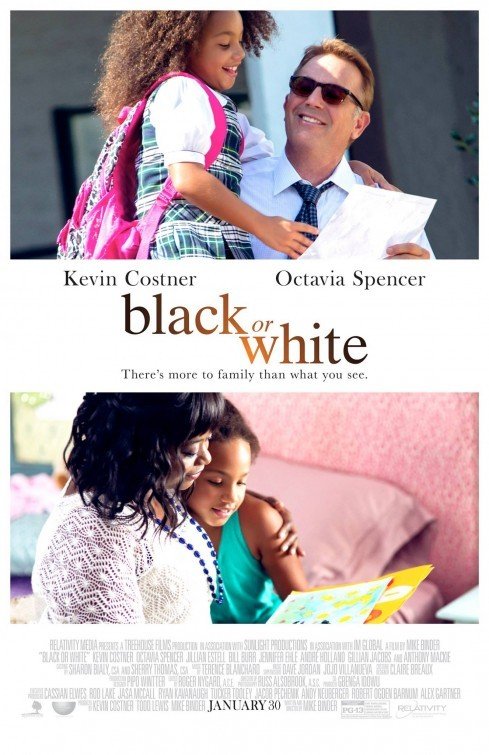 BLACK OR WHITE is a compelling, powerful drama about racial and family tensions. Kevin Costner plays Elliot, a rich lawyer whose wife just died in a tragic car accident. Therefore, Elliot is left as the caretaker of their 7-year-old mixed race granddaughter, Eloise, whose mother died at childbirth. However, the deaths of his wife and daughter have led Elliot to drink too much, especially after his wife’s death. Eloise’s paternal grandmother, Roweena, and her brother, a lawyer, decide to sue Elliot for full custody of Eloise. This fuels Elliot’s resentment toward Roweena and her troubled son, Eloise’s father.

BLACK OR WHITE isn’t a perfect movie. For instance, there is some strong foul language, and a couple scenes could be a little more believable and less pat. That said, it’s a captivating, touching movie with excellent performances by practically all concerned. Best of all, it has a strong moral worldview extolling repentance, reconciliation, overcoming racial divisions, and being a good parent. However, BLACK OR WHITE has plenty of strong foul language, some tense situations and references to substance abuse. So, strong caution is advised.

(BB, C, LLL, VV, N, AA, DD, M) Strong moral worldview about racial and personal tensions between black and white people who are related to one another by the birth of a mixed-race daughter and granddaughter, with some redemptive elements centering on genuine repentance; about 34 obscenities (including one or possibly two “f” words, eight strong profanities (six or so GDs and a couple references to Jesus) and one light profanity; some intense violence when two men struggle and one man hits other man in head with a small object, plus man almost drowns; no sexual content; upper male nudity and people in swimsuits during pool scenes, but nothing salacious; alcohol use, abuse and drunkenness by protagonist but he finally realizes his drinking problem and tries to correct it; smoking and references to man’s drug problem (including scene where he appears to be smoking something, perhaps some crack) but man realizes he has a problem though before the resolution he seems to keep failing while trying to recover; and, racial animosity but by the end the characters come to a resolution where they genuinely want to get along better, the “n” word is used a few times in an intense argument and a courtroom debate in ways however that don’t condone its use and in fact reject it, man imagines seeing his dead wife from a couple past memories and an intense near death experience, and father with drug problems breaks a promise to his daughter and her grandfather, but he comes to his senses.

BLACK OR WHITE is a compelling, powerful drama about a white grandfather trying to keep custody of his mixed-race granddaughter after his wife suddenly dies in a car accident, a tragedy that leads to a drinking problem on the grandfather’s part. Set in Los Angeles, BLACK OR WHITE is a moral exploration of the pros and cons concerning this situation. It also offers an insightful exploration of tensions between white and black communities in America today. It does have plenty of strong foul language and some tense situations, however, so strong caution is required.

The movie opens with the grandfather, Elliott, sitting in the hospital waiting room as he gets news that the car accident has killed his beloved wife. A rich lawyer, Elliott goes home to drown his sorrows and try to get the courage to tell his mixed-race granddaughter, Eloise, about her grandmother’s death. All her life, Eloise has been raised by her white grandparents because their daughter died in childbirth and her black father is a ne’er do well with drug problems.

A couple days later, Elliott tells Eloise what happened in an emotional scene. Then, her paternal grandmother, Roweena, decides to sue Elliott for full custody of Eloise. A determined woman who owns several business that employ other relatives, Roweena is helped by her brother, who’s a successful lawyer just like Elliott.

However, Elliot is still extremely angry at Roweena’s son, Reggie, not only for abandoning Eloise but also for convincing his daughter to hide her pregnancy from him and his wife. Apparently, the daughter had a heart condition that caused her death while giving birth to Eloise. Elliot thinks, if he and his wife had known ahead of time about the pregnancy, their daughter would still be alive. Meanwhile, Roweena is too close to her son to see that Reggie is too wracked by guilt and addiction to change for the good. She keeps making excuses for his behavior, even when he fails to show up for dinner at Elliot’s house to see Eloise.

BLACK OR WHITE is not a perfect movie. For instance, there is some strong foul language and a couple scenes (including brief parts of the acting) could be a little more believable and less pat. That said, it’s a captivating, touching movie with excellent performances by practically all concerned. All the characters have their flaws. The movie isn’t afraid to show the chinks in the armor of all its characters, black or white. Is Elliot a bit uncomfortable, if not slightly racist, around Roweena and her family and friends? Sure. However, Roweena’s brother is anxious to make some possibly racist political points against white people raising black children, even one that’s half white. Also, Roweena herself keeps ignoring the fact that her son, Reggie, still has some character flaws he has yet to overcome.

Eventually, everything leads to some tense courtroom scenes and tense confrontation scenes between Elliot and Reggie, the last of which breaks out into violence. The resolution of these conflicts may not satisfy all viewers, but they provide some emotional relief and heart-wrenching but ultimately uplifting moments.

All in all, BLACK OR WHITE is an excellent movie for mature viewers that will inspire more understanding and wisdom rather than less. It also shows the importance of being a good parent or grandparent. In fact, it’s their care and concern for little Eloise that ultimately provides the glue to bring the movie’s family antagonists together. Strong caution is advised, however, because of the movie’s foul language, tense situations and references to overcoming drug and alcohol abuse.