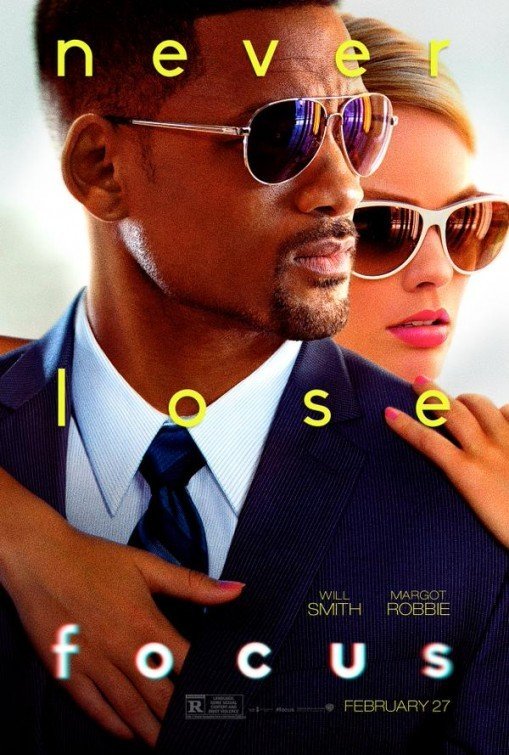 FOCUS stars Will Smith as Nicky, one of the best con men in the world until a beautiful woman walks into his life. Nicky is traveling to New Orleans to set up shop during the Super Bowl. His team of conmen starts setting things up in a huge rented space when the woman, Jess, comes into the picture. Jess throws Nicky off his game. Later, when he has a big con in place in Argentina, he finds it hard focusing on the job at hand in her presence.

FOCUS is a silly movie with a strong pagan worldview. The movie tries to be unusual, but it has plot holes. That said, Margot Robbie does a good job as Jess, as does Will Smith. FOCUS is just a popcorn movie, but the story just doesn’t come across as believable. In fact, it’s pretty forgettable. In addition, the entire story is based on deceiving and stealing from people. It’s also filled with crude comments and foul language, plus strong lewd content. So, MOVIEGUIDE® finds FOCUS unacceptable. FOCUS is morally murky, with fuzzy storytelling.

FOCUS stars Will Smith as Nicky, one of the best con men in the world until a beautiful woman walks into his life. FOCUS has a strong pagan worldview with a silly plotline and lots of strong foul language and other immoral content.

Nicky is a con man traveling to New Orleans to set up shop during the Super Bowl. His team of con people starts setting things up in a huge rented space when Jess comes into the picture. Jess and Nicky had met in New York when she tried to con him but failed. Once she finds out who he really is, she wants to be part of his operation and learn about his techniques.

Nicky decides to take Jess as his intern, showing her the ropes of conning and pick pocketing. The team goes to the most popular areas of New Orleans and steals about $1.2 million. However, even though Jess does a good con job, and the two develop a romance, Nicky decides to leave her and walk away forever.

Three years pass, and Nicky is in Argentina to work for a racecar driver named Garriga. Garriga wants Nicky to give his competitors a fake version of his car modifications in order to mess them up. When Nicky starts the job, he sees Jess, which throws everything off.

FOCUS is a silly thriller with a strong pagan worldview. The movie does try to have an unusual storyline, but it has some plot holes. That said, Margot Robbie does a good job as Jess, as does Will Smith. However, even though viewers will see FOCUS as just a popcorn flick, the storyline wasn’t believable enough even for that. Thus, FOCUS will be quickly forgotten.

Finally, the movie’s entire story is based on deceiving and stealing from people. Even though the two leads are working together, they have a hard time focusing on anything but each other. FOCUS is also filled with crude comments and foul language. It not only glorifies money and greed, it also glorifies sexual immorality.