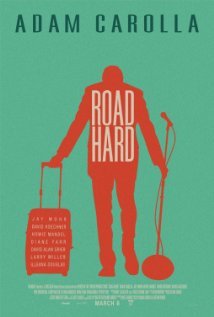 ROAD HARD stars conservative, libertarian comic Adam Carolla. Carolla plays Bruce, a former American TV star, who must perform standup comedy again at terrible clubs across the country. He’s concerned about paying for his teenage daughter’s college. His ex-wife insists on expensive private schools while he’s hoping for public colleges. Between standup gigs, Bruce’s goofy agent keeps getting him embarrassing auditions for terrible acting roles. Just when he’s ready to give up, Bruce meets an attractive, smart, caring woman who might be his key to another life away from show business.

ROAD HARD is a movie of modest means, funded from nearly $1.5 million crowdfunding money raised by Carolla. It’s meant to mix serious emotions about the protagonist finding his purpose and caring for his daughter, with some standup footage and some funny arguments. The movie will appeal primarily to Carolla’s fan base, but there’s not enough dramatic tension to intrigue other moviegoers. The movie also has excessive strong foul language, nudity and other off-color, lewd content, which overwhelms the movie’s moral, redemptive elements. MOVIEGUIDE® advises excessive for ROAD HARD.

(PaPa, B, C, LLL, V, S, NN, MM) Strong pagan, crude worldview with some light moral, redemptive elements about a former TV star, who hits the standup comedy road again and who believes in the importance of being a good father to his daughter and tries to remain friends with his ex-wife, but with lots of strong foul language and some lewd content that’s not family friendly; at least 90 to 105 obscenities and profanities (mostly “f” words); light comic violence includes an audience member chases protagonist off stage during a standup show and then beats on him in the audience, and protagonist has a heated verbal exchange with his ex-wife’s new boyfriend; implied fornication, several sexually-related jokes, protagonist’s goofy agent is a lazy perverted man who lounges by his home pool all day, with topless models lounging next to him or swimming in his pool; images of upper female nudity; alcohol use; no smoking or drugs; and, jealousy but overcome, rude behavior, laziness in side character’s personality.

ROAD HARD is the slightly autobiographical story of a former TV sitcom star who used to perform in the best clubs in the country, but who hits the road again when he falls out of favor but still needs to pay for his daughter’s college. ROAD HARD has excessive immoral and amoral pagan worldview, offset a little bit by some moral, slightly redemptive elements about the importance of being a good father, overcoming one’s jealousy and finding friendship with one’s ex-wife.

Co-written and directed by conservative libertarian comic Adam Carolla, who also stars, the movie follows the story of Bruce, a former sitcom star who has had to return to heavy traveling to perform standup comedy shows at terrible clubs across the US. He’s concerned about paying for his teenage daughter’s college. His ex-wife insists on expensive private schools while he’s hoping for public colleges.

Bruce’s standup gigs are pretty much interchangeable, other than written words saying what city where he’s performing. Along the way, his goofy, perverted agent (Larry Miller) keeps getting him embarrassing auditions for terrible acting roles. Just when he’s ready to give up hope, Bruce meets an attractive, smart and caring woman who might be his key to another life away from show business.

ROAD HARD is a movie of modest means, having been funded by nearly $1.5 million raised from crowdfunding by Carolla. It’s meant to combine some serious emotions about finding his purpose and caring for his daughter with a mix of standup footage and the funny arguments the protagonist has with his agent.

The movie will appeal primarily to Carolla’s ample fan base, but there’s not enough dramatic tension to intrigue those not familiar with his creative career. The movie also has too much strong foul language, nudity and other off-color, lewd content that won’t appeal to media-wise moviegoers. The nice ending, where the protagonist finds happiness away from show business, offsets some of the movie’s negative content. MOVIEGUIDE® advises excessive for ROAD HARD.