"Saved by the Cross of Christ" 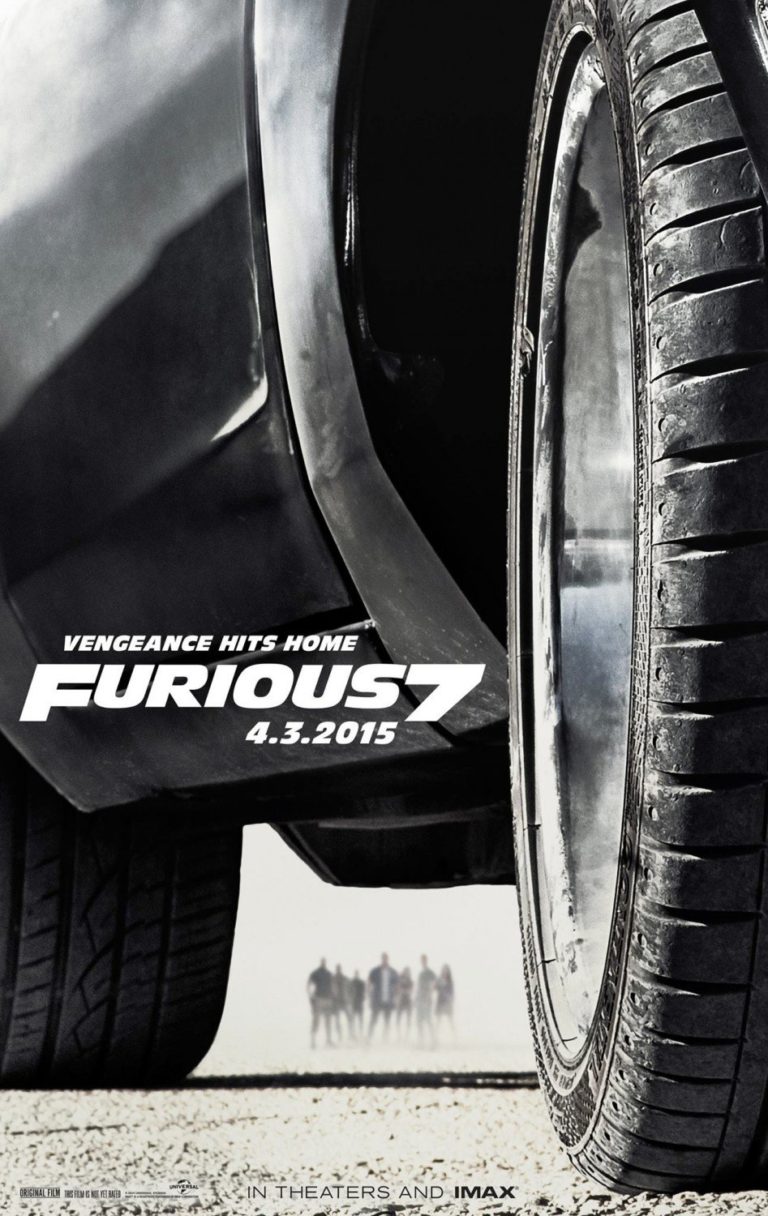 The FAST AND FURIOUS gang returns for “one last ride” in FURIOUS 7. Once again, Vin Diesel and the late Paul Walker play Dom and Brian, Dom’s brother-in-law. They and their team of drag racers helped the government put away a British cyber terrorist. Now, however, the terrorist’s mean brother, a former British commando, is seeking revenge. He’s already murdered their Japanese friend. The brother comes after Dom and Brian’s team, including their families. Using a computer device on loan from the government that can track anyone, the team tries to stop the brother before he kills everyone.

Moviegoers will differ on which sequel is better, but FURIOUS 7 has all the bells and whistles action fans expect from this franchise recently. The turbocharged action – and funny one liners – come fast and furious. Like the previous movies, FURIOUS 7 adds some surprisingly positive Christian references as the good guys battle more very bad guys. However, FURIOUS 7 contains lots of foul language, brief shots of girls wearing skimpy string bikinis and super-intense action violence. So, strong and extreme caution is advised.

(BB, CCC, LLL, VVV, S, NN, A, M) Strong moral worldview with family often extolled, very strong Christian, redemptive allegorical allusions, Christian funeral, Christian marriage before a priest, symbolic death and resurrection using a Cross of Christ as a significant symbol that metaphorically suggests a character is “saved” by the Cross, silent prayer in one scene, people use the Sign of the Cross in at least three shots for protection/appeals to God; about 41 obscenities (including “h,” “s,” “d,” a** words, a “b” word, and one “f” word by one character that’s held partially under his breath), five GDs, and one light exclamatory profanity; lots of intense action violence with some blood (but nothing extremely gory), including intense fistfights, intense fight with four steel bars, man has bloody wound on his shirt, explosions, intense car chases, large drone tries to explode cars with two people in them with missiles, machine gun fire, people hang on for dear life above dangerous heights, people fall and tumble about, men and women thrown against objects, people fall from heights, people shot, cars crash through windows, etc.; no sex scenes but suggestive dancing, women in bikinis and other skimpy clothing, men talk about women (but not extremely crudely though not innocently either); partial and rear female nudity as some women wear string bikinis (one wears a thong bikini under her very short skirt), female cleavage and upper male nudity (including in hospital bed in scenes with injured man); beer drinking and alcohol at a fancy party; no smoking or drugs; and, villain is out for revenge and kills one close friend of the good guys, intending to go after the rest.

Led by Vin Diesel as Dom Toretto, the FAST AND FURIOUS gang returns for “one last ride” in FURIOUS 7, as the brother of the last movie’s villain comes looking for revenge. This is also the late Paul Walker’s moving “swan song” to the franchise. The stunts in FURIOUS 7 are slightly more believable than, but just as turbocharged as, the climactic battle with the speeding airplane in the last movie, but the one-liners come even more “fast and furious.” It’s a fun movie that, like other installments in the franchise, has some surprisingly overt Christian references, but extreme caution is advised for mature viewers due to foul language, some images of string bikini bottoms and lots of intense action sequences.

The movie opens with Jason Statham as Deckard Shaw, a former British commando “visiting” his brother in a London hospital. Surrounded by guards that Shaw has violently dispatched, Shaw’s brother was captured by Dom Torretto’s crew in exchange for full pardons after they had broken Dom out of jail when a judge gave Dom a heavy prison sentence even though he helped Brian stop a drug dealer. Shaw now wants revenge against Dom’s crew.

Shaw shows up at the office of the federal agent Hobbs (Dwayne Johnson), who’s now friends with Dom, Brian and their crew or team. Hobbs and his female assistant barely survive his attack, but Shaw gets away with all the personal files of Dom, Brian and their team, including Brian’s family and Dom’s wife, who’s lost her memory.

Cut to Dom, Brian and Brian’s wife, Mia, and son, Jack, at Dom’s house in Los Angeles. A large package arrives but turns out to be a bomb from Shaw. The bomb explodes, but everyone survives.

The anonymous head of a super-secret American spy agency, played by Kurt Russell, hears what’s happened to Hobbs, Dom and Brian. He asks Dom to save a kidnapped computer genius, who’s hidden a spying device called God’s Eye that can track down anyone. If Dom, Brian and their team can rescue the genius and retrieve the device for the government, he’ll let Dom use the device to track down Shaw and kill him or capture him for the authorities. Of course, Shaw won’t go willingly, so it’s probably gonna be him or them.

Dom, Brian and the team come up with a daring plan to rescue the computer genius from the African mercenary who kidnapped the genius. All the while, Shaw is hunting them.

Of course, a final showdown between Shaw and the Fast and Furious crew is sure to come sooner or later. After rescuing the computer genius and getting the device, Dom decides the final showdown should be on their turf – Los Angeles. There’s only one problem with that plan. Shaw has brought along the African mercenary and his soldiers, who have a military helicopter and a large missile-firing drone with them.

FURIOUS 7 is filled with spectacular action sequences involving cars, vans, military vehicles, a helicopter, and, eventually, a large missile-shooting drone. In the midst of all the mayhem is a parachute drop involving some racecars, including a special armored racecar driven by Dom, who will be the person to take the computer genius in his vehicle when Dom and Brian’s team confronts the kidnappers’ speeding convoy on a treacherous mountain road.

Some moviegoers will prefer the fourth FAST AND FURIOUS sequel, titled FAST FIVE. Others will prefer the fifth sequel, FAST AND FURIOUS 6. Still others will prefer FURIOUS 7, or perhaps even the first of these fast-moving cinematic juggernauts. One thing’s for sure, however, FURIOUS 7 has all the bells and whistles moviegoers and action fans could possibly want. It also has a lot of fast and furious funny one-liners, some of which may induce some groans but others of which are both fun and clever. The Rock, aka Dwayne Johnson, delivers some of the best one-liners, especially at the end when he makes a grand entrance.

The good news is that, although there’s no overt prayer to Jesus as in the last movie, FURIOUS 7 still uses the overt Christian references and symbolism that seems to set this franchise apart from others. Thus, there’s a scene where Dom’s team is silently praying. There’s other scenes where some good guys do the Sign of the Cross in a clear appeal to the Holy Trinity and God for protection. There’s also brief wedding vows in front of a Catholic priest and an implied Christian funeral for one character. Finally, during the resolution of the final plot problem, there’s a symbolic death and resurrection that involves an actual Cross. In fact, in that scene, a person is (at least metaphorically) “saved by the Cross of Christ.”

Throughout FURIOUS 7, the importance of family is stressed, not only Dom and Brian’s literal families, but also the family atmosphere that’s developed between them and their close friends. “I don’t have friends; I have family,” Dom says at one point.

Another good thing about this movie is that the good guys eschew revenge and vengeance for vengeance’s sake, although it’s clear Dom is very angry at the villain for trying to kill Brian’s wife and child. Dom is also righteously angry about the villain killing their Japanese friend in Tokyo from the previous movies. This leads to an intense final fight with the villain involving the use of steel tire irons and bars, but the bars are added to increase the jeopardy in the movie more than anything else. The movie’s actual dialogue calls this final fight a “street fight,” but as Dom eventually tells the villain, sometimes in a street fight, the street wins. Ultimately, the ending to this conflict between Dom and the villain is a positive one that stresses righteous justice and punishment, not revenge.

The cast does a good job taking the franchise to another new level. The brotherly interaction between Vin Diesel and Paul Walker is positive, as is the relationship between Dom and his wife (played by Michelle Rodriguez), who’s lost her memory. It was a good idea to add Kurt Russell as the mysterious head of a super-secret spy agency. Kurt is always lots of fun in almost anything he does. The addition of Dwayne Johnson since the fourth sequel remains a brilliant stroke that adds punch to these stories of fast and furious racecars and the adrenaline junkies who drive them while battling bad guys.

FURIOUS 7 pays a fitting tribute to the late Paul Walker, who plays Brian. Walker died while making this movie, and the filmmakers have done a great job making it seem as if he was there throughout all the filming. Images from Walker’s other appearances in this franchise are certain to bring a tear to the eyes of those fans who enjoyed his performances and who were saddened by his sudden tragic death.

Though there are no explicit sex scenes in FURIOUS 7, there are some scenes of a party in Abu Dhabi for a rich Jordanian price and a racing event where some of the women wear string bikinis and briefly do some suggestive dancing. These two sequences include some images of rear female nudity, including partial rear nudity. Also, two of the good guys are enamored with a pretty woman they meet, and there’s brief talk about her having a “beautiful body,” but they don’t say anything really crude beyond that.

FURIOUS 7 also has lots of foul language. The worst obscenities are some “s” words and one “f” word that’s partially muttered under a character’s breath. There are also three GDs uttered.

Of course, FURIOUS 7 has lots of intense action violence. The violence includes some extreme stunts, crazy driving, lots of gunfire, multiple explosions, people thrown into walls or objects, and intense hand-to-hand combat. The amount, and some of the intensity, of the violence is very strong, but not extremely bloody or graphic.