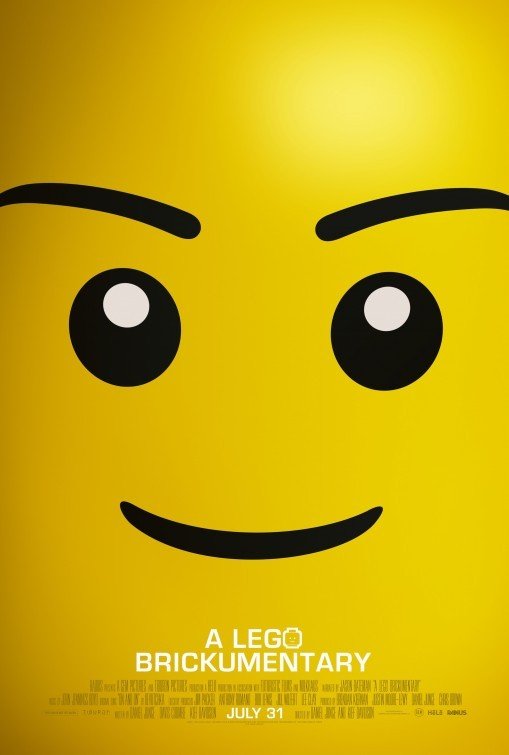 A LEGO BRICKUMENTARY takes a look at the worldwide phenomenon of LEGOs both as toys and tools. It follows mostly adult fans of the brand who spend their hobby hours building elaborate, intricate models. Some of them even compete in global contests, hoping to gain the attention of LEGO designers. The movie also explores artists and filmmakers using the toy as a serious medium for their projects despite critical skepticism. Perhaps most intriguingly, it showcases the use of LEGOs by architects, scientists and engineers as tools to help further their research.

This documentary will easily attract all ages. LEGO fans especially will watch eagerly while those less familiar with the brand might stare at the screen in disbelief. The documentary moves at almost whirlwind speed through dozens of scenarios where LEGOs are used. It never parks long enough to explore the various people in any real depth. Ultimately, A LEGO BRICKUMENTARY celebrates what is a uniquely capitalist phenomenon. However, off color content in a couple brief scenes and references to evolution in another scene warrant some caution, especially for older children.

A LEGO BRICKUMENTARY is a fun, entertaining documentary about the phenomenon and public affection for LEGO toys, the construction toy consisting of plastic bricks and other standardized components that fit together with studs. Ultimately, A LEGO BRICKUMENTARY celebrates a unique capitalist phenomenon, but some off color content in a couple short scenes and references to evolution in another scene warrant caution for older children.

The movies opens in the far reaches of outer space. Three silver-tinted LEGO fingers hurdle through the stars, obviously on a mission of sorts. Their trek is interrupted and the focus is brought back down to Earth as a montage of scenes shows children from all corners of the globe quietly playing with their LEGO sets in the comfort of their homes. The narrator, a golden-skinned LEGO mini-figure, crawls out from underneath a pile of the spilled toy bricks and officially begins the journey to discover the worldwide appeal of LEGOs as both toys and tools.

The first stop is Denmark, where LEGOs began as an idea by a humble carpenter in the early 20th Century. This segment hilariously recounts the burning down of his shop on three separate occasions, but highlights the perseverance employed in creating what would become one of the most popular toy brands ever.

Cut to present day Denmark where a little tour is taken through the various departments at LEGO’s headquarters. Employees describe their jobs as a child’s dream come true where they get to play with toys all day. Later in the movie, the official LEGO builders compete with adult fans at a LEGO convention in a contest to see who can come up with the most creative design surrounding the current year’s theme, pigs versus cows.

The first half of the documentary stays on the more playful side. It features child and adult LEGO enthusiasts who take their hobby to the next level by building intricate cities and huge models like the life-size STAR WARS X-plane, which used more than five million bricks. Things turn more cerebral as attention is drawn to artists who use LEGOS to make detailed sculptures or stop-motion films. Then come the scientists. Engineers at MIT use LEGOs to build models to test their ideas. Psychologists use the toy to help autistic children learn to cooperate in a team environment as a group works together to build a LEGO creation. One of the Mars Rover engineers at NASA designed his own version of a LEGO Mars Rover for entry into a fan-led contest where the winner’s design got to become the next official LEGO model. Interspersed with all this are scenes showing the ultimate in LEGO fandom as people from all over the world descend on conventions, not unlike a mass of the better-known fan group of STAR TREK fans, or “Trekkies.”

A LEGO BRICKUMENTARY will easily attract viewers of almost all ages. LEGO fans especially will watch with barely-contained zeal while those less familiar with the brand’s phenomenon might stare at the screen in disbelief. Nearly everyone in the civilized world who has grown up in recent decades likely played with or knows someone who played with LEGOs. That personal connection serves the movie well by giving it a broad appeal. In an effort to show just how broad that appeal really is, the doc moves at almost whirlwind speed through what seems like dozens of scenarios where LEGOs are used. It never parks long enough to explore the various fans in any real depth. Perhaps it would have been better to narrow things down a bit and go beyond the surface.

Three scenes in the movie present a few problems.

First, one person being interviewed describes the human creative process as having evolved over millennia when living beings adapted to the environment and now are able to control it rather than being subject to it as in “caveman” days. Playing simultaneously is an animated clip showing LEGO creatures evolving from a small reptile to a human.

Ultimately, A LEGO BRICKUMENTARY celebrates what is a uniquely capitalist phenomenon. However, the references to evolution and the off color content mentioned above warrant some caution, especially for older children.