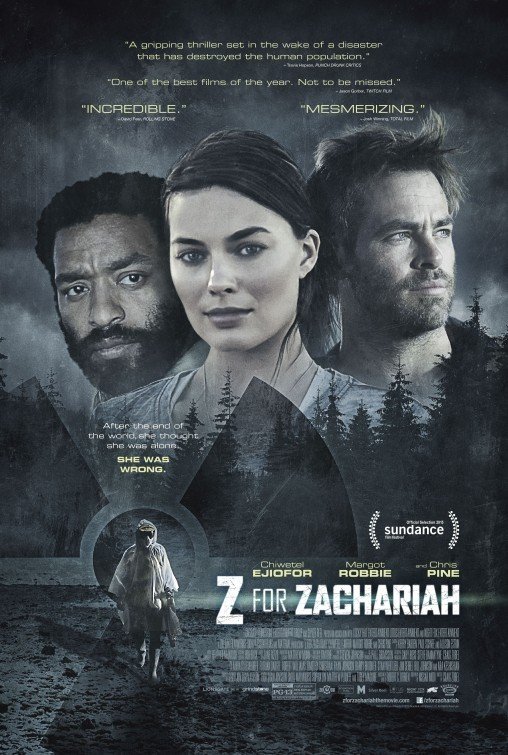 Z FOR ZACHARIAH is based on the post-apocalyptic novel by Robert O’Brien. The movie is set in the wake of a nuclear war where one woman believes she’s the last person on Earth until she finds a mad scientist on her land. The two develop a trusting bond, becoming friends and almost lovers, until a miner enters the picture. As a romantic spark soars between the woman and the miner, the scientist becomes jealous and makes a bold decision to end the miner’s life.

Z FOR ZACHARIAH has a steady flow of visually appealing shots, but the relationships between the three characters are confusing as the audience grapples to understand who’s the movie’s antagonist. Each character lets their emotions get the best of them, proving every human is flawed to some extent and only God can save us from our sins. The movie is a steady stream of open-ended scenes, allowing viewers to come to their own conclusions. Z FOR ZACHARIAH is a compelling spin on the story of Adam and Eve, with strong Christian elements, but the love triangle warrants extreme caution.

(CC, BB, L, V, SS, N, AA, MM) Strong biblical worldview, set in post apocalypse woman displays great faith and devotion to God, woman brings stranger into her home and nurses him back to health showing sincere compassion, woman shares all her food with two strangers, woman doesn’t wear revealing clothing and dresses modestly careful not to tease men with her body, woman prays daily before each meal and says she feels happiest inside the church her daddy built, as well as strong Christian redemptive elements, woman reads the Bible in her free time, woman plays organ in abandoned church for God, woman displays great devotion to God and openly talks about His love as her only source of comfort and hope; one “d” word, one profanity, and vomiting; mild violence includes man drinks too much and shoves girl against the door, frustrated man throws medicine to the side and implied murder; depicted clothed, drunken fornication in one scene and passionate kiss; upper male nudity, naked back of girl in her underwear while she washes, and shot of woman’s bare legs when man lifts up her dress; alcohol use and drunkenness; no smoking or illegal drugs but medical drugs are used to help man get rid of radiation poisoning and woman sticks drugs in man’s vein with a needle; and, jealousy, lying, revenge, and greed displayed.

Z FOR ZACHARIAH is a science fiction movie about a bold young woman who believes she’s the last woman on earth after a nuclear war, until two strangers, a scientist and a miner, wander onto her land, creating a complicated love triangle. Z FOR ZACHARIAH is a compelling spin on the story of Adam and Eve, with strong Christian, biblical elements, but the love triangle warrants some caution.

The movie is based on the post-apocalyptic novel by Robert C. O’Brien, where a radioactive element has obliterated most of civilization, except for one young farm girl. Ann Burden (Margot Robbie) has been surviving on her own, believing she is the last woman on Earth. Then, one day she discovers another human being. John Loomis (Chiwetel Ejiofor), a distraught scientist driven mad by radiation exposure, begs for her help. Ann, a faithful and compassionate believer, displaying admirable Christian qualities, brings John into her home and nurses him back to health.

Ann and John develop a trusting relationship, each grateful for another human to rebuild life together. Despite John’s atheist views, Ann continues to display strong biblical faith. She prays before each meal, visits her family’s abandoned church daily and reads her Bible. She doesn’t press John with her beliefs, but, through her kindness and devotion to God, she conveys a great light of hopefulness that John doesn’t display.

When a stranger, Caleb (Chris Pine), enters the valley, the bond between Ann and John is tested. A miner from a nearby town, Caleb is a strong Christian too. He prays to God and thanks him for his life. Ann, in awe by his faith and good looks, begins to develop feelings for him, but this upsets John.

Threatened by another man, John’s jealous feelings take over. After a drunken night where Caleb and Ann have sexual relations, John decides it’s time to get rid of Caleb.

Z FOR ZECHARIAH is a compelling spin on a modern day version of the Garden of Eden where Ann is tempted by an unlikely person, similar to the story of Eve and the serpent Eden. However, the movie has an open ending that may not satisfy all viewers.

That said, the movie has a strong Christian, moral worldview stressing Ann and Caleb’s strong faith in God and redemptive elements of kindness and generosity. Yet, with the addition of John the atheist, the movie shows that sin will always be there to tempt us, and that, no matter how great our faith is, the Devil is always lurking. Hopefully, the open ending will provide a great outlet for discussion about sin in today’s society. However, extreme caution is advised for scenes of drunkenness and sensuality.