THE LEGEND OF TARZAN

"Tarzan Triumphs, But Not Totally" 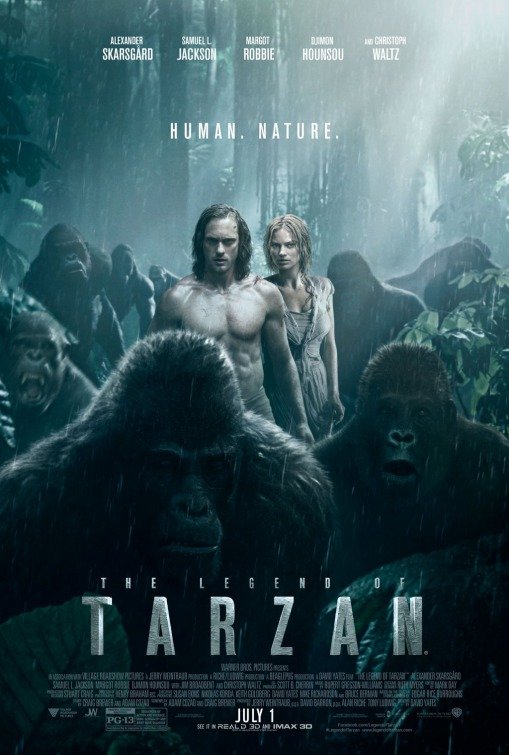 THE LEGEND OF TARZAN opens on Captain Leon Rom, the representative of Belgium’s King Leopold II in the Congo. Rom agrees to lure Tarzan to his nemesis, a tribal chief, if the chief will give Rom the diamonds the chief’s tribe has collected. In London, a former American soldier persuades Tarzan, aka Lord Greystoke, to come to the Congo to investigate how badly the king’s people mistreat the natives. Tarzan’s American wife, Jane, convinces Tarzan to let her come. In the Congo, Rom kidnaps Jane to lure Tarzan to his death.

THE LEGEND OF TARZAN presents a mixed bag. The movie delivers a rousing, crowd-pleasing adventure with lots of marvelous action and good performances. However, though based partly in history, there are some anachronisms and incredible storytelling. The movie’s worldview is also mixed. It has a couple positive references to God and prayer, strong pro-family sentiments, and a strong rebuke to slavery. However, LEGEND OF TARZAN has brief crude, foul language and intense action. Worse, the main villain is clearly identified as a Catholic who carries rosary beads. So, extreme caution is advised.

(Pa, BBB, C, AbAb, PC, Ho, L, VV, S, N, A, M) Light mixed pagan worldview with very strong moral elements that include strong pro-family elements, children are seen as a joy and a blessing, Tarzan admits a past wrong and asks for forgiveness, there are a couple positive references to God and prayer, liberty is extolled, and slavery is strongly opposed, but the main villain is a overtly seen as a Catholic who carries around rosary beads, and there’s a politically correct, implied homosexual comment where Jane snidely remarks that the villain seems to have been awfully close to his mentor, a Catholic priest; six obscenities (one “s” word), one strong profanity and two light profanities; strong, sometimes intense violence and action includes swinging from vines, two fights with large scary gorillas, gun battles, villain kidnaps Jane, villain tries to strangle Tarzan with rosary beads, gorillas shot dead by villain’s henchmen, gorilla bites Tarzan on back of shoulder, and he uses large jungle ants on the wound, men jump from a great height into trees, gorilla threatens baby boy and young boy, people speared, fighting, an explosion occurs, alligators attack a man, and water buffalo stampede through a port; implied marital sex after Tarzan passionately kisses his wife Jane and a young Tarzan sniffs Jane when he first meets her, plus Tarzan tells a man to bow down before a gorilla, and man jokes, “Do you want me to lick his nuts too?”; upper male nudity of Tarzan and natives; brief alcohol use; no smoking or drugs; and, kidnapping and slavery, but strongly rebuked, and man admits he did bad things in America when a soldier after the Civil War fighting the Indians, which he indicates were too often abused and wrongly killed.

THE LEGEND OF TARZAN envisions the iconic hero of the original novels returning to the Belgium Congo to investigate if Belgium’s King Leopold II is planning to exploit and enslave the native population there. Despite some anachronisms and fantastic storytelling, THE LEGEND OF TARZAN is a well-produced, exciting, crowd-pleasing adventure story, with some positive elements, including positive references to God and prayer by Tarzan’s human father, but the ruthless villain is depicted as a devious Catholic out to enrich himself and his king.

THE LEGEND OF TARZAN contains flashbacks to Tarzan’s earlier life as an orphaned boy cared for by a female gorilla, who takes him for her son. The flashbacks reveal some important plot points that provide background information to the movie’s main story.

The movie opens on Captain Leon Rom, a representative of Belgium’s King Leopold II, who’s just bought the Congo to enrich himself and his friends. Accompanied by some Belgium troops, Rom is searching for the source of diamonds in the mountains. He runs up against a tribe run by Chief Mbonga (“Monga”), Tarzan’s long-time nemesis. After the tribe kills Rom’s soldiers, Mbonga tells Rom he can have the diamond mines if he lures Tarzan to him.

Back in London, a former American soldier, George Washington Williams, played by Samuel L. Jackson, persuades Tarzan, aka Lord Greystoke, to come with him to the Congo to investigate how the Belgian king is treating his new subjects. The rumors are not good and may even involve slavery. Tarzan’s American wife, Jane, convinces Tarzan to let her come too.

In the Congo, Tarzan, Jane and George learn the rumors are true. They also learn that Captain Rom plans to hook up with 20,000 Belgian soldiers to exploit the country’s resources and enslave the native population, including Tarzan’s old friends from the past.

Rom and his men manage to kill one of Tarzan’s African friends and kidnap Jane, but Tarzan and George go after them. What they don’t know is that Rom is trying to lure Tarzan to Chief Mbonga and his tribe so that Rom can use Mbonga’s diamonds to pay for the 20,000 soldiers coming from Belgium.

THE LEGEND OF TARZAN presents a mixed bag for media-wise viewers. As such, it gives moviegoers a Tarzan story that’s almost a perfect symbol of many of the conflicts the movie industry seems to be struggling with these days.

First, the movie delivers a rousing, crowd-pleasing adventure with lots of marvelous action, but there are some anachronistic elements and fantastic storytelling that a couple times stretches credulity. That said, Alexander Skarsgård is really good as the legendary Tarzan, as is Margot Robbie as Jane and Samuel L. Jackson as George Washington Williams, an historical figure who actually visited the Congo and wrote a famous letter to King Leopold complaining about his treatment of the indigenous people there. As always, Christoph Waltz makes an effective villain as Leon Rom, another historical figure who led Leopold’s vicious army in the Congo, among other nefarious activities.

The movie’s acceptability rating also contains some pros and cons.

On the positive side, the movie has a strong message against slavery and against King Leopold’s notorious rule of the Congo, which reportedly killed millions of people. Unlike the original novels, which have a strong Romantic worldview depicting Tarzan as the archetypal “noble savage” uncorrupted by civilization, this movie’s Tarzan at one point recognizes he’s flawed and needs forgiveness and understanding. THE LEGEND OF TARZAN also has a strong pro-family message. Children are seen as a blessing, and the love between Tarzan and his wife, Jane, remains one of fiction’s great love stories. Finally, during a couple of the flashback scenes, excerpts from the diary of Tarzan’s father contain positive references to God and prayer.

On the negative side, the main villain, Captain Rom, is seen as a Catholic. He even sometimes uses the rosary beads he constantly carries as a weapon to subdue people by strangling them or, as in one scene, stop Jane from grabbing a knife to use against him. At one point during a verbal exchange between Jane and him, Jane makes an anachronistic comment that Rom seems to have been very close to the Catholic priest who was his mentor when he was a boy. LEGEND OF TARZAN also contains some brief, mostly light, foul language, intense action violence, a crude line of dialogue meant for comedy, and implied marital sex between Jane and Tarzan in Africa during a scene where Tarzan comes to Jane and passionately kisses her before they go to bed.

Normally, MOVIEGUIDE® might give LEGEND OF TARZAN only a Minus One rating. However, because of the movie’s politically correct attack on Catholics and Catholic priests, and a couple of the incidents of crude dialogue, it deserves an extreme caution. Our rating would have been even worse were it not for the positive references to God and prayer by Tarzan’s father. The filmmakers could have fixed this problem by removing the references to the villain’s apparent religious faith, or adding some more positive Christian elements to counteract the negative ones. Neither this movie’s Tarzan nor its Jane are overtly religious, in either a Christian sense or even a Non-Christian sense. They aren’t overtly Anti-Christian, however, despite Jane’s gratuitous, snide comment about the villain’s priest.

Watch THE LEGEND OF TARZAN: