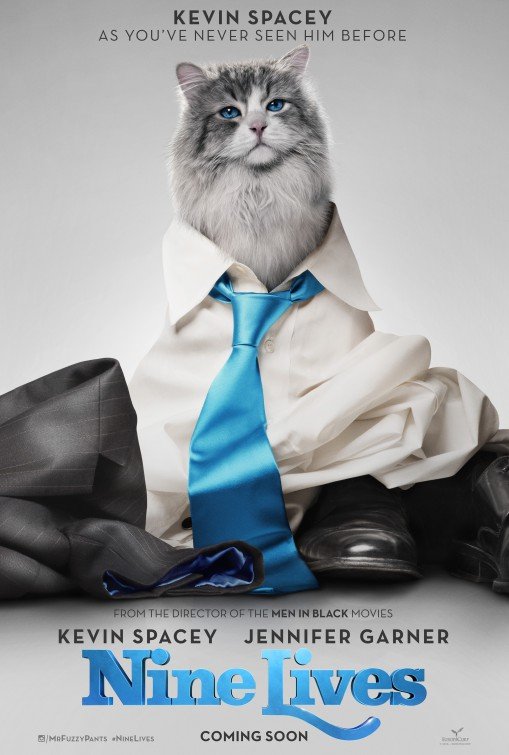 In NINE LIVES, Tom Brand is a New York billionaire whose assistant is plotting to sell Tom’s company behind his back. Tom’s 11-year-old daughter, Rebecca, has a birthday soon and asks for a cat. Feeling guilty about being a workaholic and never being home, Tom buys her a cat from a mysterious pet store owner, who picks up on Tom’s selfish nature and decides to teach him a lesson. On the way home with the cat, a freak accident transfers Tom’s soul into the cat while his body lies in a coma. Tom must learn how to sacrifice for the sake of his family.

NINE LIVES is a cheesy movie with questionable elements. Much of the humor falls flat, but there are some good laughs. It’s hard to dislike a cute little cat. There’s an element of “cat mysticism” and “cat magic” to NINE LIVES, but the basic story is about a man who must learn some lessons. In the process, family is extolled, good rewarded and evil punished. Caution is advised for children because of some foul language, drunkenness and mysticism.

(B, C, Pa, FR, O, Cap, L, V, N, AA, M) Overall moral worldview where good is rewarded and evil is punished, with a protagonist who must learn to change his ways, protagonist refers to his first wife as “Satan,” some pagan hedonism where protagonist places a priority of material wealth over that of his family, reincarnation and karma are mentioned in one scene, one character does research into cat mysticism, and the main character is a billionaire who runs a very successful company; nine obscenities and profanities (some “d” words, one “h” word and one “Jesus” word), cat urinates on things several times, girl drops her mean stepsister’s cell phone into a toilet; most of the violence is slapstick humor with the cat, a man is struck by lightening and falls off the roof of a skyscraper before crashing into a window below, a security guard is accidentally tasered, a man puts a cat in a bag and tries to throw him in the dumpster, it appears that a man is about to commit suicide but this turns out not to be the case, a family makes the decision to pull life support in the hospital, but the comatose patient recovers before this is done (this is part of the movie’s jeopardy), a cat attacks a man; no sex but protagonist thinks his second wife is cheating on him, but this turns out not to be the case; upper male nudity in a video and brief female cleavage; a cat pours himself some whiskey and gets drunk with a hangover, and several scenes show characters drinking martinis; and, protagonist is divorced and mean but changes, protagonist’s second wife reveals she’s thinking about divorcing her husband, man lets protagonist fall off a skyscraper in hopes that he’ll die, one character lies multiple times to cover up his evil plans, a mother proclaims that she’s not a good role model for children, a girl throws her mean stepsister’s cell phone into the toilet in revenge.

In NINE LIVES, a workaholic billionaire’s soul is transferred to the body of the family’s cat during a freak accident so that he can rediscover what’s most important in life. NINE LIVES is a cheesy movie with some questionable elements, but it has some redemptive qualities where good triumphs over evil, and the protagonist learns some positive lessons.

The movie opens with billionaire businessman, Tom Brand, getting ready to open his latest pet project to the public, the tallest skyscraper ever constructed in the Northern Hemisphere. Located in the heart of New York City, it will be the most iconic tower in the skyline. The only problem is that his associates think it’s a complete waste of the company’s resources. Ian Cox, Tom’s second in command, begins plotting to sell the company behind Tom’s back while simultaneously learning that a rival company is also putting up a building in Chicago that will best Tom’s by 60 feet. Unwilling to add fuel to the fire, he keeps this new information to himself.

At home, Tom’s second wife, Lara, and their 11-year-old daughter, Rebecca, are all but ignored by him. His work is the top priority in his life, and he uses his money to buy the love of his family in his absence. Rebecca has a birthday coming up and asks for a cat. Feeling guilty about being a workaholic and never being home, Tom capitulates and decides to buy her a cat. He pulls up to the nearest pet store on his GPS and follows it to an out-of-the-way pet shop called Purrkins, owned by a quirky cat whisperer, Felix Perkins. Upon meeting, Perkins mysteriously picks up on Brand’s selfish lifestyle and decides to teach him a lesson.

As he’s driving home with the cat, Mr. Fuzzypants, Tom is called by Ian to meet him at the top of the new Brand tower so he can deliver the bad news about Chicago. Tom is forced to take the cat along with him. When a lightening strike hits the antenna on top of the building, Tom is knocked unconscious. A while later he wakes up in the hospital, except he wakes up in the body of Mr. Fuzzypants and watches as the medics cart his human body away. Perkins quickly catches up to him and seems to be the only human able to hear Tom talking inside the cat’s body. He explains to Tom that he is to learn how to be a good husband and father before his human body dies, or else he’s stuck as a cat for the rest of his life. Horrified at the thought, Tom must endure the life of a cat while trying to save his company and reconnect with his family.

At first glance, NINE LIVES feels like an incredibly cheesy movie that had no business being made. There is some truth to that. However, animal lovers and children will have a soft spot for it. It’s hard to dislike a cute little cat, even if he’s only passably voiced by Kevin Spacey. The voice is a confusing distraction. The cat’s mouth never moves while talking, making it seem more like the audience is hearing the inner thoughts of the cat. However, Perkins and the viewers are able to hear every word loud and clear.

Needless to say, a major suspension of disbelief is required to get through NINE LIVES. Much of the humor falls flat, but there are some good laughs. It’s best not to try and figure out the how and why of everything because none of it makes much sense. This is definitely one of those “just roll with it” movies. Do that, and it’s mildly enjoyable. One thing’s for sure: Hollywood doesn’t make movies like this anymore, and it’s kind of nice to see one again, no matter how cheesy.

There is an element of “cat mysticism” that might require a conversation with children. Rebecca begins to sense that something is wrong with the strange behavior of the cat and does some research about cat magic online. The script doesn’t follow through on this, however, and Perkins’ ability to know all and talk to cats is never explained either.

Basically, however, the story is about a man who must learn some positive lessons. In the process of that story, family is extolled, good is rewarded, and evil is punished.

Although most of the movie’s violence is in slapstick form, one main character appears to be trying suicide until viewers find out he’s not. There’s also a discussion in the hospital about pulling Tom off life support, but that’s part of the movie’s jeopardy. Martinis are drunk in a few scenes, and Mr. Fuzzypants gets drunk on whiskey. It’s also intimated Lara is cheating on Tom, but that turns out not to be the case. At one point, Tom refers to his first wife as “Satan.” At another point, he calls their adult son “chicken” for not skydiving out of an airplane with him. Finally, there are several uses of the “d” word and some profanities. So, MOVIEGUIDE® advises caution for children.