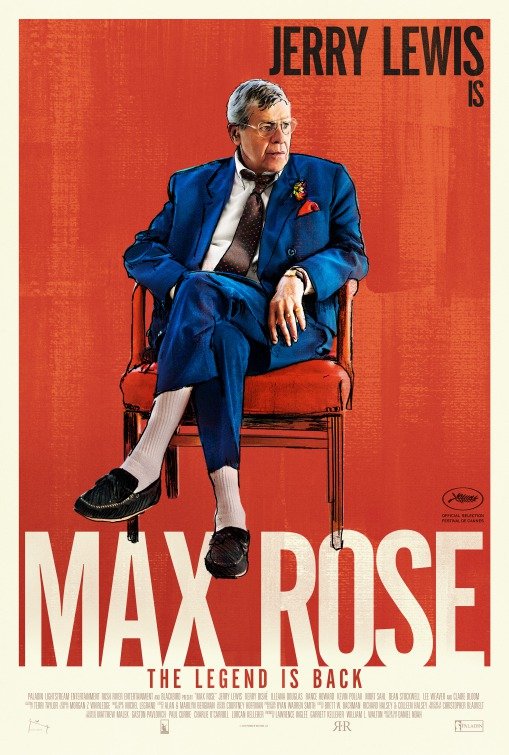 MAX ROSE stars Jerry Lewis as a jazz pianist who’s been slogging through life at age 90. When his wife of 65 years dies, he’s left with his granddaughter, Annie, and estranged son, Christopher. Annie cares for Max until he suffers a heart attack and must live in an assisted-living community. Before that happens, he finds a love note that a man named Ben gave his wife in 1959. Convinced she had an affair with Ben, Max spends the rest of the movie sulking, until a friend convinces him to confront Ben. Along the way, Max learns to lighten up with other elderly male friends.

MAX ROSE takes develops slowly, and its subject matter limits its entertainment value. Writer/Director Daniel Noah has pulled off an impressive feat getting Jerry Lewis to do his first major role since 1995, but he doesn’t give Jerry enough to do. Though it’s always nice to see Jerry Lewis on the big screen, not to mention Dean Stockwell and Kevin Pollack, MAX ROSE is for audiences who appreciate slow dramas. MAX ROSE has a few objectionable elements.

(Ro, B, C, L, S, AA, M) Light Romantic worldview with some light moral, redemptive elements promoting family and forgiveness, plus a suggestion that there’s life after death; two obscenities; no violence but man’s wife dies, and he suffers a heart attack later; no sex scenes or crude sexual content, but man thinks his wife cheated on him because another man tried to woo his wife away from him many years ago; no nudity; his other elderly male friends get drunk while clowning around in their assisted-living home one night; non smoking or drugs; and, protagonist and son are estranged but reconcile and protagonist is angry at his rival and his wife, who may have had an affair, but the resolution of this main plot has a positive ending.

MAX ROSE is a downbeat drama starring Jerry Lewis, about an old man who, after his wife’s death, believes he’s found evidence of an affair she had and tries to find out what happened. It’s good to see Jerry Lewis on the big screen again, but MAX ROSE moves slowly, with some poor lighting effects, and has a light Romantic worldview with light moral, redemptive elements and a couple obscenities and some mature themes requiring caution for older children.

Max Rose (Jerry Lewis) is a jazz pianist who’s been slogging through life at age 90 when his wife of 65 years dies, and he’s left alone, except for his granddaughter, Annie (Kerry Bishé), and estranged son Christopher (Kevin Pollak). Annie constantly cares for him until Max suffers a heart attack and must be placed in an assisted-living community.

Before he’s sent there, Max found a love note and piece of jewelry that a man named Ben Tracey (Dean Stockwell) gave his wife back in 1959. Convinced Ava had an affair with Ben, Max spends the rest of the movie depressively sulking about how his entire life and marriage has been a fraud, until he’s convinced by a friend in his community to go find and confront Ben.

Along the way, Max learns to lighten up with other elderly male friends in his community and eventually goes to confront Ben.

MAX ROSE takes its time to develop, and its subject matter limits its entertainment value. It’s regrettably shot in very dark shadow for many scenes, making it difficult to watch and hiding some of what should be the best acting moments for Lewis and Stockwell.

Max had no apparent good reason to treat his son coldly, and thus their ultimate reconciliation never has much emotional payoff either. Overall, writer-director Daniel Noah has pulled off an impressive feat in getting Lewis to take on his first leading role since the early 1990s, but the movie could have given him more to do. It has a light Romantic worldview with light moral, redemptive elements and a couple obscenities and some mature themes requiring caution for children. Though it’s always nice to see Jerry Lewis on the big screen again, not to mention Dean Stockwell and Kevin Pollack, MAX ROSE is for audiences with particular appreciations of slow moving dramas.