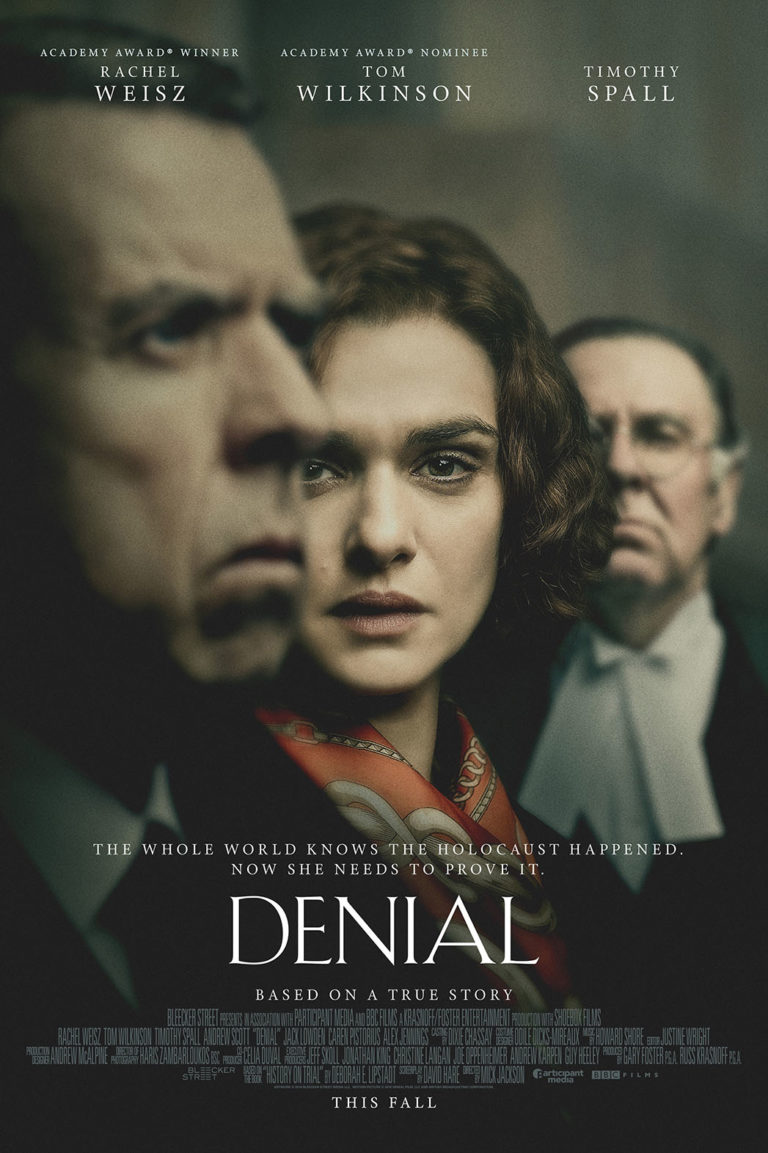 DENIAL is a courtroom drama about a libel case in London where an infamous Holocaust denier sues an American Jewish scholar. David Irving, a Holocaust denier from Britain, sues Holocaust historian Deborah Lipstadt in a British court for defaming his work in one of her books. To her dismay, Deborah learns that, according to England’s libel laws, she’s presumed guilty unless she proves her innocence. So, she and her lawyers decide to prove Irving is a committed Anti-Semite who deliberately manipulates the evidence.

DENIAL is a compelling courtroom drama, though MOVIEGUIDE® thinks some of the acting, direction and drama could have been better and more powerful. That said, an eerie visit to Auschwitz and some of the scenes between Rachel Weisz as Deborah and Tom Wilkinson as Rachel’s barrister are riveting. Also, the movie provides a strong defense for the basic facts surrounding the Holocaust and for the mass murders that occurred at Auschwitz. Some foul language and tragic references to Hitler’s extermination of 5-6 million Jews warrant caution for older children. Otherwise, DENIAL is an important movie setting the historical record straight.

(BBB, ACACAC, L, V, A, D, M) Very strong moral worldview effectively confirming the horrors of the Holocaust and condemning the murderous National Socialist tyranny under Hitler as well as his modern-day Anti-Semitic admirers, including one or two references to God; one “f” word, two “s” words, two “h” words, and four light exclamatory profanities such as MG or Good Lord!; one or two photographs of dead Holocaust victims and references to mass murder and gas chambers, plus a visit to the Auschwitz death camp; no sex; some nude bodies in one or two photographs but nothing explicit shown; some alcohol use; no smoking or drugs; and, Anti-Semitism, lying and false manipulation of evidence but rebuked.

DENIAL is a courtroom drama about a 1999 libel case in London when an infamous Holocaust denier sues an American Jewish scholar, who dismissed the man’s work in one of her books. DENIAL is a compelling courtroom drama with a strong moral worldview, but some brief foul language and references to the mass murder of Jews and other people warrant caution for older children.

The movie begins with Holocaust researcher Deborah Lipstadt giving a college lecture in Atlanta in 1994 about her latest book, which discussed Holocaust deniers. David Irving, a notorious Holocaust denier from Britain, tries to disrupt her lecture while two of his friends videotape their confrontation.

Toward the end of 1996, Irving sues Deborah for libel in a London court. He’s upset by her dismissal of his work that she referenced in her book. Irving claims she’s lying about his own research while unfairly attacking his own competence as a historian.

On a suggestion by her American publisher, Deborah hires the British solicitor who happened to be Prince Diana’s divorce lawyer. To her dismay, Deborah learns that, according to England’s libel laws, she’s presumed guilty unless she can prove her innocence. They decide to prove Irving is the real liar, which will absolve her of the comments she made in her book. They also decide to focus on the facts concerning what happened at Auschwitz-Birkenau, the most notorious of Hitler’s death camps.

However, Deborah’s upset that the solicitor and the barrister who will defend her in court firmly suggest that neither she, nor any Holocaust survivors, be called to the witness stand to testify. The British lawyers feel that Irving will be able to attack their credibility in court in ways that will unfairly cast too much doubt on the facts of the Holocaust in the minds of the public, especially among the Holocaust deniers and Anti-Semitic groups with whom Irving collaborates. For example, if any of the survivors can’t remember an important detail, it could put their whole case in jeopardy and forever taint the evidence for the Holocaust. Deborah’s also amazed to learn that the leading group of Jews and Holocaust survivors in London wish Deborah would just pay off Irving and settle his lawsuit instead of giving him a public platform in court.

The actual trial begins in 1999. Can Deborah help her lawyers find a roundabout way to honor the testimony of the survivors? Will she be able to deny her own ego, which urges her to go up on the witness stand anyway? Can she turn around the opinion of those who say she shouldn’t have given Irving a platform? Finally, when the judge throws them a curveball during the trial, can they find a way to limit or overcome the damage?

DENIAL is a compelling courtroom drama, though MOVIEGUIDE® thinks some of the acting, direction and drama could have been better, more concise and more powerful. That said, an eerie visit to Auschwitz and the scenes with Deborah and her barrister, played by Rachel Weisz and Tom Wilkinson, are absolutely riveting.

Best of all, the movie provides a strong defense for the basic facts surrounding the Holocaust and especially for the mass murders that occurred at Auschwitz. The judge in the case firmly ruled that the defense’s case was “substantially true” and that Irving had deliberately and falsely manipulated facts to let Adolf Hitler and his minions off the hook and to support Irving’s own Anti-Semitic, racist views. In just one example, Irving claims that one major gas chamber was really used by German soldiers for showering but Deborah and her lawyers prove the gas chamber’s location was two miles from the German barracks. Some foul language and references to the murder of Jews during World War II warrant caution for older children. Otherwise, DENIAL is an important, highly watchable movie setting the historical record straight.