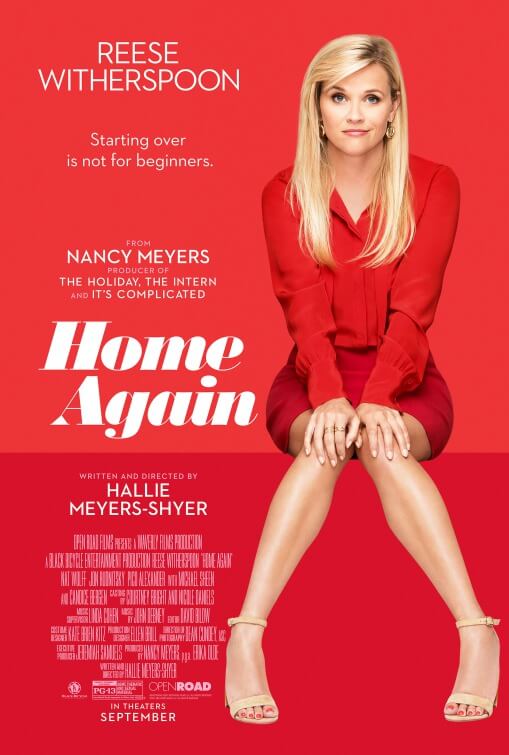 HOME AGAIN stars Reese Witherspoon, who plays newly separated Alice Kinney, as she turns 40 years old and enters into a life of single motherhood. With her two daughters in tow, Alice moves back to her mother’s house in Los Angeles. While celebrating her birthday, Alice meets three young, attractive male filmmakers on the verge of success. She reluctantly shelters them after they’re evicted. A romance soon follows with one of the young men, an aspiring director named Harry. This romance triggers a lot of often comical confusion and conflict when Alice’s husband arrives to patch things up with her.

HOME AGAIN contains many heartwarming elements. These include Alice’s relationship with her daughters and a budding romance between George, one of the three men, and Alice’s older daughter. However, HOME AGAIN has a strong Romantic, humanist worldview where characters make decisions based on their emotions, apart from God and biblical principles. HOME AGAIN also embraces the idea of divorce at the end and contains some foul language, many examples of moral relativism and very light references to substance abuse.

(PaPaPa, RoRo, HH, B, LL, V, SS, N, AA, DD, MM) Very strong mixed pagan worldview with strong Romantic, humanist elements where there’s not even the slightest hint of a moral compass guiding any of the characters, the main character A separates from her husband because of his poor decisions and sleeps with another man multiple times although she is still married and only separated from her husband, all of the characters seem to have a “que sera sera” type of attitude, the main character allows her heart and feelings to guide the majority of her decisions, good or bad, she makes the decision to divorce her husband even though he comes to her asking to work it out, and everyone seems to be perfectly okay with divorce, plus some positive moral elements regarding the main character’s relationship with her two daughters; 14 obscenities and profanities (including several GDs), plus a man is heard vomiting in the bathroom after having too much to drink; light violence, the worst of which is two men get into a mild fist fight and wrestle on the ground outside with a bit of scrapes/blood on their faces, but nothing excessive or disturbing; a moderate amount of sexual content such as many mentions of the past multiple occurrences of adultery to many other women by the main character’s father (including the fact he got another woman pregnant while married to her mother), main character sleeps with one of three younger men staying at her house multiple times although she’s only separated and not divorced yet from her husband; brief upper male nudity in a hot tub and when two men strip down to their skivvies to swim in the ocean, plus a woman’s bare back is shown; alcohol use and drunkenness in several scenes (one man gets sick during a woman’s birthday celebration), including main character goes on a date with a man and gets drunk and lays out on a bench outside until someone picks her up; cigarette smoking includes images of actors in movies smoking cigarettes and some drug references such as one character unpacks his bag and a small plastic bag of marijuana falls out, a young daughter asks to be put on anti-depressants “just like all the other kids,” and main character pops a pill for anxiety; and, strong miscellaneous content includes depiction of a dysfunctional family, main character separates from her husband with her two children and moves them across the country, divorce is validated, main character only saw her father every other weekend as a child growing up, and many examples of moral relativism.

HOME AGAIN stars Reese Witherspoon as Alice Kinney, the daughter of a famous classic Hollywood director known for his movies featuring Alice’s mother. The story opens as Alice is settling into her childhood home in Los Angeles with her two young daughters after they have left New York, including Alice’s husband, the father of their children. Alice has been separated from Austen for about five months. Alice isn’t romantically involved with anyone else. She’s just trying to get her feet on the ground back in her old home and maintain a relatively normal life for her daughters.

On her birthday, Alice goes out for dinner and drinks with some friends. She stumbles into three young filmmakers, new to Los Angeles and ready to pursue all the opportunities the entertainment capital of the world offers. Immediately attracted to one of the guys, Harry, Alice invites the three men back to her house. There, Harry gets sick after drinking too much and vomits, keeping her from doing something she might regret in the morning.

The next day, Alice’s mother brings the girls back home earlier than expected, and they all run into each other, catching everyone off guard. After one of the young filmmakers, George, accidentally stumbles upon all of her father’s old film paraphernalia, he realizes who Alice and her mom really are. Alice’s mother, fascinated by these young aspiring artists, invites them to stay for breakfast and then indefinitely. Alice reluctantly accepts to be the hostess of these newly homeless, starving artists. Thus begins a series of comical and romantic adventures and entanglements.

HOME AGAIN is written and directed by Hallie Myers-Shyer. She’s the daughter of Producer Nancy Meyers, who directed the very successful, MOVIEGUIDE® Award winning movies WHAT WOMEN WANT and the 1998 remake of THE PARENT TRAP, and Charles Shyer, the director of FATHER OF THE BRIDE, the 1991 remake of the Vincente Minnelli movie starring Spencer Tracy, and its 1995 sequel FATHER OF THE BRIDE II.

Sadly, however, HOME AGAIN isn’t as family-friendly as those four movies, including the more adult-oriented WHAT WOMEN WANT. Although it definitely has some heartwarming moments between the mother and her daughters and laughs throughout, HOME AGAIN portrays some dysfunctional family values. Much of the humor and situations are for a more mature audience. Worse, the movie’s godless worldview is strongly Romantic. Thus, the characters pursue their personal dreams and happiness apart from God and without any objective moral standards, much less any strong biblical standards. Consequently, HOME AGAIN contains a high amount of questionable content, including multiple examples of infidelity by multiple characters. Sometimes the movie portrays its adult situations as an internal struggle, but they’re also often passed off as something that just “happens” and not an actual decision that was made by a person capable of choosing to do the right thing.