"Back to the Days of Christopher Robin and Pooh" 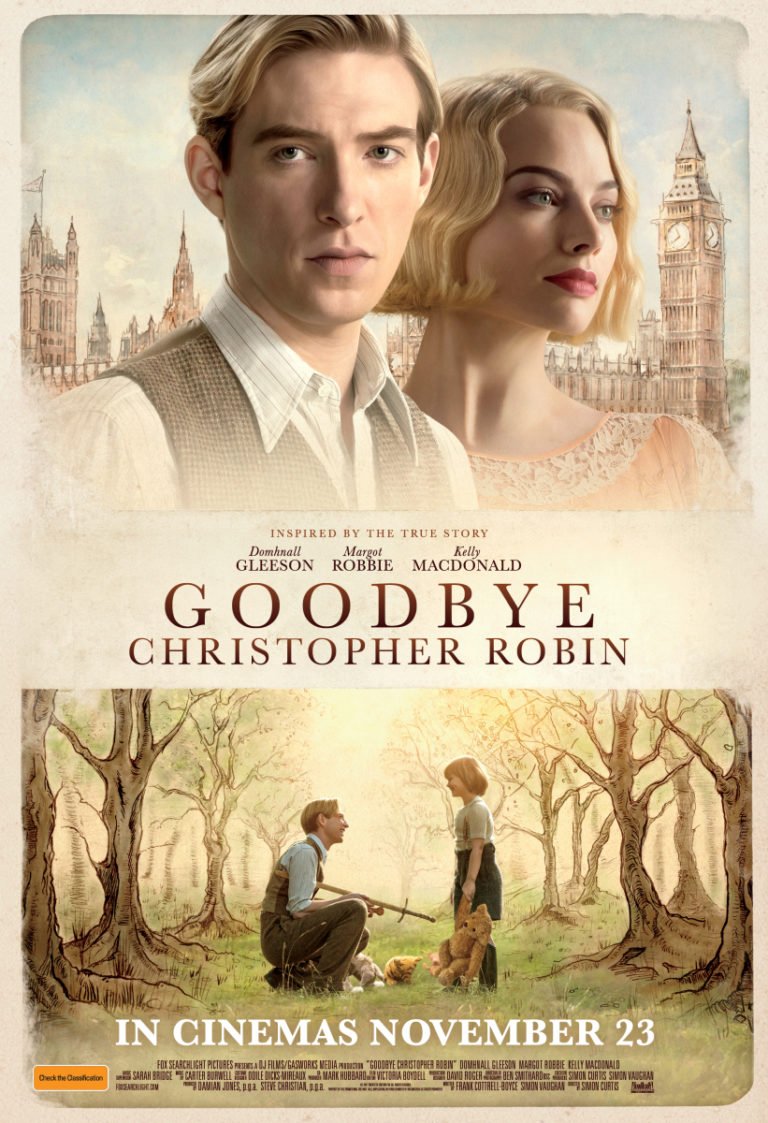 GOODBYE CHRISTOPHER ROBIN follows the writings of A.A. Milne from their inception. When Milne and his wife, Daphne, have a child, their life changes. They name their son Christopher Robin. Christopher has a wonderful Christian nanny named Olive, who takes care of him while his mother is a socialite. Daphne tells Milne that she’s leaving the family for a while so Milne can write a book about his experiences in World War I. Christopher asks for his own book. Milne starts to write about the adventures of Christopher and his stuffed animal friends, including Winnie the Pooh.

GOODBYE CHRISTOPHER ROBIN is well made. Young Will Tilston delivers an excellent performance as Christopher Robin. The time period, including the costuming and production design, is accurate. Although this is the case, the movie needs more heartfelt moments. GOODBYE CHRISTOPHER ROBIN has a mixed worldview. The most positive character is the nanny, who’s a Christian and becomes a spiritual guide for Christopher Robin. Otherwise, however, the family is dysfunctional, with a wife who appears as if she would rather be a socialite then a mother.

(BB, CC, Pa, L, V, A) Strong moral worldview where father establishes a strong bond with his son through storytelling, with a very positive Christian character, prayers said at night and before eating, forgiveness, and references to the Cross, but with a dysfunctional family portrayed showing parents need to be present for their children to grow up; two light obscenities; war violence and traumatic war PTSD, women in labor and screaming; no sexual content; no nudity; light drinking; no smoking nor drug use; and, nothing else objectionable.

When A.A. Milne and his wife, Daphne, decide to have a child, their life changed. They decide to name the child Christopher Robin, but he goes by Billy. Billy grows up with a kind nanny named Olive, who loves and cares for him, while his mother Daphne is being a socialite.

Ever since serving in World War I, A.A., who they call Blue, has PTSD and decides to write a book on the evils of war. However, Blue can’t get his thoughts on paper and develops writer’s block. So, he decides to move the family to the countryside, where he can think and write and not be disturbed or triggered by his PTSD.

Not long after they arrive in the countryside, Daphne decides to leave Blue and Billy so she can go into town and attend events and parties. However, she claims that it’s so Blue can focus on his writing. At the same time, Billy’s nanny Olive has to leave as well to go see her sickly mother. Blue and Billy are all by themselves, which leads them to grow in their relationship. The two take hikes and long walks and start to pretend that Billy’s teddy bear is in his own world, with his donkey friend, little pig friend and more creatures.

Billy asks Blue to write a book for him, so he can read it. Blue gets the idea to write the book about Christopher Robin, Winnie the Pooh and his friends. The two get immersed in the Hundred Acre Woods world and grow into an even deeper bond. Blue decides to invite his friend Ernest, who’s an illustrator, to come up to the countryside and help develop the book with him. Once Daphne has heard that Blue and Earnest are making headway, she decides to return back to the countryside with the family.

After the book is finished, there is an outstanding amount of praise and love for it, so much so that Christopher Robin is overwhelmed by the fans. Will Billy, aka Christopher Robin, be able to get through this much fame?

GOODBYE CHRISTOPHER ROBIN is a well-made movie. Young Will Tilston, who plays Christopher Robin as a boy, does an excellent job. The time period, including the costuming and look, is spot on. Although this is the case, the movie lacks the kind of uplifting sentimentality that is hard to pinpoint, in other similar movies, such as FINDING WONDERLAND or SAVING MR BANKS. Also in this movie, there are multiple plot lines, including one about a bad mother figure, one about the evils of war, one about growing up famous, and a few other minor subplots. These plotlines detract from the basic story.

GOODBYE CHRISTOPHER ROBIN has a mixed worldview. The most positive character in the movie is the nanny, Olive, who’s a devout Christian and serves as a spiritual guide for Christopher Robin. While this is the case, the family is seen as dysfunctional, with a mother who appears as if she would rather be a socialite then a mother. The mother and father leave their son at home for extended time periods except for when Christopher Robin is making them money via a press tour for the book or while his father writes the book. In the end, this is forgiven, but it does show a negative portrayal of motherhood and parenting. There’s also a theme about success ultimately leading to unhappiness. Maybe this is a British theme, but it might strike media-wise viewers, especially Americans, as overdone.