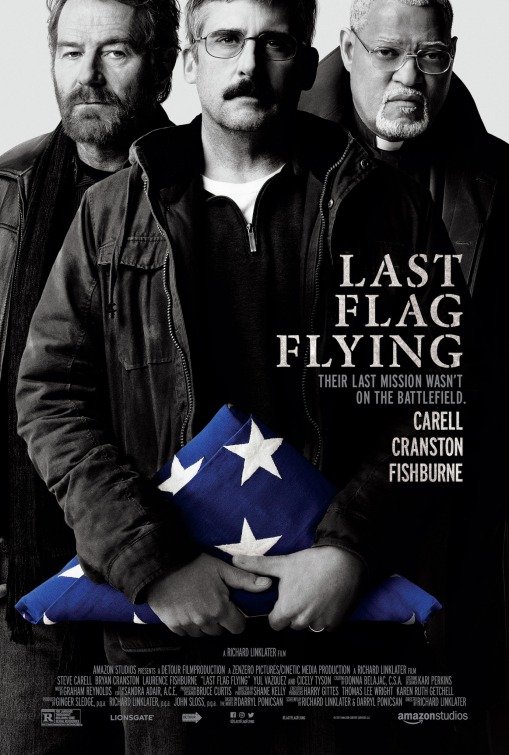 LAST FLAG FLYING is a comical drama about three military vets who go on a road trip to assist one of their fellow comrades as he takes his son’s body home after he was killed in Iraq. Doc, played by Steve Carell, lost both his wife and son in the same year. So, he reunites with the old buddies whom he hasn’t seen in decades: the foul-mouthed drunk Sal; and, Mueller, a former deviant who’s now a preacher. The three men take a road trip together, trying to make sense of the pain and guilt from their time in the Vietnam War.

LAST FLAG FLYING is very stirring and emotionally evocative. The three very different men try to rekindle a friendship founded on some very tough times. The movie ends on a very positive, patriotic, uplifting note. Mueller’s character adds a positive spiritual component to the movie, by frequently praying, reading his Bible, or just speaking truth to his comrades. However, while LAST FLAG STANDING has some positive Christian, patriotic content, the foul language is frequent; so, extreme caution is advised.

(BB, CC, PP, LLL, S, AA, DD, M) Strong moral message about helping friends and fatherhood, with strong Christian content as one character is a pastor who preaches, prays, reads his Bible, quotes Scripture, and speaks spiritual wisdom, and patriotic storyline begins with veterans being negative against the government and military, but ends with the characters honoring the duty of being a soldier, and those who sacrifice their lives for the country; more than 100 obscenities (including at least 63 “f” words), 16 profanities (including many strong uses of Jesus’s name), and obscene gestures and urination; no violence; man jokes, “he likes d***”, characters talk about sleeping with prostitutes, and losing their virginity, one soldier brags that he lost his virginity at the age of 13; no nudity; one character is an alcoholic and is frequently drinking; no drug use, but some drug references; and. Christian preacher cusses sometimes and is racially profiled by Homeland Security.

LAST FLAG FLYING is a comical drama about three military vets who go on a road trip to assist one of their fellow comrades as he takes his son’s body home after he was killed in Iraq.

Set in 2003, Larry “Doc” Shepherd (Steve Carell) arrives at Sal Nealon’s (Bryan Cranston) bar. Doc and Sal served together in the Vietnam war, but haven’t seen each other in decades. Doc is very quiet and soft spoken, while Sal is a foul-mouthed drunkard. Doc hangs out with Sal for a bit at the bar, catching up, and then asks Sal if he’ll drive him somewhere so he can show Sal something. The two men drive to a church, and inside the pastor is Mueller (Laurence Fishburne), the third comrade of theirs from the Vietnam war. Mueller, who was a deviant while in the service, found Jesus, and is now completely different.

Doc reveals to Mueller and Sal that his son was killed in combat in Iraq, and that the military is sending his body back to be buried in Arlington. Doc, whose wife is also dead, would like his two old war buddies to accompany him. Mueller, who has a badly injured knee from the war, is reluctant, but his wife convinces him to go with the men.

Mueller can hardly stand Sal’s irreverent attitude and tries multiple times to find the easy way out of the situation he’s found himself facing with these men. When they go to pick up the body, Doc learns that the military lied to him about his son dying in combat, that his son actually was ambushed by terrorists when he was simply picking up a soda at a gas station. Doc grows angry with the government and tells the Colonel in charge that he won’t have his son buried at Arlington, and instead will bury his son in his graduation gown at home in New Hampshire.

After a few missteps for transferring the body, Doc, Mueller and Sal head for New Hampshire with the body by train. The Colonel sends a young Marine, who served with Doc’s son and was his best friend, to help and ultimately make sure that the soldier is buried in his military uniform. Along the way, viewers learn that the three men feel guilty about a situation that happened when they were in Vietnam when they abused their platoon’s morphine, and used it all up when another soldier who was dying was in need of it.

LAST FLAG FLYING is very stirring and emotionally evocative. The three very different men try to rekindle a friendship that was founded on some very tough times. They also struggle with the tension of honoring fallen soldiers, and their frustration with the government and the wars that gets so many young men killed. By the end, however, the movie ends on a very positive, patriotic and uplifting note.

The character of Mueller adds a positive spiritual component to the movie, frequently praying, reading his Bible or just speaking truth to his comrades. He also gives his testimony as to how Jesus changed his life. Sadly, at one point Sal gets so under his skin that Mueller goes on a cursing spree. So, while LAST FLAG STANDING has some positive Christian and patriotic content, MOVIEGUIDE® must advise extreme caution.