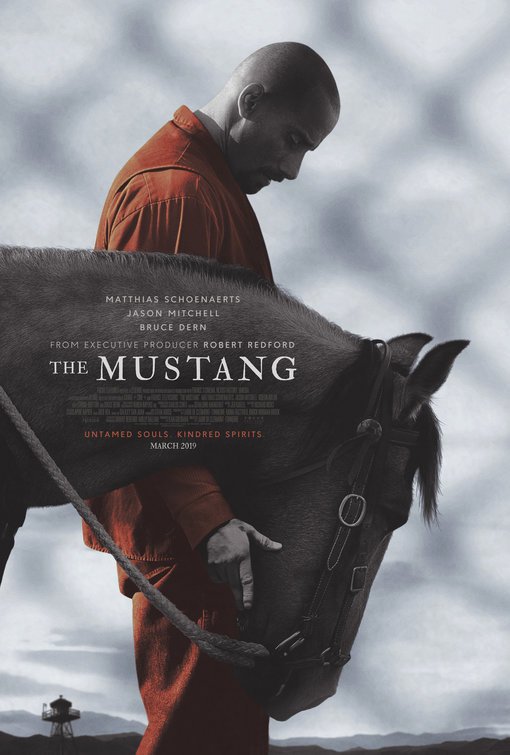 THE MUSTANG follows a man named Coleman who’s been in prison for the past six years, serving time for a rash act done out of anger. When he’s assigned to shovel manure in the prison rehabilitation program, a wild mustang peaks his interest. Men accepted into the program are able to train a horse and show it for auction. When Coleman’s accepted into this program, he’s assigned the untamable horse. During this time, he learns a lot about himself by looking through the eyes of this wild animal.

This movie is a soft look into the lives of the men in prison, showing that no one is past redemption. Coleman subconsciously sees a lot of himself in this wild mustang, and he’s able to confront things that have been holding him back after training with this horse. The story is very nicely done, with compelling characters that create empathy for viewers. However, the moral, redemptive worldview in THE MUSTANG is marred by lots of strong foul language, some intense violence, and references to the drug culture within the prison. Extreme caution is advised.

(BB, C, LLL, VVV, S, N, DD, MM):
Dominant Worldview and Other Worldview Content/Elements:
Strong moral worldview with light themes of redemption and forgiveness for oneself and others, although there is nothing pointing to God or a higher power providing that redemption, the main character learns about himself through training a horse and finds it in him to apologize to his daughter and to show her how much he really loves her, which is something he didn’t do before
Foul Language:
At least 65 obscenities (about half are “f” words), nearly 15 strong and light profanities, one example of crude name calling, man is shown urinating twice
Violence:
Some very strong and strong violence such as man gets angry at horse and begins violently punching it before he is stopped by others, there is mention of what a man did to his daughter’s mother that put her in a vegetative state, man stabs another man in a prison yard with a shank of sorts in the throat with a moderate amount of blood, man chokes cellmate with bare hands, man is bucked off a horse and then dragged, and horse hits man in the head, knocking him out with a substantial amount of blood
Sex:
Implied fornication as a younger girl is pregnant and mentions she has a boyfriend
Nudity:
Upper male nudity shown multiple times as it is an all-male prison, men are shown shirtless playing basketball as well as taking a shower in shorts, man is shown sitting in bed in his underwear, there are blurred Sports Illustrated type pictures of women on a man’s wall blurred in the background
Alcohol Use:
No alcohol use
Smoking and/or Drug Use and Abuse:
Drugs are dealt throughout the movie within the prison, small scenes throughout of small bags being passed from hand to hand or from cell to cell, man is blackmailed, and his daughter threatened into stealing ketamine from horse’s medical supply, and the other man is shown doing ketamine on a few occasions;
Miscellaneous Immorality:
Strong miscellaneous immorality includes elements of family dysfunction as man is in jail and doesn’t want to see his daughter, the daughter resents her father for what he did to her mom and missing her life by being in jail, light elements of racism as people in the jail obviously segregate, a white man calls a black man “boy,” examples of blackmail, man threatens the safety of someone’s family if they don’t do what he wants, and some moral relativism.

THE MUSTANG follows Roman Coleman who has been in prison now for around six years, serving time for a violent act that he committed during a momentary rage long ago. However, his anger issues have not improved while spending time behind bars. Instead, he prefers to be alone, telling himself and his counselor that he just isn’t good with other people. Determined to make some progress with Coleman, his counselor puts him on a new work assignment that will force him out of his unprogressive comfort zone. Despite his protests, he is soon outside with a shovel and wheelbarrow, moving horse manure from place to place. He watches the other men in their denim garb, cowboy hats and boots working with the horses.

One day, Coleman hears loud banging from inside of an enclosure. The cage has been blocked from the bottom up with large wooden planks, and something inside is angrily banging on the door to be free. Coleman peaks inside a small opening to see a raging mad mustang staring back at him. When he opens the door, the head of the program, Myles, immediately scolds him, telling him how dangerous that could have been for him and everyone else.

Soon, Coleman is accepted into the mustang training program, being assigned right away to the wild mustang that he almost set free earlier. Henry, an inmate who has been training horses for a while now, takes Coleman under his wing, teaching him how to not let the horse to control him. Henry prides himself in being the best trainer in the program and shows off his skills regularly. However, Coleman is still dealing with repressed anger and doesn’t know how to deal with it. In frustration, he takes it out on his horse, getting him quickly kicked out from the program. The small amount of progress he has made recedes, and he snaps back into the bitter man he was.

Suddenly, a storm begins to rage in the Nevada desert, and the horses are going mad outside. Coleman is summoned from his cell to help out amidst the chaos. The next day, Myles extends his good graces and allows Coleman back into the mustang training program. Coleman is now determined to train his horse right and get him ready for the auction. Excited about his new goals, he tells his daughter when she comes to visit and invites her to see him ride his mustang in the auction. During this visit, his daughter becomes vulnerable, expressing how much he hurt her, and she doesn’t think that a few weeks with a horse will change anything. However, Coleman’s heart has been softened, and he wants nothing more than to have her love and forgiveness. He has to prove to himself, and those he loves, that he’s a changed man, and that he can now live a life for the better.

THE MUSTANG is very well done, with a quietness to the emotions of characters, easily creating empathy and curiosity within viewers. It’s a fascinating story based on a real program that has helped many, many people in prisons all over the US. The performances by all the actors are beautifully done, helping to create the world where their characters reside. This movie serves as an example of a symbiotic relationship between man and nature. The horses are a therapeutic way where these prison inmates can internally seek forgiveness and redemption. There is no mention of God or any other higher power that provides the forgiveness and redemption, however, although it’s a major theme.

THE MUSTANG does contain lots of strong foul language, some intense violence, and references to the drug culture within the prison. Consequently, MOVIEGUIDE® advises extreme caution.