"Looking at HAMLET from a Different Perspective" 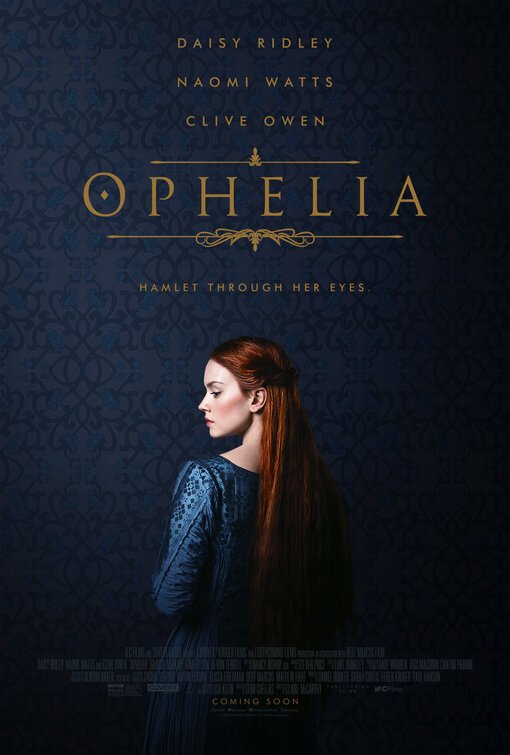 OPHELIA takes a more personal approach to the tragic Shakespearian tale of Hamlet, showing the story from the perspective of the handmaid who lacks a noble birth. Ophelia has been taken in by the favor of the Queen, leaving her to be bullied by the more aristocratic handmaids. However, the Queen’s son, Hamlet, has taken to Ophelia, and although his father would never allow it, he can’t help but want her more than anything. However, when the betrayal by the King’s brother Claudius becomes apparent, Hamlet seems to be losing his mind, seeking nothing but to avenge his murdered father.

OPEHLIA is done with the highest production values, taking classic literature and turning it into a piece of visually stimulating work. While Shakespeare is rarely done anymore in its true form, OPHELIA takes a fresh new look into the story that’s been many times told. However, there are some negative elements to this story, including some Romantic elements and a substantial amount of violence. Although OPHELIA contains some strong Christian themes and references, MOVIEGUIDE® advises extreme caution for the movie’s objectionable content.

(RoRo, CC, BB, VVV, SS, N, A, D, MM):
Dominant Worldview and Other Worldview Content/Elements:
Strong Romantic worldview as the characters pursue their love of one another beyond the law or anyone else’s wishes, Hamlet and Ophelia allow their personal feelings to govern their behavior, but with some strong Christian, moral elements such as references to a “book of devotion,” Hamlet spends time praying and meditating on his actions in a church resembling a Roman Catholic church, characters also run off to marry because it is the Holy thing to do as much as they desire each other, Ophelia’s brother tells her that the answers about truth and love are found in science, but she doesn’t believe that, there is a character who’s been labeled a witch by the “bad guys” but in reality uses herbs, etc., for medical treatment, as well as possesses the knowledge for different poisons
Foul Language:
No foul language
Violence:
Heavy amount of blood and violence including multiple sword duels, young man gets a facial cut from a fight, multiple examples of poisoning, a man is killed accidentally shown on the ground with blood pouring from his head, two handmaids tussle after an argument, a man chokes and threatens a young woman, a woman kicks a man in the genitals and hits him in the head with a torch, a man is stabbed fully through his body with a sword with a moderate amount of blood, one graphic battle scene with a heavy amount of blood, death and women are attacked in the act of an ambush of war
Sex:
One slightly explicit sex scene after a couple get married but tastefully done without any explicit nudity and within the bounds of marriage, a woman comments that she became pregnant by a man who promised to marry her but didn’t fulfill his promise to her
Nudity:
Upper male nudity, and a woman’s topless back in shown once in a sexual scene and once when changing clothes
Alcohol Use:
Characters have wine on occasion with a meal or at a festival, no apparent drunkenness
Smoking and/or Drug Use and Abuse:
No smoking or direct drug use, the Queen takes a potion that makes her feel better and is clearly addicted to whatever this concoction is, asking for it as soon as she is out; and,
Miscellaneous Immorality:
Moderate amount of miscellaneous content, strong examples of dysfunctional marriage as well as infidelity, major themes of revenge, a man speaks ill of his mother, and examples of bullying and name calling such as “whore.”

OPHELIA is based on a novel written by Lisa Klein, who decided to take an unexpected approach to the well-known story of Hamlet originally created by the brilliant mind of William Shakespeare. This point of view is from the far from noble handmaid, Ophelia, who is taken under the wing of the Queen, who quickly favors her from the time she is a child. Ophelia quickly grows into a beautiful and headstrong young woman, with flowing red hair, who catches the attention of the prince, Hamlet.

As Ophelia learns the ways of how the people in power plot and seek power, she keeps a good head on her shoulders, not allowing any taste of these things faze her. The Queen soon entrusts her to go on a secret mission to a hidden place outside of the castle to retrieve a potion from a woman that the Queen feels she needs to feel good. The woman who lives outside of society is revealed to be the Queen’s sister who was ostracized and accused of being a witch.

More and more it comes to be known that the brother of the King craves the pure power of beholding the crown, as well as the hand of his brother’s beautiful wife, Gertrude. Suddenly, the King dies of an apparent snake bite, but not everyone is convinced of this story. Ophelia happens to see a hooded man leaving the cave of the “witch” and then finds a bottle of poison in the cloak of the new King.

However, Ophelia and Hamlet have snuck away to the countryside to marry, unknown to anyone, family and friends. However, now that Hamlet’s uncle has been shown to be a traitor to his brother and the kingdom, Hamlet is determined to bring him to justice. The situation seems to point to an apparent madness by Hamlet and Ophelia. Their love doesn’t grow weary, but it’s becoming more and more difficult to survive. As war is brewing from a neighboring kingdom, Ophelia has to quickly devise a plan to save herself, try to save her marriage with Hamlet, and help Hamlet avenge his father.

OPHELIA is a fresh and entertaining take on the many times told Shakespeare tale of Hamlet. Clocking in at almost two hours, the viewer doesn’t feel any type of lull in the story, being entertained from beginning to end. After a quick jump to stardom in the new STAR WARS trilogy, Daisy Ridley doesn’t disappoint starring opposite veteran actor Naomi Watts as the Queen, rising to the level that’s needed for the appropriate performance. There are some religious and redemptive elements, with Hamlet showing his Christian faith, and the betrayal of the protagonists is portrayed as vastly wrong, making the traitors the obvious villains. However, Hamlet and Ophelia let their personal feelings govern their behavior, so the movie’s Christian and moral elements are overshadowed by their feelings. OPHELIA also has a substantial amount of blood and violence that can be disturbing for more sensitive viewers. So, MOVIEGUIDE® advises extreme caution for OPHELIA.