"Wild Police Thriller Marred by Too Much Obscenity" 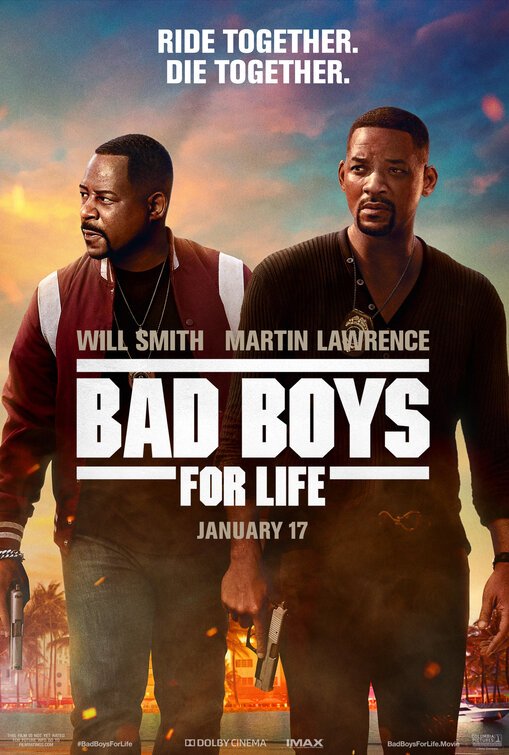 In BAD BOYS FOR LIFE, Will Smith and Martin Lawrence reprise their roles as two Miami police detectives. This time, Smith’s character, Mike, is shot by the son of a drug dealer’s wife who escapes from the Mexican prison where Mike helped put her years ago. A member of a Mexican death cult, Isabel instructs her son from her Mexican hideout. Mike, who doesn’t know the would-be killer’s identity, barely survives the murder attempt. Six months later, he tries to convince Martin Lawrence’s character, Marcus, to come out of retirement and help him catch the killer, who’s murdered a judge and two policemen. Can Mike convince Marcus to change his mind?

BAD BOYS FOR LIFE has lots of explosive action and humor. The story also contains some nicely written personal drama, which leads to several rewarding twists. Even better, the movie has strong Christian, moral content and references, including prayer and warnings about Hell. Despite this, BAD BOYS FOR LIFE is heavily marred by constant, excessive foul language, extreme bloody violence with lots of wild gunfights, and strong lewd comments intended for laughs.

(Pa, CC, BB, PPP, LLL, VVV, SS, N, A, DD, M):
Dominant Worldview and Other Worldview Content/Elements:
Light mixed pagan worldview with strong Christian, moral elements (positive references to prayer, man warns his friend about going to Hell and it becomes a metaphorical image at the end, a positive view of marriage and having children, and story becomes a fight of good versus demonic evil), and a very supportive attitude toward the American men and women risking their lives while working in police enforcement and fighting criminals who are often vicious, but marred by frequent intense violence, constant foul language and some strong lewd comments intended for laughs, and one main character prays and warns about going to Hell, but the other main character s a skeptical non-believer
Foul Language:
At least 187 obscenities (including 50 or more “f” words), two strong profanities and two light profanities
Violence:
Frequent intense violence with some blood includes extreme bloody violence, many wild gunfights with bullets flying (includes machine guns), some point blank gunshots and headshots with some quick blood sprays, man is shot in stomach and blood starts pooling, but he eventually lives, multiple explosions, several car or motorcycle chases, the roof of a small car is smashed when a dead body falls from a roof and hits it, two men fight hand to hand in one scene, and one man is sown with wounds on his head from the fight, another fight occurs when two cops try to interrogate a criminal accountant in his messy apartment, several people are shot and killed by a sniper, female convict stabs a guard and then slits his throat, villain impaled by falling glass shard, helicopter crashes and explodes when the pilot is shot dead during a gunfight, ceiling fan comes apart and hits a TV, long distance shot of a car on a garage lift falling and crushing a man
Sex:
Several strong lewd comments about sex using an “f” word, a main character’s unmarried daughter has a baby, but she and the father (who is a member of the Armed Forces) get married at the end of the movie, and a comical question is asked about a middle aged man using “blue pills” or Viagra
Nudity:
Upper male nudity, some female cleavage, women dressed in bikinis
Alcohol Use:
Brief alcohol use
Smoking and/or Drug Use and Abuse:
No smoking but bad guys are drug dealers and one scene shows a man quickly snorting cocaine before two cops enter his apartment to interrogate him; and,
Miscellaneous Immorality:
Some miscellaneous immorality, but mostly rebuked, such as revenge, criminal activity, and female villain is a witch in a Mexican death cult and she has an altar to Death, but her beliefs are not endorsed or detailed and she gets her just deserts at the end in a very appropriate way.

In BAD BOYS FOR LIFE, Will Smith and Martin Lawrence reprise their roles as two Miami police detective fighting criminals. This time Will Smith’s character, Mike, almost gets killed by the son of a dead drug dealer’s wife who escapes the Mexican prison where Mike helped put her years ago. A member of a Mexican death cult, Isabel instructs her son from her hideout in Mexico City. She wants her son to target Mike for the maximum pain before he kills him, but her son jumps the gun and tries to shoot down Mike as soon as the son gets to Miami.

Mike, who doesn’t know the would-be killer’s identity, barely survives the murder attempt. Six months later, Mike tries to convince Martin Lawrence’s character, Marcus, to come out of retirement and help him catch the killer, who’s also murdered a judge and another policeman in the meantime. Marcus refuses, even when the killer strikes closer to home.

Can Mike convince Marcus to change his mind?

BAD BOYS FOR LIFE has lots of explosive action and lively humor, but it also has constant foul language and nonstop, often intense and sometimes bloody violence. However, the story contains some nicely written personal drama. Marcus, whose daughter just gave birth, wonders why Mike refuses to settle down with a woman and start his own family. Apparently, Mike at one time had a relationship with the female detective heading the team investigating the murder of the judge and the attempt on Mike’s life, but he broke it off. Mike keeps avoiding the question of why he won’t settle down. However, when he and Marcus learn that Isabel and her son are behind the murders and Mike’s attempted murder, Mike reveals some secrets about his past before he knew Marcus. He reveals that he was the undercover cop who helped put Isabel in jail more than 20 years ago and killed her husband, who was a make drug dealer in Mexico. This revelation leads to some rewarding plot twists.

Surprisingly, BAD BOYS FOR LIFE has some positive Christian references. For example, when Mike’s in surgery fighting for his life after being shot, Marcus goes to the hospital chapel and asks God to let his friend live. He promises God to stop using violence, and it’s one of the reasons behind his increased desire to retire from the police force. His promise leads to some funny moments later in the movie when it becomes clear that Isabel isn’t going to stop carrying out her ruthless desire for revenge. In fact, as the story plays out, Mike also reveals that Isabel is actually a witch in a Mexican death cult. So, eventually, the plot becomes a story of good versus demonic evil. At another point in the movie, Marcus warns Mike about going to Hell if he doesn’t change his ways. This dialogue about Hell is turned into a potent visual metaphor at the movie’s end.

Despite all the good in BAD BOYS FOR LIFE, the movie is filled with constant R-rated foul language, some extreme bloody violence with many intense gunfights and several strong lewd comments intended for laughs. All this objectionable content crosses the line. See the CONTENT section for more details.