TO ALL THE BOYS: P.S. I STILL LOVE YOU 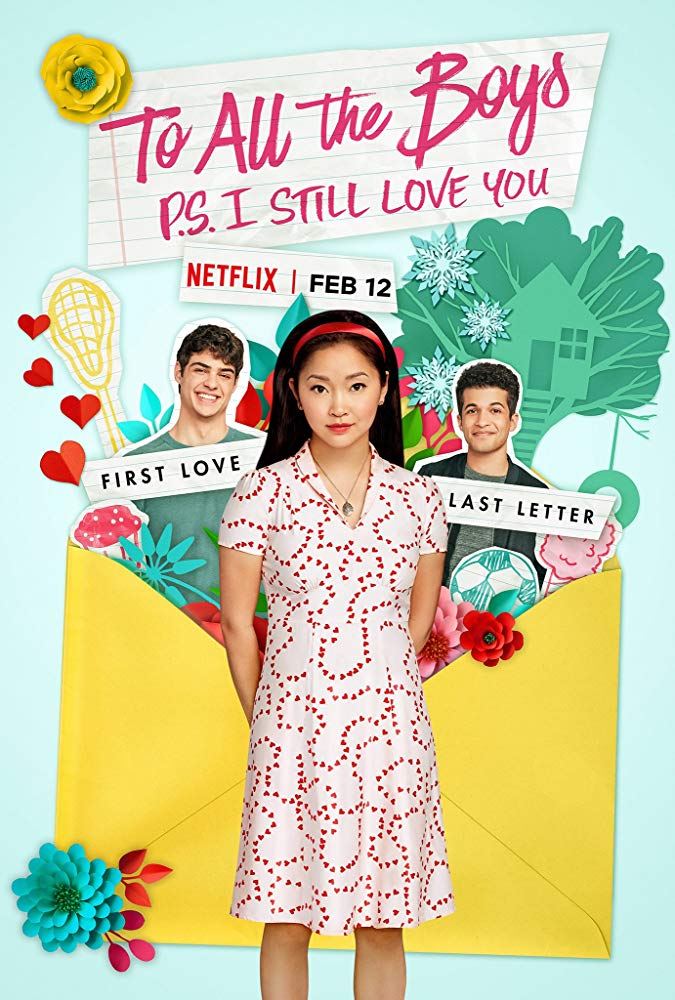 TO ALL THE BOYS: P.S. I STILL LOVE YOU, a sequel, starts off where the first movie ended. Lara Jean and Peter have just made their fake relationship real, and Peter takes Lara Jean on her first date. However, one of the boys Lara Jean accidentally sent a childhood love letter to enters the picture and confuses Lara Jean about her feelings. Lara Jean is already struggling with insecurities in her new relationship with Peter, which could be their downfall.

TO ALL THE BOYS: P.S. I STILL LOVE YOU is a satisfying sequel. It captures the real emotions of a teenage girl who doesn’t know exactly what she’s doing. Ultimately, however, the new love triangle takes away from her chemistry with the first man. On the positive side, family is very important to the characters. Also, two characters volunteer at a retirement home. On the negative side, the movie has some emotional elements involving a love triangle. It also contains some foul language and references to a same-sex couple. So, MOVIEGUIDE® advises strong caution for P.S. I STILL LOVE YOU.

(Pa, Ro, BB, PC, Ho, Fe, LL, V, S, A, M):
Dominant Worldview and Other Worldview Content/Elements:
Light mixed pagan worldview with some Romantic elements mixed with strong moral content where teenagers have a love triangle and make emotional decisions, teenage girl has her first boyfriend, family is very important as are heritage and tradition, serving others is exalted when two teenagers spend their weekends volunteering at a retirement home, and truth and honesty overcome jealousy, misunderstanding and division, plus some politically correct elements include homosexual references where a same-sex gay couple is seen being serenaded on Valentine’s Day, and one of lead female character’s friends is homosexual, and feminist content where a girl wears a “feminist” necklace throughout movie
Foul Language:
Six obscenities, eight light profanities (mostly OMG), woman tells someone to “suck it,” and woman jokingly refers to other people as communists
Violence:
Brief comic violence includes girl brings shovel to dig something up and playfully moves it toward another person, and a snowball is thrown at someone playfully
Sex:
Boy kissing girl starts to unbutton her shirt, but she quickly stops him, a conversation about knowing how to please yourself before you let someone else do it, and some other brief kssing
Nudity:
No nudity
Alcohol Use:
Alcohol use by adults, one instance of a teenager at a party where solo cups are, but it’s not known if the teenagers are drinking alcohol, and an older character jokingly offers teenage girl a drink
Smoking and/or Drug Use and Abuse:
No smoking or drugs; and,
Miscellaneous Immorality:
Lead character dates someone while thinking about someone else, and one character shows signs of envy and jealousy towards another character, but it’s resolved positively.

The movie begins with Lara Jean getting ready for her first real date with her new boyfriend Peter Kavinsky. Their date goes as well as either of them could’ve planned, and Lara Jean is happy with how things worked out with Peter.

The following day Lara Jean, her sister Kitty, and their father, Dr. Covey, are going to visit Lara Jean’s late mother’s side of the family to celebrate Korean New Year. Keeping his daughters in tune with his wife’s heritage is important to Dr. Covey so they know their ancestry.

Upon returning home, Dr. Covey hands Lara Jean a letter she received in the mail that just happens to be an answer to one of her love letters. John Ambrose’s letter recalls how he didn’t think anyone liked him in middle school, and he’s perplexed as to why she just now was telling him. Lara Jean isn’t sure if she should write back, so she sleeps on it and decides to tell Peter about the letter.

The next day at school, Lara Jean has the chance to talk to Peter, but he was cool about the letter John Ambrose sent. They enter the cafeteria where the students are having signups for where they will spend their weekends volunteering. Lara Jean signs up for a retirement home called Belleview, where her sister Margot volunteered. Lara Jean is excited to meet one lady about whom Margot raved.

When Lara Jean shows up for her first day of volunteering, she meets the woman Margot loved, Stormy, and they quickly form a friendship. When she is left alone with the volunteer coordinator, the only other volunteer who signed up shows up. The other volunteer is none other than John, who’s volunteering through his high school. The two hit it off, and it seems they both might have feelings for one another.

Through a series of small fights, Lara Jean and Peter end up hitting a breaking point. Lara Jean is very insecure about Peter’s past with Gen and the fact that the two of them still talk. Peter is upset Lara Jean didn’t tell John Ambrose about their relationship, until Peter mentioned it in front of him. These things make the two of them break up, even though the audience can tell neither of them wants that to happen.

Lara Jean decides to talk it out with Gen to find out what’s going on between her and Peter. Gen tells her Peter is crazy about Lara Jean, and no longer has any feelings for her. Lara Jean realizes maybe she was too hard on him, but is it too late?

TO ALL THE BOYS: P.S. I STILL LOVE YOU is a satisfying sequel that captures the real emotions of a girl who doesn’t know exactly what she’s doing in a relationship. This relatability could sit well with viewers who’ve in her shoes. Ultimately, however, the new love triangle takes away from the chemistry of Lara Jean and Peter. While the storyline of a girl with conflicted emotions is believable, the chemistry isn’t quite there between Lara Jean and John Ambrose. The audience is left wanting more of Lara Jean and Peter’s relationship instead of getting caught up in the love triangle.

On the positive side, family is very important to the characters, and two characters volunteer at a retirement home. Also, truth, honesty and love overcome jealousy, misunderstanding and division. On the negative side, the movie has some emotional elements involving a love triangle. The lead female character deals with new feelings and tries to figure out where her real feelings lie. The movie also has some foul language and references to a same-sex couple. So, MOVIEGUIDE® advises strong caution for teenagers for TO ALL THE BOYS: P.S. I STILL LOVE YOU.