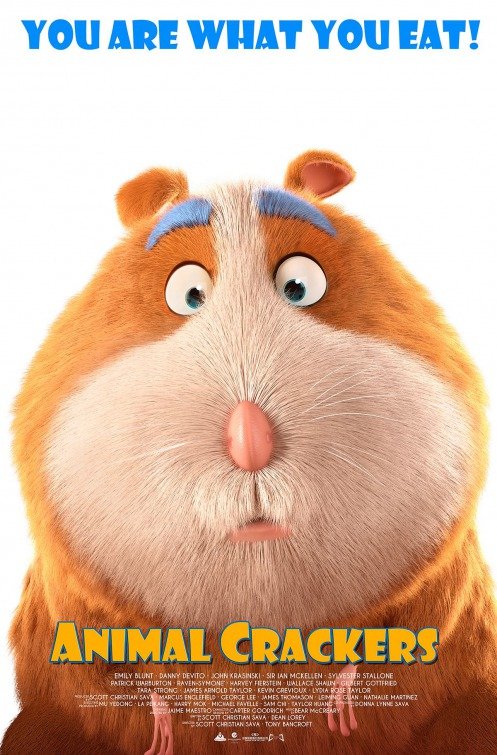 ANIMAL CRACKERS (2020) is an enjoyable, funny animated movie on Netflix. A man named Owen falls in love at his aunt and uncle’s circus. Owen and Zoe always envisioned their lives as circus performers until they got married, and Owen decides to take a “serious” job working for Zoe’s father. The death of Owen’s aunt and uncle brings Owen and Zoe back to the circus. However, Owen discovers that his uncle’s evil brother, Horatio, wants the circus to use it to glorify his own act. A magical box of animal crackers could be the answer to Owen and Zoe’s troubles.

ANIMAL CRACKERS is thoroughly enjoyable. It has a strong moral worldview stressing marriage and staying together as a family. One circus performer is dressed as a devil, but he’s evil. There’s also a fortune teller character, but there’s no stress on any visions she may have, and it’s obvious she really can’t tell the future. MOVIEGUIDE® advises caution for younger children for some slapstick violence in ANIMAL CRACKERS (2020), and when the greed-driven villain makes a comment about him being a god.

(BB, C, Ro, O, Ab, FR, V, N, M):
Dominant Worldview and Other Worldview Content/Elements:
Strong moral worldview stresses staying with your family no matter the odds, marriage, the importance of community, and repentance at the end, with some Romantic elements such as a character says, “I’m going to make my own destiny,” minor magical elements as animals crackers have the ability to turn humans into animals, and there’s a fortune teller character who can’t really tell the future, and a performer is dressed up as a devil but it’s clear imagery that he’s turned to evil, and villain character declares he’s a god
Foul Language:
No foul language, but characters make burping jokes
Violence:
Some slapstick violence such as a character is run over by a car, a character is shot out of a canon, lions chase smaller animals
Sex:
No sexual immorality or lewd content, but a married couple kisses a few times, and a dating couple kisses but then gets engaged shortly after
Nudity:
Upper male nudity in a few scenes
Alcohol Use:
No alcohol
Smoking and/or Drug Use and Abuse:
No smoking or drugs; and,
Miscellaneous Immorality:
Villain displays a desire for fame and fortune despite anyone who gets in his way, some name-calling, and a male clown tells a man, “I’m so happy I could kiss you,” and he does.

ANIMAL CRACKERS (2020) is an enjoyable animated Netflix movie about circus performers who turn into animals by eating magical animal crackers. ANIMAL CRACKERS has a strong moral worldview stressing staying together as a family. MOVIEGUIDE® advises caution for one greed-driven villain who makes a comment about being a god and some slapstick violence.

ANIMAL CRACKERS begins in San Jose, California in 1962 at the Huntington Brothers’ circus. A clown named Chesterfield narrates the scene as viewers learn that Horatio Huntington, one of the circus performers, is into himself and his act too much. On the bright side, the other performers seem to love entertaining as a way of life, not to draw attention to themselves, including Horatio’s brother Buffalo Bob.

Buffalo Bob meets and falls in love with the fortune teller’s niece, Talia. The two get married. This pushes Horatio out of the circus because he doesn’t want to stand by and watch his brother have it all. At the wedding, however, Talia’s aunt gives Buffalo Bob a magic box with something inside.

Bob’s nephew, Owen, is quite taken with the circus. Like his uncle, Owen meets the woman of his dreams, Zoe, at the circus. They get married, but Owen decides to take a “serious” job working for Zoe’s fathers making dog biscuits instead of pursuing his dream to run away with the circus.

Flash-forward seven years, and Zoe and Owen are parents to a daughter. Bob and Talia die. This brings Owen and Zoe back to the circus where they fell in love. All their old friends still keep the magic of their performances alive, but Horatio, now significantly older, takes control of the circus and claims it was his from the beginning. As Owen and Zoe leave the memorial service, an older dog gives Owen the same magical box from the beginning of the movie, but Owen doesn’t know it’s magical.

On the ride home, Zoe steps out of the car for a pit spot while Owen opens the box only to find animal crackers. He takes a bite of a cracker shaped like a hamster but lo and behold, he actually turns into one!

How will these animal crackers help Owen and his family save the circus from the greedy Horatio? Only time will tell.

ANIMAL CRACKERS is funny and enjoyable, and well-cast for an animated movie. Each actor brings a particular nuance to his character, which makes the plot engaging. The only complaint is that it takes a while to get to the plot point where the animal crackers really come into play.

ANIMAL CRACKERS (2020) is thoroughly enjoyable. It has a strong moral worldview stressing marriage and staying together as a family. There is one circus performer who’s dressed as a devil, but it’s clear that he’s evil. Also, there’s a fortune teller character, but there’s no stress on any visions she may have, and it’s obvious she can’t really tell the future. MOVIEGUIDE® advises caution for younger children for some slapstick violence in ANIMAL CRACKERS, and when the greed-driven villain makes a comment about being a god.