THIS IS THE YEAR

"The Best Love is Rooted in Reality" 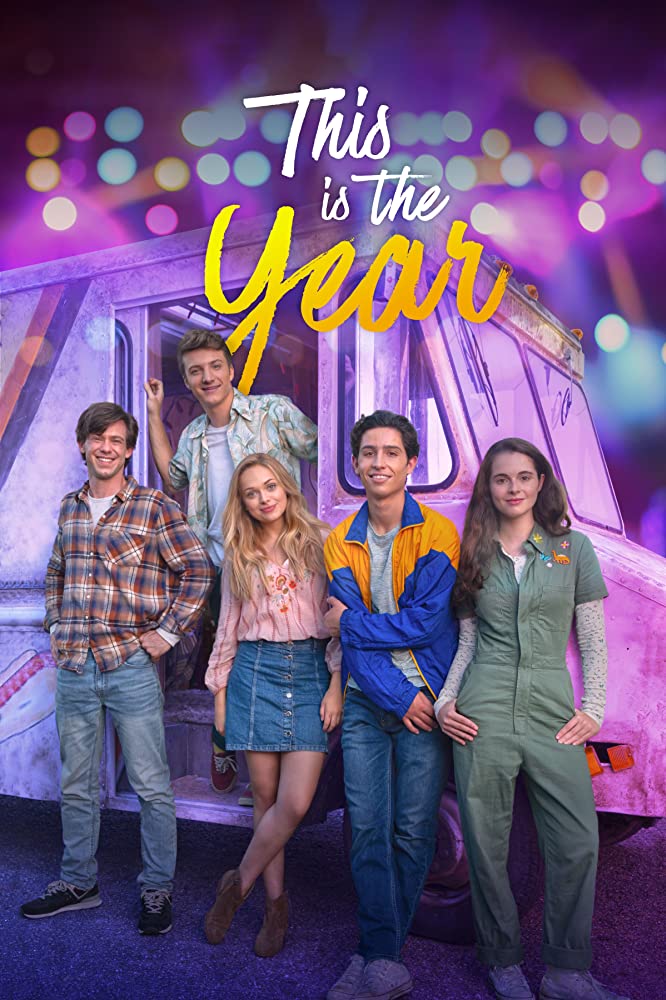 THIS IS THE YEAR is a sweet romantic comedy about a high school senior named Josh. Josh is determined to date the girl of his dreams and finish his high school experience on a high note. There’s one glaring problem for Josh: his crush, Zoey, is about to move to Los Angeles, and he’s never told her how he feels. Josh and his best friend, Molly, hatch a plan to go to a stellar music festival to woo Zoey, but they don’t have tickets. Will things work out the way Josh envisions?

THIS IS THE YEAR is sweet and delightful. The movie’s strong moral worldview concludes that the best love is rooted in reality. It extols brotherly love, friendship and sacrifice. These positive elements are mitigated by some Romantic content about searching for the right romantic partner. Also, one character makes some New Agey references to “vibes” and energy, but he’s an artist, and it’s clear the other characters don’t take him seriously. MOVIEGUIDE® advises caution for older children for such content, brief vulgar language and a vague reference to hooking up.

(BB, C, Ro, Pa, L, V, S, N, A, DD, M):
Dominant Worldview and Other Worldview Content/Elements:
Strong moral, slightly redemptive worldview sends the message that the best love is rooted in reality, brotherly and friendship love are extolled, as is making sacrifices for those you care about, mitigated by some Romantic elements mainly attributed to dreaming of the perfect relationship, plus an artist character showcases some New Age values and says things about “good vibes” and energy, but it’s clear he’s not taken seriously
Foul Language:
Two instances of a**, one OMG profanity and a few vulgar words like “crap,” “sucks” and “heck,” and a painting of a tiger shows a middle finger
Violence:
Dart accidentally hits a man, but it doesn’t cause too much pain
Sex:
No sex, but teenagers say “hook up” but it’s not clear that it means anything more than kissing, teenage couples kiss a few times, girl kisses a friend on the cheek, and a guy kisses his younger brother’s forehead
Nudity:
Quick upper male nudity in one scene, teenage guy jokes about sleeping in the nude to his friend
Alcohol Use:
Adult male gets a bit tipsy at a party with a new friend of his, champagne glasses clink on screen, teenagers drink out of a glass bottle at a VIP party, but it’s not clear that it’s an alcoholic beverage
Smoking and/or Drug Use and Abuse:
It’s said that a character has narcotics in his possession, but it’s not depicted or confirmed; and,
Miscellaneous Immorality:
Lying, but it’s ultimately apologized for and corrected, and a teacher jokes that he hates his students, but it’s clear that it’s a joke.

THIS IS THE YEAR is a sweet romantic comedy from first-time director David Henrie that follows a high school senior who’s determined to date the girl of his dreams and finish out his high school experience on a high note. The movie has a mixed worldview with some Romantic elements but ultimately displays that the best love is rooted in reality. MOVIEGUIDE® advises caution for some alcohol use and a mention of hooking up.

THIS IS THE YEAR begins with a flashback. Young Josh watches a rom-com movie from the 80s where the guy gets the girl in the end. Cut to present day, Josh is about to start his senior year of high and is determined to tell Zoey, his crush, how he feels about her. Josh’s best friend Molly coaches him through what to do as does his guy friend Mickey, who’s actually Zoey’s cousin. However, the months go on and Josh continues to miss every opportunity to tell Zoey about his feelings.

As the school year draws to a close, Zoey tells Josh she’s moving to Los Angeles with her boyfriend, Kale, earlier than graduation. Josh is floored and knows that he has to act quickly. But Josh has another wrench in his grandiose senor year plans. His teacher informs him he missed the due date for his final essay, a 10-page paper about his high school experience. Josh insists he hasn’t had any moment worth writing about yet, but his teacher gives him a new due date anyway.

Later that day, Molly and Josh go to work at the local movie theater and try to call into a radio station to score tickets to a fan-favorite music festival, but it doesn’t pan out. So, Josh and Molly still believe this is the way to get Zoey’s attention. So, they hatch a plan to use Mickey and his brother’s new food truck, the Milleniyum (Star Wars pun intended) Falcon, to go to the music festival anyway and try to get tickets along the way.

Yet, as the motley crew embark on their road trip, Molly and Josh’s lie catches up to them, Kale comes looking for Zoey, and Mickey and his brother get into a fight about their future together as entrepreneurs.

Will Josh now have plenty of material to fill his 10-page essay?

THIS IS THE YEAR is deftly written, with a clear plot and delightful themes from the 1980s-type movies it copies. The actors perform their roles perfectly. Bug Hall of LITTLE RASCALS has a particularly engaging character who’s like one of the teenagers but who’s ultimately a responsible adult. Though slightly predictable, the movie is sweet.

THIS IS THE YEAR has strong moral elements a mixed worldview with some Romantic elements but ultimately displays that the best love is rooted in reality. Positively, brotherly love and friendship are extolled and ultimately come out on top. There’s one character who’s a bit New Agey and makes references to “vibes” and energy, but this fits his character, since he’s an artist, and it’s clear that the other characters don’t take him seriously. MOVIEGUIDE® advises caution for alcohol use and a mention of hooking up.

Watch THIS IS THE YEAR:

Audience: Teens and up