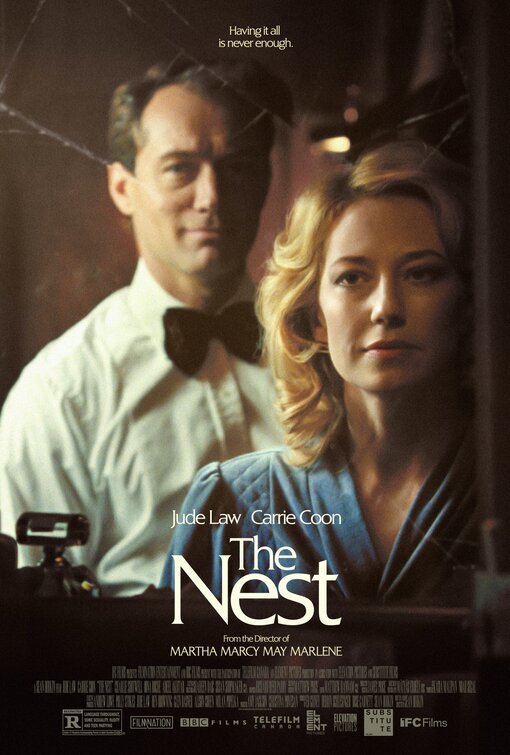 THE NEST follows Rory O’Hara, a greedy, selfish Englishman living in New York who moves his American family into a gigantic mansion outside London. When his wife, Allison, stepdaughter, Sam, and son, Ben arrive, everything seems like will be great for them. However, each family member soon begins a slow but steady downward spiral, and the family starts to fall apart.

THE NEST has an eerie, creepy feel to it. Sadly, the ending is very anticlimactic, with no resolution. That said, Jude Law and Carrie Coon deliver great performances as the married couple. THE NEST has a strong humanist worldview. The husband thinks he deserves all the money and luxury life has to offer because of his poor upbringing. He goes to any lengths to achieve his desires. There’s a couple moral elements supporting family, including a declaration that children and family are more important than being rich. However, the movie also contains lots of foul language, a bedroom scene, brief nudity, some substance abuse, and miscellaneous immorality. Because of the humanist, immoral elements in THE NEST, MOVIEGUIDE® finds the movie unacceptable.

(HH, B, LLL, V, SS, NN, AA, DD, MM):
Dominant Worldview and Other Worldview Content/Elements:
Strong humanist worldview where main character thinks he can give his family the world and that he deserves everything because of his poor upbringing, all the characters try to fix their problems themselves (this pulls them away from each other), but there are some moral elements where the characters realize they only have each other (there’s no resolution, however), and a taxi driver tells the main character that children and family are more important than making a lot of money and being rich.
Foul Language:
71 obscenities, 16 profanities, vomiting, name-calling, comment about bullying, boy shows chewed food in his mouth
Violence:
Horse is shot and killed out of mercy because of how sick it was, dead horse seen
Sex:
Depicted marital sex in one scene, married couple kisses a few times, man and woman kiss on cheek while greeting one another, and husband slaps wife’s rear end
Nudity:
Upper female nudity seen twice, upper male nudity and man in his underwear twice, young boy seen in his underwear and wears leotards while at gymnastics practice
Alcohol Use:
Underage drinking at a house party, wine, beer and alcohol seen and drank throughout the movie, one scene shows woman drunk in a bar and drives home but ends up pulling over and sleeping until morning (her drunkenness isn’t rebuked
Smoking and/or Drug Use and Abuse:
Cigarette smoking throughout by one character, another underage character is seen smoking a cigarette, and there’s a minor comment about buying speed and having a party; and,
Miscellaneous Immorality:
Lying, deceit, greed, dysfunctional family and marriage, bad role model from a father figure, teenage rebellion, selfishness, and a comment is made that divorce happens because couples have expectations of “wanting it all.”

THE NEST follows the O’Hara family in the mid 1980s during the Reagan era. British expatriate Rory O’Hara, his American wife Allison, his stepdaughter Sam, and his son Ben live a comfortable life. They’re a bit more well-off than the average family during this time, and they seem happy. Allison works at a horse stable training and taking care of horses, while the children have fun participating in extracurricular activities and hanging out with friends.

However, Rory seems unhappy. Rory calls an old business partner in London to talk about job opportunities. One morning while waking Allison up, Rory tells her he’s been offered an incredible opportunity in London under Arthur Davis, an old colleague. Allison is furious Rory wants to uproot their family again and tells her mother she has a bad feeling about it. However, the family moves to London anyway.

Rory seems to be on top of the world. Rory rents the family a gigantic old mansion with aspirations to build a stable in the back so Allison can have her own business. Rory also enrolls Ben in a very expensive school, but doesn’t award Sam the same treatment. However, the family doesn’t seem to enjoy the house or any of the things Rory’s doing for them. On top of that, Allison isn’t sure where all this money is coming from that Rory’s spending.

The whole situation in London continues to get worse when Rory and his business ventures aren’t turning out. However, he keeps spending money and lying about his lifestyle to keep up appearances. Allison is furious about what Rory is doing, and she’s also stressed about her own business endeavors with her horse stables. Meanwhile, both Sam and Ben start to go down roads they never ventured on back in the U.S.

Will this family stay together, or will the move, the house and their relationships totally disintegrate and cause them to split up?

THE NEST has an eerie, creepy, supernatural feel to it, while not being any of those things at all. The dark atmosphere help sets the tone that this family isn’t as happy as the audience believes. Sadly, the movie is very anticlimactic as it follows each member of the family in their downward spiral, with no real resolution at the end. That said, Jude Law and Carrie Coon deliver great performances while portraying a married couple whose marriage is on the rocks.

THE NEST has a strong humanist worldview where the main character think’s he deserves all the money and luxuries life has to offer because of his poor upbringing. The character will go to any length to get what he wants and keep up appearances. There are a couple elements supporting family, such as a comment that children and family are more important than being rich. However, the movie also contains lots of foul language, a bedroom scene, brief nudity, light substance abuse, and miscellaneous immorality. Because of the humanist, immoral elements in THE NEST, MOVIEGUIDE® finds the movie over the line when it comes to unacceptability.