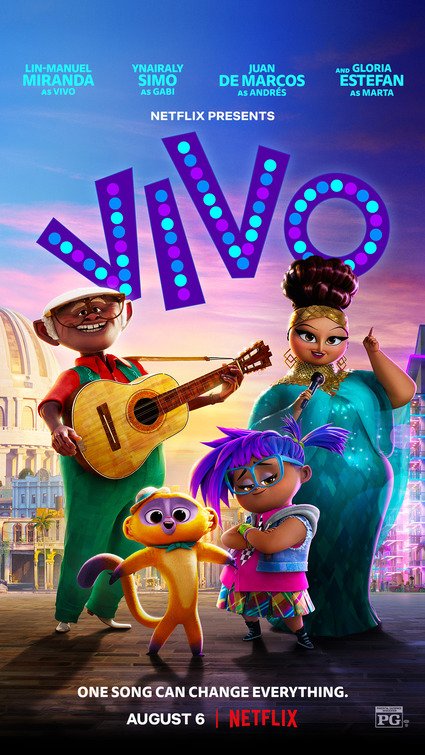 VIVO is an animated musical on Netflix. Vivo is a small ring-tailed mammal in Cuba who performs alongside Andres, an elderly musician and Vivo’s best friend. Vivo is used to his small world, when Andrés receives a letter from Marta, an old singing partner and the love of his life. Andrés shows Vivo a song he wrote for Marta, but never had the courage to show her. Vivo feels his perfect life’s in jeopardy. However, Andrés dies of old age before he’s able to see Marta and tell her his true feelings. Vivo vows to get his friend’s final message to Marta in Miami, Florida. At Andrés’ funeral, he meets a relative of Andrés. Will the unlikely duo make it to Marta before it’s too late?

VIVO is a colorful, delightful adventure, with heartfelt moments and joyful, Cuban music. The movie has a strong moral worldview, with redemptive themes. It champions selflessness and the beauty of music. Vivo sacrifices his comfort for the sake of Andrés. VIVO has some discussions about death and sequences of mild peril. MOVIEGUIDE® advises caution for younger children.

(BB, C, V, M):
Dominant Worldview and Other Worldview Content/Elements:
Strong moral worldview champions the importance of friendship, loyalty and selflessness, with light redemptive themes like sacrifice, plus there are moments where a child rebels against her mother, but this is redeemed later in the movie
Foul Language:
No foul language
Violence:
Brief moments of cartoon violence, a giant python chases Vivo and Gabi through the everglades (this could frighten younger viewers), a man dies of old age, this is not graphic, but could upset some younger viewers, and there is mention of someone’s dead father
Sex:
No sex
Nudity:
No nudity Alcohol Use/Abuse: No alcohol use
Smoking and/or Drug Use and Abuse:
No smoking or drugs; and,
Miscellaneous Immorality:
Some discussions about death could be upsetting, but the movie addresses them in a heartfelt way.

VIVO is Sony Pictures Animation’s first animated musical and features original songs written and performed by Lin-Manuel Miranda, the man behind HAMILTON as the title character. The movie is an animated musical that follows a kinkajou named Vivo who performs alongside his best friend, an elderly musician named Andrés, but Vivo is forced to embark on a journey from Havana, Cuba to Miami, Florida to fulfill his friend’s final wish. VIVO is an endlessly colorful, delightful comic adventure, full of heartfelt moments and joyful, Cuban-style music, but some sequences of peril that could frighten younger children.

The movie opens as Andrés, an old man with a guitar, walks out into the middle of a plaza in Havana, Cuba. Andrés introduces Vivo, a musically talented kinkajou, a small ring-tailed mammal related to racoons, the ring-tailed cat and other species, who performs alongside Andrés. The dynamic duo are city favorites and seem to have a perfect life.

One day, however, Andrés receives a letter from a long-lost friend and fellow musician, Marta. Marta inquires if Andrés would like to attend and perform with her at her final concert of her long career.

Andrés is filled with joy at this prospect but is worried he’s too old to travel from Cuba to Miami, Florida. Initially, Vivo worries that his perfect life with Andrés is jeopardized by this potential trip to Florida.

However, Andrés tells Vivo he used to perform with Marta and that she was the love of his life. After Marta received an offer to bigger and better performances, she left for the United States, but Andrés stayed behind, never telling her how he truly felt. After Marta left, Andrés wrote a song about his love for her and stored it away.

After remembering how Andrés has cared and loved him, Vivo vows to help his best friend deliver the song. However, the morning they are supposed to leave, Andrés dies. While at his funeral, Vivo runs into a relative of Andrés’, a young girl named Gabi.

Vivo realizes Gabi is his ticket to Florida. So, he stows away on the trip back to her home in Key West. Vivo realizes he won’t make it to Miami without Gabi’s help. So, the unlikely duo sets off on a journey to give Marta Andrés’ final song.

VIVO is an endlessly colorful, delightful comic adventure, full of heartfelt moments and joyful, Cuban-style music. The movie has a strong moral worldview with redemptive themes. It champions the importance of selflessness, loyalty, friendship, and the beauty of music. Also, Vivo sacrifices his comfort for the sake of Andrés and befriends Gabi despite their differences. VIVO has some discussions about dying and sequences of mild cartoon violence and peril. So, MOVIEGUIDE® advises caution for younger children.