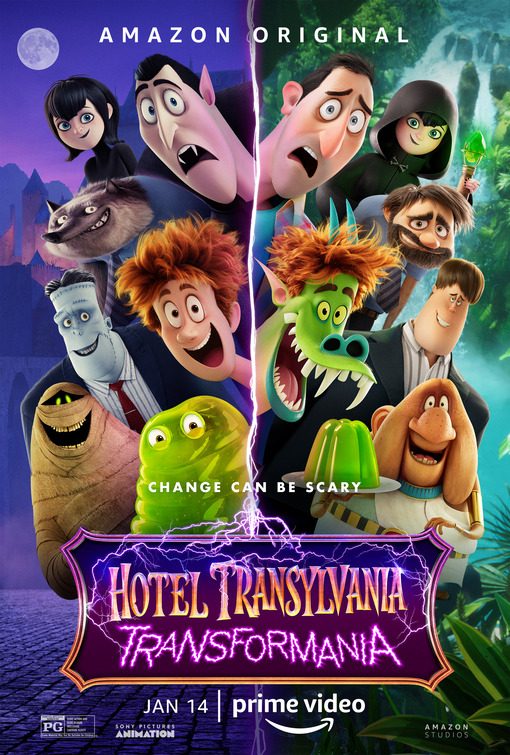 (BB, C, O, V, N, M):
Dominant Worldview and Other Worldview Content/Elements:
Strong moral worldview with light redemptive content stresses family, love, forgiveness, and sacrifice, but there are some references to magic such as a magic potion, a magic broom, and characters are said to have magic within them
Foul Language:
No foul language
Violence:
Man falls from great heights, and monster tries to attack people
Nudity:
Man is shown without clothes, but he covers himself
Alcohol Use:
No alcohol use
Smoking and/or Drug Use and Abuse:
No smoking or drugs; and,
Miscellaneous Immorality:
A character lies, but it’s revealed and rebuked.

In the animated movie HOTEL TRANSYLVANIA: TRANSFORMANIA, Count Drac is finally retiring and giving his beloved hotel to his daughter, but things get complicated, and he must get out of a bind with his son-in-law. Streaming on Amazon Prime, HOTEL TRANSYLVANIA: TRANSFORMANIA is a funny, enjoyable movie with some pro-family, redemptive themes of forgiveness and sacrifice, but it does have monster characters that could scare younger children, plus references to magic.

Drac finally feels like he can give over the hotel to his daughter, Mavis, during the anniversary party. Mavis overhears this and tells her husband, Johnny. Johnny gets so excited he goes to tell Drac this means a lot to him because he has great ideas for the hotel. Suddenly, Drac panics and decides not to give the hotel to Mavis and Johnny, telling Johnny he must be a monster in order to get the hotel.

Soon after, Johnny goes to Van Helsing and requests a potion to change him into a monster. Drac sees him and tries to stop it from happening, but Van Helsing has already turned Johnny into a monster. Chasing Johnny with the potion, Drac uses it all up, except for one last ounce, which accidently is used on himself, turning Drac into a human.

HOTEL TRANSYLVANIA: TRANSFORMANIA is a very funny movie that has some heartfelt moments. The movie overall is well done and entertaining. Viewers may relate to the jokes about getting along with family no matter how silly and goofy they tend to be.

HOTEL TRANSYLVANIA: TRANSFORMANIA has a strong moral worldview with an emphasis in loving family despite their flaws. The movie also has some redemptive elements stressing forgiveness and sacrifice. The movie has some issues, however, because some of the characters, who are Halloween and monster themed, may be scary for young children. Many of these monster characters become human for most of the movie. Though this is the case, children could get scared of the scenes with monsters. TRANSFORMANIA also has references to magic, including the magic potion and a magic broom.