5 Things You Should Know About WAR ROOM 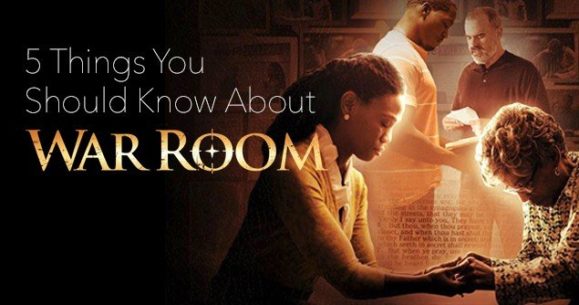 5 Things You Should Know About WAR ROOM

This year, a movie is coming to theaters that proclaims the power of prayer as a leading role in healing the broken lives of families. The movie is called WAR ROOM. It follows Tony and Elizabeth Jordan, a married couple who seem to have everything they could want, but only on the outside. Behind closed doors, their marriage is falling apart, and they are fighting constantly, pushing away from each other and hurting their daughter in the process. When Elizabeth meets an older woman, Miss Clara, things begin to change. Miss Clara teaches her how she can fight for her family instead of against it through prayer. WAR ROOM is a story to which many struggling families will relate. Before it hits theaters August 28th, here are 5 things to know about WAR ROOM:

WAR ROOM comes from the famous Kendrick brothers, the minds behind many of the most popular recent Christian films, including the Movieguide® Award Winners COURAGEOUS, FIREPROOF and FACING THE GIANTS. These films have achieved acclaim from Christian and non-Christian audiences alike, which, hopefully, will be a good indicator for WAR ROOM.

Starring as Elizabeth Jordan is Priscilla Shirer, which may come as a shock to some. Shirer is an author and speaker who has written over 50 books in total, including devotionals and Bible studies. Shirer founded Going Beyond Ministries with her husband, Jerry, and has been in the ministry field for almost two decades.

In 2013, the Kendrick Brothers cut ties with Sherwood Pictures, the company that produced their first three films. WAR ROOM is the first movie to be produced through the newly formed Kendrick Brothers Productions, which has partnered with Provident Films, AFFIRM Films and TriStar Pictures to release the film.

On the official WAR ROOM movie website, (warroomthemovie.com) site visitors can actually click a button on the home page to see a daily prayer request that changes as the movie gets closer to its release date. Each day, the creators of the movie have a prayer request posted that invites everyone to pray for God to use WAR ROOM to call families, churches and believers to draw closer to God.

5. Faith focused and filled with love.

If it wasn’t already obvious, WAR ROOM is full of extremely strong Biblical and Christian themes. After wrapping up week one of the movie filmming, producer Stephen Kendrick said, “The cast is amazing, the crew is amazing. We’ve got a unified team. We started off this week in prayer and we’ve just dedicated it to God and we’ve seen Him show up every day on set.” There is clearly a lot of love going into this movie.