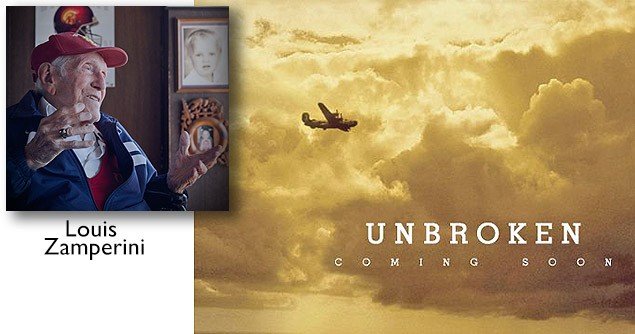 Actress Angelina Jolie, like other powerful stars in Hollywood, has begun directing her own movies. Surprisingly, her next project is about a Christian athlete, with a script penned by the notorious Coen brothers (FARGO, RAISING ARIZONA, and TRUE GRIT).

Born the son of Italian immigrants in 1917, Zamperini was a smoker by age 5, a school bully by third grade, and a menace to society by high school. Thankfully, Zamperini was encouraged to put his talents toward more productive pursuits, such as running track. Successful in the sport and eventually known as “The Tornado from Torrance,” Zamperini was invited to train for the 1936 Olympics and eventually enrolled at the University of Southern California on a scholarship. At the 1936 Olympics in Nazi-ridden Berlin, Zamperini’s most notorious fan was Adolf Hitler. After his disappointing placement in the 1936 games, Zamperini hoped to re-qualify for the Olympic team in 1940, but the games were cancelled due to the outbreak of World War II.

A bombardier in WWII, Zamperini’s aircraft crashed into the Pacific Ocean. He and one other survivor spent 47 days at sea in a life raft, drifting some 2000 miles, only to be picked up by a Japanese war ship. The Japanese put Zamperini and his companion into their horrific prison camps, where he was tortured beyond depiction for two years. He was made a special object of cruelty by the infamous Japanese torturer known as “The Bird.”

When the war ended and Zamperini found himself a survivor of abominable times, he returned to California, where he met and married his wife, Cynthia. Unfortunately, Zamperini eventually turned to alcohol and a destructive lifestyle to numb the pain and ease the nightmares that haunted him from the war.

This damaging behavior lead Zamperini’s wife, Cynthia, to ask him for a divorce. However, she attended a Billy Graham crusade and became a Christian. So, she reversed her decision to divorce her husband and instead attempted to convert him, surrounding him with her newfound faith and Christian community. Zamperini, desperate to save his marriage, reluctantly agreed to attend one of Billy Graham’s crusades. He was surprised to find himself in the middle of the ultimate life-changing moment – that of salvation.

During the crusade, Zamperini recalled his forgotten prayers to God of promised service and prayer while he was drifting on that raft in the middle of the Pacific. While listening to Billy Graham preaching his sermon, Zamperini found himself convicted of his broken promises to God and, on his knees, dedicated his life to Christ. As of that day, Zamperini was done with excessive drinking and smoking, violent nightmares, and dreams of revenge. What took its place was a yearning to forgive those who had persecuted him and attempt to reconcile with the POW officers who had tormented him with the love of Christ. Now in his 90s, Zamperini has spent the rest of his life preaching the Word of God and trying to inspire others with the joy and promise of healing that his relationship with Christ has bestowed.

Jolie, who recently started filming the project in Australia, has said she’s inspired by Zamperini and the two have grown to be close friends. While Hillenbrand’s biography touched on Zamperini’s incredible faith, it did not emphasize it – something that will hopefully be rectified through Jolie’s personal relationship with Zamperini and first-person witness to his Christian testimony.