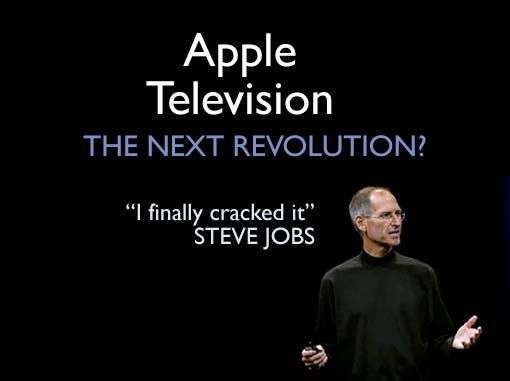 According to Steve Jobs’ biographer, Walter Isaacson, Jobs said, “I finally cracked it,” in relation to Apple entering the television manufacturing business.

The stir this is causing is interesting to watch.

You can expect Apple’s television to cost more than other televisions, which have become something of a commodity (like buying a bushel of corn). You can expect the television to be worth the price because it will be revolutionary. It will, no doubt, use Apple’s Siri voice recognition capabilities to perform tasks. You can expect it to be synched with other Apple devices so you can tell your television to record a program from a restaurant using your iPhone. You’ll be able to watch your programs from any Apple device you wish, iPad, iPhone, or television.

The big question will be, “Did Steve Jobs manage to negotiate access to all manner of programming on demand before he died?” Tim Cook is supposedly a brilliant chief executive capable of getting an Apple TV built and delivered to millions of customers, but does he have what it takes to grab the hand of the entertainment industry and pull it into a revolution the way Jobs did the music industry?

The most remarkable features possible on an Apple TV are not technological, though you can expect some great new technology. What will really make the device revolutionary is if it shatters the whole concept of television schedules.

The future of television is in the clouds. It’s in programming libraries that can be accessed from anywhere whenever a viewer wishes to see something. The technology exists. The owners of the programming haven’t figured out how to make the profit they want from cloud services. Networks are used to charging advertisers. Cable TV companies derive huge revenues from subscribers (people stuck watching programs scheduled on networks). This is what Jobs must “crack.”

A revolution requires the destruction of old methods for paying for content. Revolutions are scary. Ask music stores how they feel about iTunes (if you still have a local music store).

Do they sell as many CDs as they once did? No. Their music is in the cloud. You buy only the songs you want and now they’re synchronized on multiple devices – thanks to Steve Jobs.

Do you really need a shelf full of DVDs?

Are you happy with the limited hours available on your DVR? An Apple TV revolution changes that.

Steve Jobs had no interest in competing to make a television that’s hooked up to your local cable company offering only what every other television offers. Steve Jobs was a revolutionary.

If, indeed, Jobs “cracked it,” you can expect a device soon that will send competitors scurrying to catch up.

Competitors have had huge difficulty catching up with iPods, iPhones, and iPads because Apple revolutionized the environment that serves their devices. When you buy an Apple product, you enter this environment.

Part of the revolution in music has been that you don’t have to get past as many gatekeepers to sell music. It used to be that to get on the shelf of a music store you had to have an agent who could get you a contract with a major record company. This is still helpful if you want to make major sales, but there is more opportunity for beginners to rise based on merit. The iTunes store offers 20 million different songs, and they’ve sold over 16 billion.

The freedom to produce and distribute entertainment is rapidly increasing, but so too is the garbage that such an opening produces. When anyone can put their wares on the Internet, you don’t have to learn your craft before you make your work available. You can find some wonderful things on YouTube, but there’s a lot of stuff even family members won’t suffer through.

Even in a very wide market, quality improves market share.

What the liberation of the entertainment industry means is that a church like NorthPoint can post great quality sermons on the Internet, and you’ll be able to tell your Apple television, “Let me see Andy Stanley’s latest sermon.” It will come on your television in high definition. You’ll be able to ask, “Has Andy Stanley preached anything on divorce?” You’ll get some choices.

Imagine asking your Apple TV, “What old Julie Andrews movies are available?” You’d get a selection. You might be able to watch some with commercials, rent some, or buy a copy for your cloud library that you can watch any time from any device.

If you want to know how to bake red snapper, just ask your Apple TV. You’ll be offered instructions from multiple sources. The better-known chefs might make you watch a commercial first.

Let’s say you want to see FATHER OF THE BRIDE starring Steve Martin but you’d like to see what MOVIEGUIDE had to say about it first. You tell your Apple TV, “MOVIEGUIDE® review for FATHER OF THE BRIDE.” Up comes Ted Baehr looking 20 years younger (with his mustache) and you hear what fun the movie’s going to be. Ask for the full review and you’ll see the text version, which your television can read to you if you wish.

The Tuesday “New on DVD” newsletter would be renamed to something like “Now Available for Download Newsletter.” It would announce which movies are becoming available through library services.

Who knows, MOVIEGUIDE® could even negotiate with filmmakers, or some larger service, to offer downloads directly from Movieguide listings.

Internet junkies can spend a lot of time on YouTube, but there will always be a profitable place for Pixar as long as they keep investing in high quality family entertainment. Children generation after generation will still enjoy FINDING NEMO and parents will be willing to pay to “own” it in their cloud.

Low entertainment value reduces audience size. Christians seeking to thrive in this revolutionary era must provide high value. That’s even true for sermons. Many great sermons will be available, as will classes in almost any subject you care to name. The ones that attract viewers will be the ones that provide the most value. Everything will be rated, both by hits and by consumer reviews. That includes all video productions of churches.

While not a direct consequence of Apple TV, the church itself is in the middle of a revolution.

NorthPoint church in Alpharetta, Georgia can now have a local branch church in Minot, North Dakota – with a local personal care pastor, small groups, youth groups, etc. – but they’ll have a large screen for Sundays offering Andy Stanley’s sermons. Local pastors will be competing with the nation’s most popular preachers. Church members decide what kind of church they value. Some will value being in a branch church of a media master. Andy’s sermons are often introduced with a small movie. His baptisms include a pre-recorded, nicely produced video testimony by the person being baptized.

They are more accountable to advertisers than to audiences because audiences don’t pay directly for the shows they watch. Advertisers won’t pay as much for shows with low ratings but there is nowhere near the direct correlation found in the movie business. With movies you have to get actual customers to buy tickets or DVDs. With television you just have to be better than your typically lousy competition. People will watch things on television that they would not buy tickets for – including things with reprehensible moral values. What they want is entertainment.

As long as all the networks are pushing liberal trash, they don’t have to compete with wholesome entertainment. When the Apple TV revolution wipes away network schedules, everything be competing on a more level playing field. If there’s some good family entertainment available in the cloud, it goes up against everything else in the cloud.

If MOVIEGUIDE®, or another trusted source, can alert enough people to the availability of wholesome programs with high entertainment value, the liberal programs pushing values Americans don’t appreciate will begin to lose audience share.

There will be lots of opportunity for those who want to make wholesome entertainment, but again, the key will be in providing entertainment value. Most Christians will watch MODERN FAMILY before they’ll watch lame Christian entertainment.