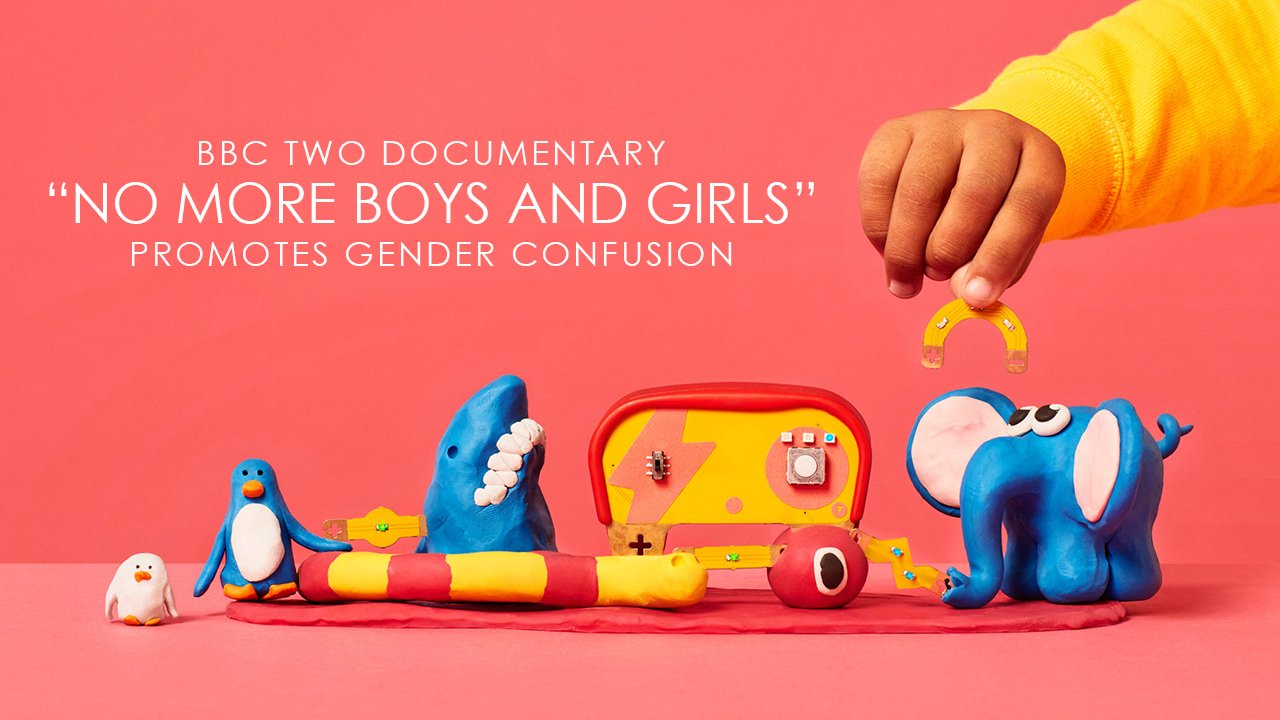 In the clip from the series released this past weekend, both a boy and girl child are subjects of an experiment that investigates their interactions with children’s toys.

As Calvin Freiburger of LifeSite reports, “The BBC suggests that ‘stereotyped’ toys will disadvantage girls later in life, noting that men “hugely dominate careers prizing maths, spatial awareness and physical confidence — attributes ostensibly reinforced by ‘male’ toys. The video does not identify what boys are supposed to gain from girls’ toys. Are boys born ‘better’ at these? Is it nature or is it nurture?”

Despite all the effort, “Sophie” and “Oliver” gravitated to toys of the gender at birth.

Volunteers later found out that the children were made to appear like their opposite gender and expressed remorse for “stereotyping.” Some volunteers even went as far as to say it completely changed their perspective on how to interact with children in the future and not prejudge their toy preferences.

One volunteer from the video stated, “It will make me think, the next time I’m with a child, like my niece or my nephew, to make sure that I am actually being fair and equal with all of them,” another said. “And just giving each child an opportunity to just be whoever they are.”

The BBC is definitely on the gender bandwagon. Many Twitter users replied to the video online. @BanTheBBC tweeted, “This is child abuse by the state. Sick, twisted and evil. #NoMoreBoysAndGirls”

@DrDebraSoh tweeted, “Look at how bored these children are, playing with the toys of the opposite sex. And, what about studies showing that female and male brains develop differently in the womb? Adults are socializing them then @BBC #NoMoreBoysAndGirls”

Obviously, the gender discussion is not going away. Many in the medical field have objected to the politically correct push to eliminate gender. The American College of Pediatricians, a national organization or pediatricians dedicated to protecting children states, “No one is born with an awareness of themselves as male or female; this awareness develops over time and, like all developmental processes, may be derailed by a child’s subjective perceptions, relationships and adverse experiences from infancy forward. People who identify as ‘feeling like the opposite sex’ or ‘somewhere in between’ do not comprise a third sex. They remain biological men or biological women.”

The host of the TV series, Dr. Javid Abedlmoneim, is no stranger to primetime TV. His past credits also include EBOLA: THE DOCTOR’S STORY and CONTAGION! THE BBC FOUR PANDEMIC. NO MORE BOYS AND GIRLS: CAN OUR KIDS GO GENDER FREE? Was nominated for a BAFTA TV award, but it didn’t win.

Shows like NO MORE BOYS AND GIRLS further pollute the media landscape with confusion and manipulation. For example, on a clip on the BBC Two website titled “Gender neutral education,” Dr. Abedlmoneim equates economic equality with gender, urging school children to think with a more gender-neutral mindset in hope that as adults they will make the world a more “equal” place.

This thinking is very prominent in the US as well, with the NY Times reporting that many states will now offer a nonbinary birth certificate. Yes, you heard correctly. Adults who do not identify as either male or female can now receive documentation that states they are neither male or female.

The flaw with Abedlmoneim’s agenda is thinking that we can change social injustice by suppressing biological gender assignment. Rather, what we should be doing to help squash social injustice is appreciating our difference as women and men respectively. By acknowledging our biological differences, we can better value our strengths and weakness and build from there. Making everyone gender-neutral and confusing our children isn’t the answer.

Rise above this injustice! Please, do not watch shows that advocate for gender neutrality, and secondly, pray!

“This is the confidence which we have before Him, that, if we ask anything according to His will, He hears us.” (1 John 5:14 NASB)Sources: https://www.lifesitenews.com/news/no-more-boys-and-girls-bbc-champions-gender-free-child-raising-in-new-docum