Behind the Scenes of 5 DAYS OF WAR: 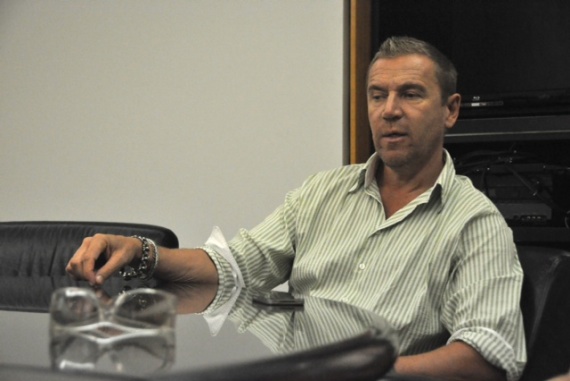 Renny Harlin on War, Christianity and Making Movies that Count

Renny Harlin (DIE HARD 2) is back with a movie that makes a statement.

5 DAYS OF WAR follows the story of American journalist Thomas Anders. Caught in the midst of the conflict that erupted

in South Ossetia during the 2008 Olympic games, Anders and his cameraman take on the almost impossible task of getting footage of the atrocities they witness out to the rest of the world.

Inspired by true events, 5 DAYS OF WAR does not hide its pro-Georgian perspective, nor does the director.

“I come from Finland, a small country like Georgia,” said Harlin. “We have our own struggles. During the Second World War, my parents and grandparents were involved and everybody lost their loved ones. I automatically related to that sense of David and Goliath and a small country struggling to hold on to its independence against a big, powerful conqueror.”

Look at the size of Georgia on the map, and you’ll understand what he means.

Compared to the powerful Soviet Union, Georgia is minuscule and so is its army. It’s almost laughable to imagine Russia crossing the border to protect itself from a looming military threat.

Harlin traveled to Georgia and interviewed journalists, survivors, and refugees in preparation for filming. He recalls the great sense of loss that the aftermath of war wreaks on the survivors.

“In the rapid news cycle of today’s world, there’s a new story developing tomorrow, and today’s story is already old news. Many news organizations are owned by multinational corporations and have all kinds of interests that we don’t think about. As a result, the true story doesn’t always get out.”

Stories shared by real-life journalists inspired Harlin to tell 5 DAYS OF WAR through the eyes of a journalist, Thomas Anders.

“I remember listening to one French journalist who told me about seeing incredible atrocities and then rushing to his hotel to tell his publication in Paris,” Harlin explained. “They said, ‘thanks a lot, but we’re not really going to run with this because this doesn’t sit well with the main story we already launched. We’re busy and tomorrow we already have another story.’”

In frustration, the French journalist threw the phone into the wall, shattering it into a hundred pieces.

Harlin also met a German photographer, who became so frustrated with what he witnessed and how little he was able to do, that he applied for Georgian citizenship, became a Georgian citizen, and is now fighting in the Georgian army in Afghanistan.

For Harlin, filming 5 DAYS OF WAR was a transformative experience.

He developed a passion for Georgia, especially its Christian identity. That fascination permeates the movie, full of Christian icons, like the medal of St. George, and esthetic scenes shot in ancient churches.

“When I went to Georgia I discovered it’s one of the oldest Christianities,” said Harlin with admiration. “It’s also a mainstream European country, like a Mediterranean country. There are vineyards and orange orchards. Even the look of the land is very familiar, relatable and beautiful. From the get-go my main focus was to show people how beautiful this country is.”

Harlin’s eyes lit up when he remembered the churches and monasteries scattered across the Georgian countryside.

“I just fell in love,” he added with a smile. “I visited all these churches built 1500 or 2000 years ago with amazing art and craftsmanship. Year 400, they would build this giant church on a mountaintop and dig a huge tunnel under the mountain and under a river into the monastery, just in case the enemy attacked and they had to save people from the church, or vice-versa. It must have taken tens of years – a hundred years – to build something like that.”

“If you want something [today], you have it by tomorrow,” Harlin said. “In those days, though, the mentality was so different. People could look way beyond their own lives and futures and into the futures of their grandchildren and what they would need instead of just getting instant gratification for themselves.”

For Harlin, that is the enduring legacy former generations of Georgians bequeathed to the world – a legacy that modern warfare can annihilate in a split second.

Harlin credits working on a movie with a renewed and more mature excitement about filmmaking.

With a modest budget of $12 million, Harlin has crafted a convicting movie that should have American audiences flocking to theatres in support. Last week, 5 DAYS OF WAR opened in the Northeast. On September 2, it comes to Los Angeles. It won’t open soon enough in other cities.