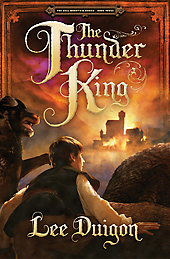 In tough times, it’s difficult enough to convey hope without sounding like Pollyanna, the ridiculously upbeat heroine of the Disney movie of the same name.

But, how about offering real hope while the world is coming apart at the seams, evil is on the march, and prophets are predicting doom?

It’s all there in The Thunder King, Lee Duigon’s third installment of the Bell Mountain series, a fantasy of epic proportions set in a medieval world that arose on the ashes of a sophisticated civilization.

Duigon, who wields one of the sharpest and funniest pens as a cultural/political columnist, keeps the action crisp, the characters believable, and the reader guessing where it will all end.

After young protagonists Jack and Ellayne rang ancient King Ozias’s bell on faraway Bell Mountain, strange things unfolded in the first two Bell Mountain books, with prophets who could be understood in any language and a Temple elite of a decadent religion quaking before growing evidence that the One True God was reasserting Himself.  Meanwhile, the land of Obann is invaded by Heathen hordes, some of whom turn out to be susceptible to God’s timeless truths. There is plenty of action and plotting to keep the most restless readers turning pages.  This is good stuff, and it reminds me of L. Frank Baum’s books, such as The Wizard of Oz and Sky Island, only with a Christian sensibility.

Accompanied by the former Temple-sent assassin Martis and the mysterious little, hairy manlike creature Witt, the two children set out for the great capital city of Obann, which the prophets say is about to experience God’s judgment. So why go there? Because God says so.

The wild card in the deck is the young, newly crowned King Ryons, who runs away from the throne, only to find out that it’s not so easy to evade a destiny chosen for you by God.

As in the previous books, one of the most intriguing characters is the First Prester (chief priest) Lord Reesh, whose Byzantine schemes are always a step ahead of his slow-witted followers.  Watching Reesh at work, you can’t help but think of certain politicians of our own time, or the shiny hypocrisy emitting every day out of Hollywood.

And, who is the Thunder King? Only a mysterious ruler bent on conquering the whole world and doing a fine job of it. Beyond that, you’ll have to read deep into this book – and perhaps into the next one.

Robert Knight is an author who writes frequently on culture and politics. He is a Senior Fellow at the American Civil Rights Union and a columnist for The Washington Times.