The Christian Mom Who Made Hundreds of Millions of People Laugh 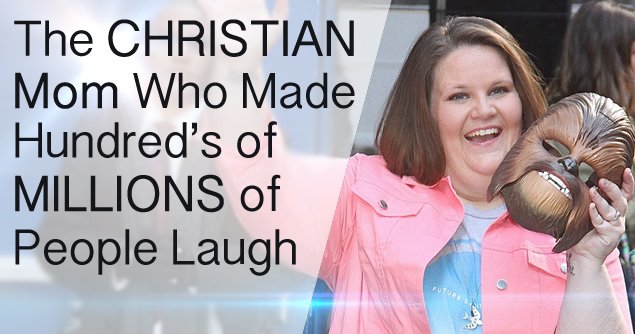 The Christian Mom Who Made Hundreds of Millions of People Laugh

That’s the title of the record-breaking Facebook video that has charmed millions of people and catapulted a Texan mom of two into the spotlight. With over 140 million views in under a week, Candace Payne has proven that laughter is truly contagious.

The three-minute video features Mrs. Payne sitting in her car, about to reveal to viewers (viewers she jovially refers to as her “friends on the Internet webs!”) a fun new toy she claims will be her own, despite the fact that she has two young children who will no doubt want it for themselves.

“Stay patient, people. Stay patient,” she says as she pulls it from the box. “This is gonna be worth it, I promise.”

Worth it it was, because moments later, she’s wearing a Chewbacca mask that makes Wookiee sounds when she opens her mouth. The second she sees herself in the camera, she bursts out into hysterical belly laughs which last for several minutes.

“I’m such a happy Chewbacca!” she exclaims before pondering whether to drive around town wearing the mask on. The fact is, it isn’t the happy Chewbacca people have been enchanted by, but the happy woman who took the time to share her simple joy.

“What’s been the best part of all this?” asked Roberts after Payne was given a basket overflowing with Star Wars toys and a $2500 gift card.

“In all honesty,” answered Payne, “the best part of all of this is being able to share joy with people, hear stories of people coming out of depression.”

Payne went on to describe a message she received from a woman with an autistic daughter who hadn’t laughed in two months. The video changed that.

“She laughed and laughed. From one mama heart, to another mama, to see a child laugh that you haven’t seen laugh, those are the stories I’m going to take with me every day.”

Overcome with emotion, Roberts stood and gave Payne a hug. “That is beautiful!” she said. “That was a moment.”

In a society saturated with a constant barrage of viral videos and overnight sensations milking their 15 seconds of fame, Candace Payne’s moment seems different from all the rest. There’s an almost visible light about her that shines through her eyes and in her laughter, attracting people like moths to a flame.

Speaking to a crowd of young people at a recent Christian conference, Payne said the following about moments and the Lord’s timing:

The world and all its so-called “motivational” and self-help gurus bark at us to hustle, to chase, to replace sleep with caffeine and relaxation with more work, to strive for success – whatever that means – and not to stop working until we reach it. As a result, many of us are so wrapped up in the rat race that we forget to wait upon God and the opportunities He has in store if we’ll only be patient and trust in His timing. Along with our workaholic mentality, we often forget to enjoy simple pleasures and to be on the lookout for moments of blessing and joy and goodness in the seemingly silly and mundane.

Mrs. Payne may only have 15 minutes of fame, but her infectious message of joy is something that we can help perpetuate as we seek to share love and laughter and the light of Christ with those around us.