Classic Television and Movies Are Having a Comeback 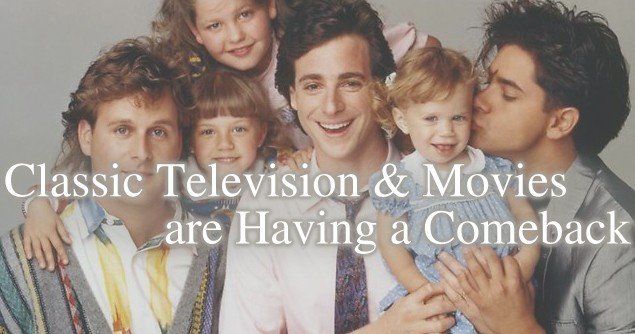 Classic Television and Movies Are Having a Comeback

Today, all ages are interested in retro tv and movie classics. For many, their favorite TV channels include: Turner Classic Movies, ME TV (Memorable TV), and the Hallmark Channel. Vintage classic tv shows, movies, and sports programming are popular on all platforms of entertainment delivery. The most popular TV channels in the world include BBC, ESPN, and Disney. For many there is a longing for earlier and better content and quality programming. With all the violent, sacrilegious and profane news, entertainment programming with these elements is losing ground, while classic sports and family programming across platforms is prevailing. For example, on October 28, 2015, Variety reports, “Fox’s coverage of the World Series is off to a great ratings start, with Tuesday’s Game 1 delivering the highest overnight score in six years. Among the victims was ABC’s premiere of crime drama “Wicked City,” which opened very low in the night’s final hour.” In response to growing consumer interest, CBS recently announced that they are launching a retro digital channel.

Variety has reported in their article on the retro revival and “FULL HOUSE” that “…the family sitcom ran eight seasons on ABC, from 1987 to 1995, and although it rose into Nielsen’s top 10 twice, few in the industry would have predicted such continued interest in the show. Yet, on August 22nd, Lifetime airs made-for-TV movie “The Unauthorized Full House Story,” and Netflix’s “FULLER HOUSE” reboot will premiere some time in 2016, with most of the principal cast members having signed back onto the program…”There have always been reruns and classic TV shows, but it seems like we’re in a new era of viewers who are fanatic about nostalgia for their favorite shows and characters,” says Keith Dawkins, TeenNick senior VP. Nick at Nite has aired “Full House” throughout the 2000s. Dawkins says part of the show’s appeal is that it crosses generations as a rare program that kids can watch with their parents. Lifetime senior VP of original movies says, “We picked ‘Full House’ because it was so beloved.”

Movie theaters now offer classic films series. On October 28, Cineplex reports that “MR. SMITH GOES TO WASHINGTON” will be on their big screens today. They provide a trailer for the movie and announce future classic film showings. The trilogy of “BACK TO THE FUTURE” movies has been in theaters recently with a corresponding Blu-Ray edition available with extra features.

Viewers will need to exercise care in watching reboots (new versions of older shows) as opposed to reruns of vintage programs. For example, ABC’s rebooted, newer version of “The Muppets” is far less family-friendly than the earlier Muppet shows and movies. However, as long as socially responsible consumers voice their concerns and desires for quality programming, they can influence and impact producers of programming across platforms.

On October 28, Social Trends, Huff Post reports research on “how large populations come to be in agreement about ideas and codes of conduct… study explains how certain ideas and behaviors can gain a foothold and, all of a sudden, emerge as big winners.” They quote researcher Professor Centola, “It is a common misconception that this process depends upon some kind of leader, or centralized media source, to coordinate a population. We show that it can depend on nothing more than the normal interactions of people in social networks.” This research offers insight on how social change occurs within the context of online activity. Centola tells HuffPost, “The capacity of these networks to produce this kind of massive change in behavior, even though no one person or organization is advocating it, suggests that large and unexpected swings in collective attitudes and collective behaviors may become more common in the future as more and more people are connected online.” (This research was published in the Proceedings of the National Academy of Sciences.)

The current emerging Renaissance of artistry and Reformation of content will continue with socially responsible consumer online voices and votes.