A Media-Wise Report on Foul Language 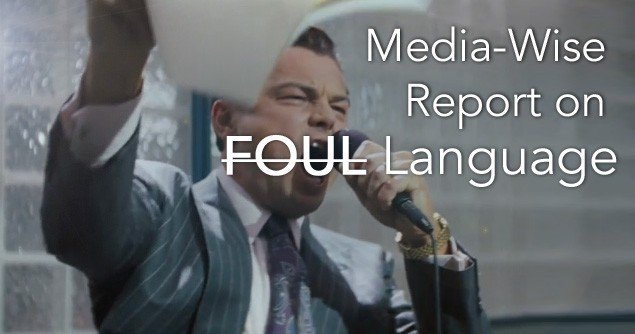 A Media-Wise Report on Foul Language:

Much is at stake for young people, families and communities when it comes to safeguarding the minds, hearts and experiences of children, teenagers and young adults.

One of the cruel ways to abuse youths is by exposing them to obscenity, profanity and verbal abuse that shows malice, disrespect, disregard, and lack of empathy toward other people, including family members.

According to a Harvard University Study reported in the Harvard Gazette in 2007 (http://news.harvard.edu/gazette/story/2007/04/verbal-beatings-hurt-as-much-as-sexual-abuse/), “Verbal. . . abuse. . . can lead to depression, anxiety, and worse.” Behaviors that can be as harmful as physical abuse include scolding, swearing, yelling, blaming, insulting, threatening, ridiculing, demeaning, and criticizing.”

Furthermore, according to this study, “Verbal abuse [that’s] constant and severe. . . creates a risk of post-traumatic stress disorder, the same type of psychological collapse experienced by combat troops in Iraq.”

In addition, the research in the study notes that children “who are the target of frequent verbal mistreatment exhibit higher rates of physical aggression, delinquency and social problems than other children.” The researchers found correlations with childhood verbal abuse and a significantly higher risk of developing unstable, angry personalities; narcissistic behavior; obsessive-compulsive disorders; and, paranoia.

Exposure to obscenity and profanity in the mass media, including video games, is also correlated with behavior, including aggression and violence.

There is research evidence showing that swearing in TV, movies and video games is related to adolescents adopting coarse language and aggressive behavior, according to a 2011 study published in the journal Pediatrics (http://pediatrics.aappublications.org/content/128/5/867).

VidAngel, a website offering filtering services for popular television shows and movies) (http://www.washingtontimes.com/news/2014/aug/20/kids-and-swear-words-can-profanity-in-media-hurt/), contends, “A family sitting down to watch a movie is shot with paintballs every time a swear word is uttered on-screen. Every word has impact. Protect yourself and your family.”

VidAngel has released an in-house study tracking profanity in movies from the first swear word on film (1939’s GONE WITH THE WIND) to 2013’s THE WOLF OF WALL STREET, which holds the record with 798 swearwords, an increase of nearly 800 percent over 74 years.

A study from Psychologist Timothy Jay, professor at the Massachusetts College of Liberal Arts, psychologist and researcher, published in 2010, found that children are swearing earlier and more often than the decade before.

“By the time kids go to school now, they’re saying all the words that we try to protect them from on television,” Jay told Live Science (http://www.livescience.com/8667-3-kids-learning-swear-earlier.html).

Jay asserts that the emotion and tone in which words are spoken have an impact on children, even infants. He also contends that what children hear outside the home has more impact if they are hearing the same in their homes but less impact if they are not.

To Harmon, the increase is symptomatic of bigger problems.

“Thoughts become words that can become actions,” he said. “Societies break down once they turn to violence or theft or sexual crimes. That’s a progression of the words. Where will our culture be in the future if we don’t take measures to be more civil?”

With fewer and fewer age-appropriate boundaries in homes, schools, media and more, children and youth are more and more at risk for confusion, depression, and aggression. Parents, guardians, and those in loco parentis need to safeguard children and youth and to help them navigate safely through stages in the development of their brains and social behaviors. Life is full of challenges for all ages and parents and supervisors can role model healthy choices, values and behaviors themselves and can provide other role models viscerally and virtually of healthy attitudes and actions.

Jim Caviezel, well known for his powerful portrayal of Jesus Christ in THE PASSION OF THE CHRIST, has been selected for the Harvey Award by the Jimmy Stewart Foundation. Jim is a good role model, especially for adolescents, on screen and off, as are many other actors on IMDB’S list of Christians in movies. Some notable athletes are also good role models on screen and off, such as Tim Tebow, Jeremy Linn and Drew Brees. Parents, guardians, and those in loco parentis need to expose the young people they supervise to good role models in media and in their everyday lives.

To protect your children from bad role models in the mass media, including any obscenity and profanity, please consult MOVIEGUIDE® every day so that your family can choose the good, reject the bad, and overcome evil with good (Isaiah 7:15, Romans 12:9 and Romans 12:21).