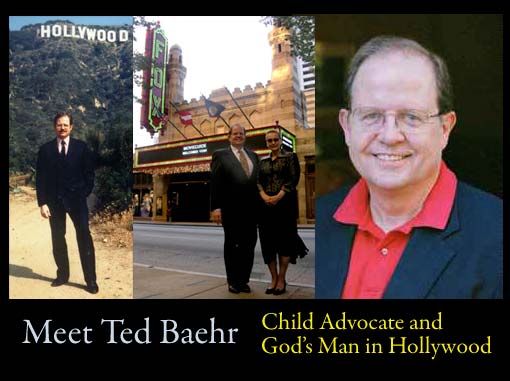 Part of the reason for the breakdown of morality in movies and television today, and in the culture at large, is that people of faith retreated from being salt and light in the culture.

From 1933 to 1966, Christians were one of the predominant forces in Hollywood. During that period, the Roman Catholic Legion of Decency and the Protestant Film Commission (which started several years after the Legion of Decency) read every script to ensure that movies represented the largest possible audience by adhering to high standards of decency. As a result, MR. SMITH [went] TO WASHINGTON, IT [was] A WONDERFUL LIFE and THE BELLS OF ST. MARY’S rang out across the land!

It took 10 years and God’s Grace acting through three dedicated Christian men to position God’s people to be such a powerful moral influence on Hollywood. As the videotape HOLLYWOOD UNCENSORED all too clearly demonstrates, prior to the involvement of these Christian men in 1933, American movies were morally bankrupt – full of nudity, perversity and violence. From 1922 to 1933, church-going men and women tried everything, including censorship boards, to influence Hollywood to make wholesome entertainment. Nothing succeeded until Christians volunteered to work alongside the Hollywood studios to help them reach the largest possible audience.

When the Protestant Film Office closed its advocacy offices in Hollywood in 1966 (in spite of many pleas to stay by the top Hollywood filmmakers), not only did it open the floodgates to violence (THE WILD BUNCH), sex and Satanism (ROSEMARY’S BABY), and perverse anti-religious bigotry (MIDNIGHT COWBOY), it also caused a severe drop in movie attendance from 44 million tickets sold per week to about 20 million.

In 1946, at the height of the Golden Age of Hollywood inspired by the Protestant Film Office and the Catholic Legion of Decency, Ted Baehr was born to Theodore Baehr (whose stage name was Robert “Tex” Allen) and Evelyn Peirce, both successful stage, screen, and television actors. Growing up in New York, Ted followed in his parents’ footsteps, performing in commercials, movies, television, and stage.

After studying abroad at the University of Munich, Germany; Cambridge University, England; and Bordeaux and Toulouse Universities in France, he graduated with high distinction in Comparative Literature and as a Rufus Choate Scholar from Dartmouth College. He then received his Juris Doctor from New York University School of Law, where he served as the editor of the NYU Law School newspaper.

It wasn’t until 1975 that Baehr’s life turned. While Ted was financing independent movies for Canon Films, a friend suggested that he read the Bible, which changed his perspective both professionally and personally.

Filled with the Holy Spirit through his faith in Jesus Christ, Baehr decided to attend seminary at the Institute of Theology at the Cathedral of St. John the Divine and received his Doctor of Humanities (HHD) from Belhaven College. He then accepted a position as the Director of the Television Center at the City University of New York and started the Good News Communications ministry in 1978. He also established the Episcopal Communicate Workshops.

During his tenure at CUNY, Baehr worked closely with academia, researching the impact of the media in education.

He was elected President of the Episcopal Radio & Television Foundation in 1979 and began conceptualizing another ministry, the Christian Film & Television Commission™.

His previous research into the influence of the mass media of entertainment became a primary topic for his talk on Television & Reality at the April 9, 1981 Conference on Culture and Communication convened by Dr. Stewart Hoover at Temple University. At the conference, Baehr received national recognition.

In 1983, while Ted was serving on the Communications Board of the National Council of Churches and the National Religious Broadcasters, the great movie producer Ken Wales (THE PINK PANTHER and CHRISTY) introduced Ted to George Heimrich and George’s work at the now-defunct Protestant Film Office. Inspired by George Heimrich and George’s beloved wife Lucille, Dr. Baehr began contacting prominent members of the entertainment industry, and in 1985, formed the Christian Film & Television Commission™ ministry and MOVIEGUIDE®: A Family Guide to Movies and Entertainment. Heimrich donated his Protestant Film Office files to the ministry, where they now reside. The ministry uses the same vision for positive change in those files to redeem the values of the mass media of entertainment according to biblical principles by influencing key entertainment executives to adopt higher standards and by informing and equipping the public, especially parents with children and families.

As a result of conversations with Sir John Templeton beginning in 1988, the Christian Film & Television Commission™ ministry initiated the Annual MOVIEGUIDE® Faith & Values Awards Gala and Report to the Entertainment Industry in 1992 in Los Angeles. The Gala, which now also features the prestigious John Templeton Foundation $50,000 Epiphany Prizes for Inspiring Movies & TV, the Templeton Foundation $25,000 Kairos Prize for Spiritually Uplifting Screenplays by New Screenwriters, the Ware Foundation $50,000 Libertas Prize for Promoting Positive American Values, and the Grace Award for Inspiring Performances in Movies & TV, seeks to acknowledge those movies, TV programs and actors truly deserving of praise, and those persons responsible for bringing them to the screen.

To add glamour to the event, actors and actresses are invited to MC and be presenters of the awards. Music and entertainment are also added to make it a memorable event. We also hand out Bibles and other redemptive materials to carry out our mission to reach Hollywood for Christ.

Within the context of an elegant affair, Dr. Baehr presents MOVIEGUIDE®’s “Report to the Entertainment Industry.” Through careful analysis of box office figures and MOVIEGUIDE® criteria on all the major movies released (nearly 300 a year) by the six studios controlling the industry, Ted gives valuable and unique information to the highest-level Hollywood leaders through a high-impact presentation. Thus, the purpose of the Gala and the Report is:

Many studio executives and entertainers are getting the message. More good movies are being made each year. Hollywood is being redeemed.