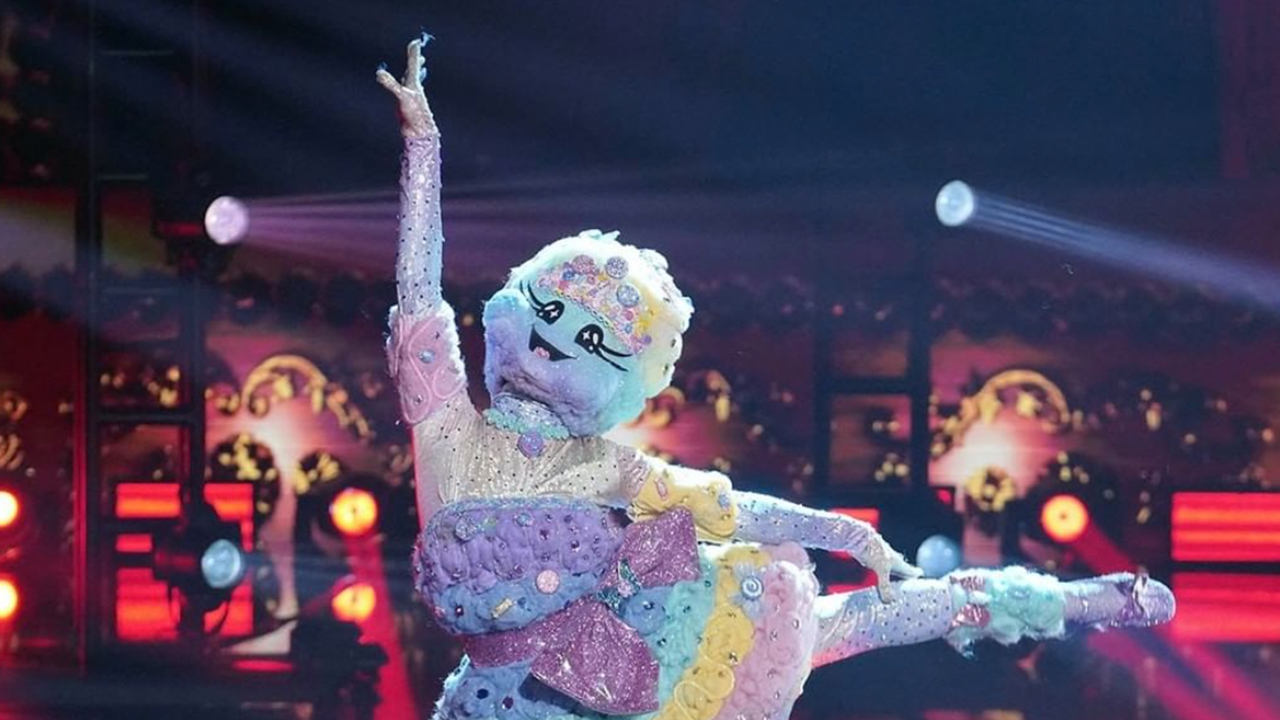 Olympic gymnast Gabby Douglas is no stranger to performing in front of thousands of people for a gold medal. But this year, Douglas took home the championship trophy on the Feb. 17 finale of Fox’s THE MASKED DANCER.

Douglas became the first winner of the competitive dance show where contestants are in costume to hide their identity until they are eliminated or win first place.

Douglas said that the show brought back memories of competing on the world stage in the Olympics.

Dressed in the Cotton Candy costume, Douglas edged out Mackenzie Ziegler as the Tulip in third place and the finale runner-up Maksim Chmerkovskiy as Sloth.

“I loved her different layers. I loved her big skirt, I loved her candy pieces, and her candy crown on the top,” Douglas said of her costume. “There were little gumdrops and little candies all around and glitter on her outfit. I loved her lashes and big smile and candy head. Wardrobe did such an amazing job with her costume, and I loved every inch of that costume.”

Douglas’ faith came through during the show, as well.

Some of the hints for Cotton Candy included holding her hands clasped in prayer.

When Judge Paula Abdul guessed it was Douglas, the former pop star said it was because she knew religion was very important to the gymnasts.

Despite her performances as a gymnast, Douglas said that THE MASKED DANCER was a completely new experience.

“I’ve never done anything like this before,” Douglas explained. “It was so different because I’m used to performing with just me and not with the whole get-up. It was fun. I got to go outside of myself, do something so new, be in character, and also dance at the same time. It was really fun.”

However, Douglas also made sure to include some of her gymnastics moves in her final performance.

“I was ready to go for it. I was talking with my producer. I absolutely love him. I was like, ‘Do you think we should flip or will that give it away?'” Douglas recalled. “He’s like, ‘We got to go out with a bang.’ And I’m like, ‘You know what? Let’s go! Add everything into this performance, and I’ll leave it out on the floor.’ So that’s what we did. The judges were close anyway, so we were like, why not?”

Now that the competition is over, Douglas expressed her thankfulness for the opportunity.

“It means so much to me. Just to be able to have this amazing journey, in my mind, I can’t even put words to it,” Douglas said. “The whole entire experience was so fun. I loved every single challenge. I loved putting in hard work and effort. It has honestly inspired and just kind of awakened this passion in me to even dance more.”

Douglas is open about how her faith in God played a role in her career as a gymnast, battling a deadly blood disease and homelessness as a child.

“Faith plays a very big role in my life. I don’t know where I would be without it today,” Douglas said in a 2012 interview with Religion News Service. “I’ve always been praying for everything. And my mom always exposed me and my siblings to being a Christian and the Bible.”

In another interview, Douglas said that her goal is to glorify God with the talent He has given to her.

“I love sharing my story and I love sharing about my faith,” Douglas said. “God has given me this amazing God-given talent, so I’m going to go out and glorify His name.”

Douglas shared her story in her 2012 book, “Grace, Gold & Glory My Leap of Faith,” and in the 2014 movie THE GABBY DOUGLAS STORY, which was honored at the annual Movieguide® Awards Gala with the Faith and Freedom® Prize.