Not So ANONYMOUS Politics at the Cineplex 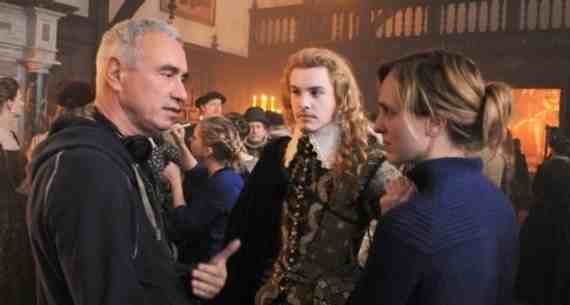 By Tom Snyder and Ted Baehr

There’s a controversial new movie opening this weekend in about 200 theaters across the U.S., titled ANONYMOUS. Set in the Elizabethan Age, the movie isn’t merely content with proposing that William Shakespeare didn’t write all those plays and sonnets. It also posits that the real alleged writer, Edward de

Veere, the Earl of Oxford, was [SPOILER ALERT] the secret son of Queen Elizabeth I and unknowingly became her lover. It also alleges that their son was the top co-conspirator in the 1601 rebellion by the Earl of Essex (see the 1939 movie ELIZABETH AND ESSEX with Bette Davis and Errol Flynn).

If that’s all ANONYMOUS did, it probably would be just another unimportant museum piece of 21st Century Pop Culture. Not content with just trashing William Shakespeare, however, the movie attaches a leftist political spin to its historical mimesis.

The movie opens with the great actor Derek Jacobi introducing the story as if it were a stage play being performed in New York City. The stage play quickly becomes a movie as Ben Jonson, the famous writer-to-be, is pursued through the streets by some royal soldiers. They demand to see some manuscripts he was carrying but wasn’t supposed to have. In the process, they deliberately burn down the Globe Theater.

Cut to five years earlier in 1598. Ben meets up with Edward, the Earl of Oxford. Edward wants Ben, who’s involved with the acting troop where actor Will Shakespeare performs, to start producing the plays he’s written, putting them under Ben’s name. The first play Edward gives him is HENRY V. The play is so good that Ben’s reluctant to take credit for writing the play. Then, when it’s performed to great success and the crowd wants to know who wrote it, Shakespeare steps forward and says he’s the author because a reluctant Ben wouldn’t.

At first, Edward’s very Ben didn’t attach his name to the play right away. However, since the die already has been cast, Edward starts attaching Shakespeare’s name to all the many plays Edward has written so far. The next play he hands Ben is ROMEO & JULIET, followed by JULIUS CAESAR.

Cut to about 40 years before. A young adolescent Edward is playing Puck in a scene from A MIDSUMMER NIGHT’S DREAM to a twentysomething Queen Elizabeth. Elizabeth is delighted by the scene and Edward’s performance. Then, jump to several years later when Edward’s father has died and Edward becomes the ward of Sir William Cecil, the Queen’s chief advisor and, for many years, her Secretary of State and, eventually, her Lord High Treasurer. This William Cecil is a strict Puritan (a point that’s historically and patently false) who thinks plays and theater are the work of the Devil. Under William’s hard rule, Edward is forced to keep his playwriting and poetry a strict secret.

Eventually, Edward and Queen Elizabeth start an affair, even though she’s 17 years older according to the history books and even though Edward has married Cecil’s daughter. When Elizabeth becomes pregnant by Edward, William advises her to have the baby in secret and never tell Edward. Of course, later, William’s creepy hunchbacked son, Robert, informs a middle-aged Edward that his father knew that Edward was also Elizabeth’s son [a totally unproven accusation in real life], hence the biggest reason Edward was never told about their own son.

Cut back to some time after Elizabeth’s pregnancy. Feeling spurned by the Queen, Edward gets in trouble when he gets one of her female attendants pregnant. This is the last straw for William, who banishes Edward from the court. In return for his silence, Edward forces William to tell him what royal family adopted his son with Elizabeth.

At this point, the plot and its biggest conflict start to become clearer. Edward is trying to use his anonymous plays to create public sentiment against the powerful Cecil family, both William and his son, Robert. Eventually, the movie comes to a climax in 1601 as Edward tries to use the Earl of Essex and his play RICHARD III to get rid of Robert Cecil, who’s now taken over for his late father. As Edward tells Jonson at one point, “All art is political. Otherwise, it is just decoration.”

Not only does ANONYMOUS trash the professional life of William Shakespeare, it also accuses him of deliberately murdering the playwright Christopher Marlowe, when it’s a solid historical fact that Marlowe was killed in self-defense during a tavern brawl by another fellow entirely. Also, in addition to making viewers believe Shakespeare didn’t write his plays, the movie tells viewers that the fellow who did write them was actually the secret son of Queen Elizabeth I who also (albeit unknowingly) had incestuous relations with the Queen(!!!).

This lurid, mindless speculation is combined with an accusation that the Queen’s chief advisor, William Cecil, was a kneejerk Puritan snob who hated art, beauty, and theater. Although there’s little evidence that Cecil was a fan of the theater like Queen Elizabeth and her successor, James I, he wasn’t a Puritan. He was just a leader who was more concerned about his country and politics than he was about art. In fact, according to the historical record, he probably wasn’t a religious fanatic but rather a religious pragmatist who, like Queen Elizabeth herself, believed that England was better served by remaining a Protestant nation rather than being a Catholic one ruled by the Pope or, worse, split into two factions between Catholics and Protestants. Thus, political power was probably far more important to Cecil and his son, not religious sentiments against art per se.

Interestingly, the movie contradicts itself concerning one major aspect. In one scene, Edward tells his wife (another alleged Puritan “meanie”) he can’t stop writing because the characters and their words just come out of him, like he’s a man possessed. In the rest of the movie, however, Edward is clearly shown calculatingly using his plays purely as a political scheme to enrage the mob politically to get rid of the Queen’s chief advisors, William Cecil and his son, Robert. Toward the end, this Neo-Marxist theory about art as politics is put on the back burner again. Thus, at the end, the movie tries to make viewers believe that these Elizabethan plays and poems not only represent the “soul of the age,” as the real Ben Jonson said (while attributing them to William Shakespeare, by the way), but that they also transcend all ages because of the sublime  of their verse. Of course, in none of these highfalutin statements about art does the movie intimate any sense of the divine creation or inspiration of the God behind it all.

Thus, ANONYMOUS not only has extremely ludicrous revisionist history, it has a confused combination of Romantic ideas with humanist political ones. Both types of ideas, however, fit in with the movie’s apparent attack on Christianity wherein the movie makes its two biggest antagonists or villains Puritan Christians. Of course, attacking Christianity is the primary reason for all left-wing politics, including the movement toward political correctness, which stems from a group of Marxist activists in the last century (see Chapter 10 of THE CULTURE-WISE FAMILY by Ted Baehr and Pat Boone, Regal Books 2007). As Communist dictator Joseph Stalin reportedly once said, “America is like a healthy body and its resistance is threefold:  its patriotism, its morality and its spiritual life. If we can undermine these three areas, America will collapse from within.”

Finally, in addition to getting the character of William Cecil wrong and inventing outrageous lies about the tragic death of Marlowe, ANONYMOUS constantly gets about all its dates wrong for Shakespeare’s plays. For example, HENRY V wasn’t the first Shakespeare play to be performed, and it wasn’t first performed in 1598 but in 1599. ANONYMOUS also depicts Edward as having written A MIDSUMMER NIGHT’S DREAM as a child in 1558 or ’59 when it couldn’t have been written until 1595.

You don’t have to be a Shakespeare snob to be outraged by all of this. All you have to be is a fair-minded, thoughtful person who takes seriously God’s commandment not to bear false witness against other people (Exodus 20:16). Just because a person is dead doesn’t nullify this commandment.

MOVIEGUIDE® read an alleged comment by the director that his movie arrives an “emotional truth” rather than some kind of literal truth. If this is true, it’s completely ridiculous. Even if there were such a thing as “emotional truth,” such truth could not be arrived at by distorting and falsifying historical truth, especially to the point of personal slander. Which is just what ANONYMOUS does. Ultimately, all real truth is God’s truth, and the Bible is the ultimate authority for that truth. Or, as the Apostle St. Paul writes in 2 Timothy 3:16, “All Scripture is God-breathed and is useful for teaching, rebuking, correcting and training in righteousness, so that the servant of God may be thoroughly equipped for every good work.”

Obviously, revisionist history is not a “good work” but a violation of God’s Moral Law set forth in the Bible. This is especially true when it’s combined, as in ANONYMOUS, with Romantic, Marxist notions of art that undermine the Good, the True, and the Beautiful.

Editor’s Note:  Ted Baehr is publisher of MOVIEGUIDE®:  The Family Guide to Mvies and Entertainment, www.movieguide.org, and chairman of the Christian Film & Television Commission® ministry (CFTVC). Tom Snyder is editor of MOVIEGUIDE® and a Vice President at CFTVC.